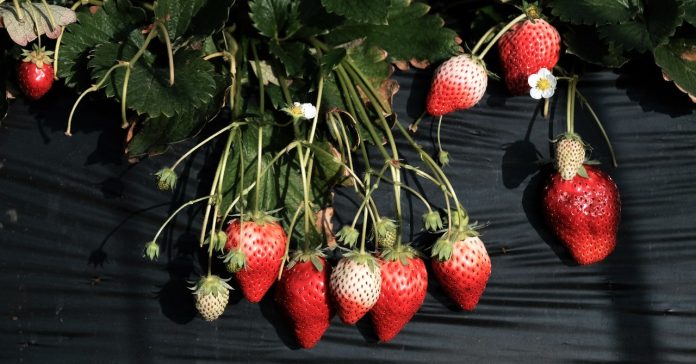 Rhee said Traptic stood out from other companies in the space because its robot doesn’t touch the strawberry. Instead it grabs strawberries by the stem, pulling strongly enough to detach the fruit but lightly enough to avoid damaging the rest of the plant.

Such tasks are an ongoing challenge. A recent study reviewed nearly 50 harvesting robot projects from 2000 to 2020 and found that harvesting robots have yet to see widespread use, in large part because most robots still can’t do a better job than a human.

Hugh Zhou is lead author of an analysis of AI progress in fruit-harvesting robots and their commercial viability. The study was carried out by researchers developing an apple-harvesting robot at Monash University in Australia. Based on what’s possible today, Zhou said he can envision a scenario in which robots pick 70 percent of easy-to-classify strawberries and humans pick the remaining crop. It’s just in recent years that HarvestCROO Robotics and a handful of other companies have advanced their systems to the point that they’re picking strawberries at rates competitive with people.

“It’s one of those problems that we’ve mostly gotten through, but the last few percent are going to be hard to build up.”

Zhou says the makers of fruit-harvesting robots are heavy on demo videos and light on data. The majority don’t share damage rates publicly, or how well their vision systems perform when picking strawberries from clusters or strawberries partly hidden behind leaves, two primary reasons computer vision systems fail to pick fruit. Crushing or bruising berries is still a common problem, and accidentally harming one strawberry while attempting to pick another is a problem that is often overlooked and rarely mentioned.

Companies working with robots to harvest fruit say there are reasons many haven’t moved out of the prototype stage and only a handful of machines are in operation today.

In April 2021, AppHarvest, operator of the largest greenhouse in the US, acquired Root.ai, a Somerville, Massachusetts-based company whose Virgo machine picks grape tomatoes with a small, three-pronged robotic gripper. That technology is now used to pick strawberries and cucumbers as well, using four- and eight-fingered grippers. As part of the deal, Root.ai CEO Josh Lessing became CTO at AppHarvest.

Picking rates have doubled since the acquisition, Lessing says. He says the company now wants to reduce the cost of the robots as it moves toward finalizing Virgo hardware in 2023.

Today Virgo picks healthy fruit better than most people, but it needs to improve its ability to detect ripeness and damage less fruit before being deployed in widespread use. Reducing the damage rate is tied to more use of soft grippers and passive forms of robotic control, says Lessing, a former research director at Soft Robotics.

Proponents of agricultural computer vision systems argue that being able to predict when fruit is ripe will lead to improved sales, reduced waste, and yield gains as the global population expands to 10 billion.

Robots can also help grow and market expensive specialty fruits. Robots working in tandem with automated vision systems can monitor crops 24 hours a day to predict the ideal time to pick a ripe, red strawberry. The startup Oishii raised $50 million last fall for its vertical farming operation as it works to replicate the process of growing sweet Omakase strawberries typically found in the Japanese Alps. A box of 11 berries goes for $50.

Advanced Farm operates 10 robotic picking machines at Blazer Wilkinson strawberry farms in Central California. Each machine can pick roughly 100 pounds of strawberries an hour. Tarps drape along the top and the side of a machine that sits atop two rows of strawberries at once. The tarps keep out light and help cameras and computer vision systems classify fruit and control robotic arms—light can affect the computer vision system, so the machines mostly operate at night.

Each time a ripe strawberry is identified, a silicone robotic hand with a suction cup in the middle moves in, grabs the strawberry, and then uses three fingers to twist it away from the stem and place it in a bin. Advanced Farm designed nearly 50 versions before deciding on the current design of its picking system.

Advanced Farm cofounder Kyle Cobb says the company’s robots are “in the ballpark” but are still more expensive than human strawberry pickers. “It’s one of those problems that we’ve mostly gotten through, but like with all problems with robotic harvesting, the last few percent are going to be hard to build up,” he says.