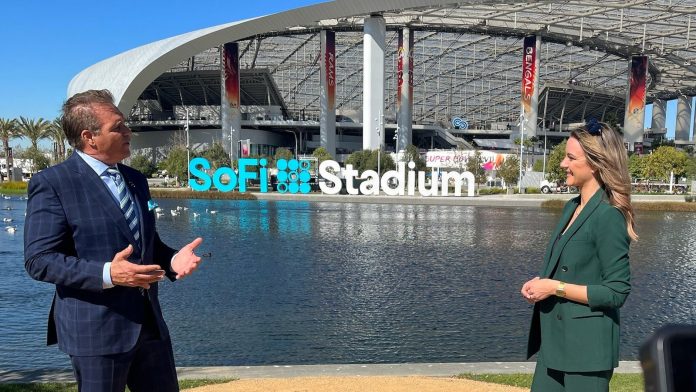 Sky Sports NFL’s Hannah Wilkes is in Los Angeles for all of the build-up to Super Bowl LVI at SoFi Stadium on Sunday, bringing you her daily diary as she goes behind-the-scenes at Super Bowl week…

Hello from Los Angeles! Super Bowl LVI is finally here and so are we! Well, four of us are.

The main show on Sky Sports NFL is back at base come Sunday, but our crew on the ground will bring you all of the build-up to the big game from the City of Ángels itself.

Friday in L.A. and the fans have very much arrived. Jerseys of multiple colours are all over downtown, but plenty of the blue and yellow of the Rams, in particular – they are at home after all!

Tickets for SoFi Stadium on Sunday are officially harder to get hold of than the golden snitch (more on this Harry Potter reference later). ‘Get in’ tickets are reselling for a massive $3,000 a pop, with the average ticket a whopping $8,000, according to some re-sale websites.

Our day started with a hotel move; traffic in L.A. is beyond belief and with most of the Radio Row activities now wrapped up, we need to be closer to the stadium for Sunday (logistics, yay!).

Then it was over to SoFi itself for a chat in the sun with Brian Baldinger for the Super Bowl preview show of Inside The Huddle (Sky Sports NFL, Saturday, 9pm), before heading back downtown to speak to New York Jets captain C.J. Mosely.

Turns out C.J. is a FIFA-playing Chelsea fan and is very excited by the prospect of more time in London, with the Jets being awarded marketing rights in the UK. He also said he’s only in L.A. for a couple of days – he refuses to go to a Super Bowl until he’s playing in one.

We finished the day with… well, a trip to Universal Studios. The official media party of this year’s Super Bowl had our crew giddy with childlike glee racing between rides and studio tours, including a couple of flights around Hogwarts.

Safe to say the NFL is really leaning into the Hollywood element of an L.A. Super Bowl!

Thursday’s lineup of interviewees looked a little like this:

UK in the house! @bcope51 talking to fans across the pond with the rockstar @hannahjwilkes! pic.twitter.com/Nda5oKK7zF

A productive day all round, but shout out to Producer Greg who kept his chin up (and jeans intact) after approaching and being turned down for interviews by Justin Herbert, CeeDee Lamb and Dak Prescott in quick succession.

Not to sound too smug but… I’m writing this while sat on Santa Monica Beach, watching the Pacific tide roll in, in glorious 30 degree weather. And I am genuinely working. Ha!

In fact, I’m on ‘tide watch’ to make sure no camera equipment gets ruined whilst we film a very special ‘Baldy’s Breakdown’ for the pre-game show on Sunday. It’s a tough job, but someone’s got to do it!

Brian Baldinger has indeed joined us, so our tiny on-site crew is now up to five. The former offensive lineman is a font of all NFL knowledge, with some great top-secret nuggets (sorry!), but the biggest revelation in just one day of Baldy’s company is unquestionably that Eminem name drops him in ‘Legacy’. Having checked the lyrics, I’m not entirely sure it was a compliment but what a claim to fame!

Big news today for European NFL fans, with Munich being announced as the first German city to host a regular season NFL game. Over the next four years, they’ll rotate between Bayern Munich’s stadium and Frankfurt Stadium in, well, Frankfurt. Add in a further two games at the Tottenham Hotspur Stadium and the Jacksonville Jaguars’ return to Wembley, and the 2022 season is shaping up nicely.

Plenty of familiar faces to us Brits haunting Radio Row today. Jason Bell and Osi Umenyiora stopped by for a Sky Sports News cross (Osi said my outfit was “very L.A.”, mission accomplished) and we caught up with London’s own Efe Obada.

Efe was super candid about his first season with the Buffalo Bills, how the team are still hurting from their divisional round loss to the Kansas City Chiefs and was very humble about sacking Tom Brady. You can catch more from him on Inside the Huddle this week.

Day Two in L.A., and with a significantly better rested crew, we headed out bright and early to capture some of the events happening around game week.

First stop was an NFL Green Huddle event at a community space in South Central L.A. called ‘A Place Called Home’. With a little help from the Rams, including mascot Rampage and a couple of cheerleaders, 56 garden walls were being planted by volunteers to be delivered to local families to help them have access to fresh vegetables, eat better and live more sustainably.

It’s so impressive to see what an impact the Super Bowl has on the cities it takes over; it goes much further than the game itself.

A quick ride across town and we were back on Radio Row, which was a whole lot busier than on Monday. Pat McAfee was holding court filming his show as we walked in (that guy is LOUD!) and across the way our pals from Around The NFL were on stage recording their Tuesday show.

We grabbed the wonderful Coleen Wolfe from NFL Network for a chat – catch this on Inside the Huddle (Wednesday, 9pm, Sky Sports NFL) – and as a true Philadelphian she managed to squeeze in a mention of the Eagles’ Super Bowl LII win into our chat. Flawless.

Michael Carter, the New York Jets rookie running back, was also on the ‘row and waxed lyrical about playing in London back in October (his British accent still needs some work).

Carter put up 172 total yards up in the Jets’ Week Eight victory over the Bengals and admitted that he may have started himself in Fantasy Football that week (top points scorer, good call!) but he doubts the Rams are using his game tape to prep – “they’re a very different team now”, he said of the Bengals.

To wrap up our Tuesday, we headed out to catch the ‘Stars and Stripes Bowl’, which involved NFL Alumni, local kids and military veterans playing flag football with Hall of Famer Kurt Warner and our pal Ryan Leaf under center.

National anthems, BBQ, and flag football under Tuesday night lights. A winning combo! … Although not for producer Greg, who had to make an emergency shopping trip after a “trouser split” situation.

In fact, two of our four-person crew had slight shockers today. The ‘golf caddy catastrophe’ of Monday has revealed to be entirely the fault of production manager Rhys, despite his insistence that it was “just a really dodgy one”.

We’ve been in town just over 24 hours and we’ve crammed quite a lot into them. I’ve noted a few things down for your entertainment…

Touchdown in the USA! Bamboozled by an immigration officer whistling a happy tune.

Like true Brits abroad, we’re in an Irish Bar for dinner – complete with an unexpected Eminem singalong to get us ready for the half-time show.

Super Bowl media credentials collected, we are IN!

We head straight to ‘Radio Row’ for our first live hit on Sky Sports News. Radio Row is where literally rows and rows of all of the global media organisations covering the Super Bowl will be housed under the same roof.

We bump into former NFL quarterback Ryan Leaf and discover he’s under center for a flag football game on Tuesday night. He joked on NFL Overtime this season that he wanted to go for Tom Brady’s touchdown pass record – it’s on!

Popped into the ‘Super Bowl Experience’ to film a couple more links. It’s like one giant NFL theme park and will be absolutely buzzing when it opens to fans on Thursday.

Headed to SoFi Stadium to film a couple of pieces to camera. It’s already humming with activity, although we can’t get into the stadium itself – it’s locked down until Sunday so the half-time show, anthems and all the pageantry can be rehearsed in top secret.

While our cameraman supremo Si captures some “art”, producer Greg is temporarily recruited as an iPhone cameraman for another reporter. After seriously working the angles for the guy we manage to reclaim Greg as our own.

A small incident involving the world’s worst golf cart. No one harmed, but pride damaged!

Back to the ‘Super Bowl Experience’ to film a Sky Sports News piece with friend of Sky Sports NFL, The Ringer‘s Nora Princiotti.

With Tom Brady’s “never say never” comments regarding a comeback, and Nora’s background as the Patriots’ beat reporter I ask her about that first… and get a laugh!

Brady eh? We’re still talking about him during Super Bowl week whether he’s here or not.

Watch Super Bowl LVI live on Sky Sports NFL and Main Event from 10pm on Sunday, February 13, with current players Kirk Cousins and Calais Campbell, and Hall of Famer Warren Moon among the guests joining Neil Reynolds for 90 minutes of build-up to the big game.