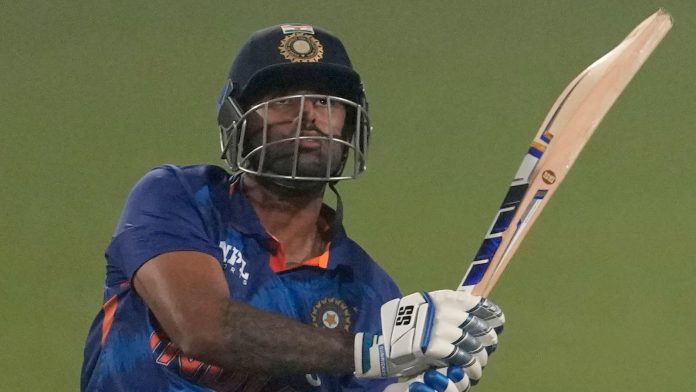 India beat West Indies by six wickets in the first T20 international to go 1-0 up in the three-match series; Nicholas Pooran smashed 61 from 43 balls to help take the visitors to 157-7 but Suryakumar Yadav (34no from 18) ensured India got home with seven balls to spare in Kolkata

Suryakumar Yadav smacked 34 off 18 balls as India beat West Indies by six wickets in the first Twenty20 on Wednesday.

The 31-year-old was unbeaten as he hit five fours and a six to rescue India from a precarious 95-3. He put on 48 off 26 balls with Venkatesh Iyer (24 not out) to seal the game with seven balls to spare.

“The outfield was quick because of dew and it gave us an advantage,” Suryakumar said. “It was an important partnership with Venkatesh. When he came in the difference [in scores] was just eight runs. We decided not to play fancy shots, just good cricket shots. I am really happy the way he played.”

Chasing 158, Rohit Sharma provided a quick start to the Indian innings by thumping 40 off 19 balls, including four fours and three sixes.

Sharma and Ishan Kishan (35) put on 64 off 45 balls for the first wicket but the skipper holed out off Roston Chase (2-14) in the eighth over and the innings came unstuck. Chase also accounted for Kishan, who played an uncharacteristic knock off 42 balls.

Virat Kohli (12) struggled to get going again, caught in the deep off Fabian Allen as India were reduced to 95-3 from 64-1 in the space of five overs.

Yadav and Rishabh Pant (8) pushed the score past 100 before Cottrell accounted for Pant.

India’s chase became a struggle at 114-4 when Suryakumar and Iyer came together to salvage a win. Iyer hit two fours and a six, the latter to finish the game.

West Indies lost Brandon King (4) early to Bhuvneshwar Kumar but Kyle Mayers and Pooran then added 49 runs off 36 deliveries for the second wicket.

Debutant Ravi Bishnoi struck twice in the 11th over, trapping Roston Chase lbw and then Rovman Powell holed out. Bishnoi was named man of the match after picking up 2-17 from four overs.

“I was both nervous and excited [on debut],” he said. “I just tried to bowl stump to stump as the ball was skidding a bit. I did not want to give them room to clear the boundary with power.”

Pooran counter-attacked and led the West Indies resistance as the visitors scored 67 runs off the last 6.1 overs.

He hit four fours and five sixes, completing his half-century off 38 balls. Kieron Pollard scored 24 not out off 19 balls to push the score past 150.

The second T20 in the three-match series will be played on Friday at Eden Gardens again.

Watch the second T20 international between India and West Indies from 1.30pm, Friday on Sky Sports Cricket and Main Event.