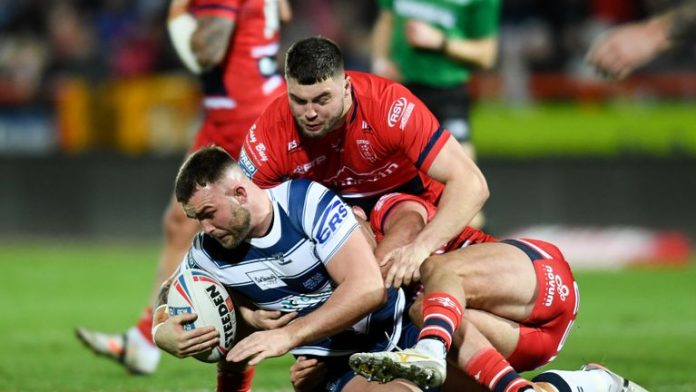 When Matt Peet helped persuade Brad Singleton to join Wigan in 2020, little did the prop know he was destined to become his future head coach; Watch the Warriors take on Leeds live on Sky Sports Arena on Friday from 7.30pm (8pm kick-off)

When Brad Singleton was among those players left without a club following the collapse of Toronto Wolfpack during the 2020 Betfred Super League season, it was his future Wigan Warriors head coach who played a big role in him signing for the Cherry and Whites.

Conversations with then-Warriors assistant Matt Peet played a big part in the prop opting to sign a three-year contract at the DW Stadium and 18 months later the Ireland international is now firmly established as a cornerstone of the pack.

That time has seen long-serving coach Peet ascend to the top job this season as well after being named as Adrian Lam’s successor, and Singleton is pleased with how things are progressing ahead of the clash with another of his former clubs Leeds Rhinos, live on Sky Sports on Friday.

“When I was in that position of basically being unemployed with Toronto, I had conversations with a few coaches,” Singleton said.

“When me and Matty spoke, we spoke for a while, and I was quite delicate picking where I needed to go next. When I was in that position, I needed a place I knew was right for me and my family and he was the one who pulled that over the line.

“It was quite a smooth transition with Matty being here for a long time and he’s pulled a lot of these lads through the ranks.

“He’s a familiar face, we do know his ethos and he’s got a chance to grab hold of the group and we’ll see how it pays off, but the early signs are good.”

Singleton looks set to continue as a cornerstone of the pack under Peet, having started in last Friday’s season-opening 24-10 win away to Hull Kingston Rovers.

Given he played such a big behind-the-scenes role in bringing the Ireland international to Wigan as well, it should come as no surprise the head coach is an admirer of what he brings to the squad both on and off the field.

“He’s a genuine pack leader, he knows his role and he’s probably in some ways old-school front-rower,” Peet said of Singleton.

“He carries the ball strong, he runs hard and tackles hard, and he’s very committed to the team. He’s very professional, he communicates well and he’s a genuine quality club member as well as what he does on the field.”

When me and Matty [Peet] spoke, we spoke for a while, and I was quite delicate picking where I needed to go next. When I was in that position, I needed a place I knew was right for me and my family and he was the one who pulled that over the line.

Brad Singleton on Matt Peet’s influence in him joining Wigan

Joining Wigan brought Singleton to the Super League club he supported as a child growing up in Barrow, although it was at Leeds where he earned his opportunity to play at the highest level after being brought into their youth system in 2009 from community club Barrow Island.

He made his Super League debut two years later and his nine seasons with the Rhinos saw him earn Grand Final winners’ rings in 2015 and 2017, along with being part of their 2015 Challenge Cup triumph as well.

Naturally, that period of his career holds many happy memories for Singleton, but he is determined to celebrate lifting more major trophies in the current chapter of his career he is writing with the Warriors too – having already helped them claim the League Leaders’ Shield and a Grand Final appearance in 2020.

“I treat my career like a story and that chapter has got some fond memories of some great teams and great team-mates who’ve gone on to do extreme and beyond things, and I’m really grateful for that.

“I don’t mind playing them, they’re always going to be an exciting club with a big following and now being at Wigan, two of the biggest sides in Super League going at it is always great to be involved in.”

Sky Sports will again be broadcasting extensive live coverage of the Betfred Super League in 2022, including 25 games between February and April, Magic Weekend and the Grand Final. Watch former Super League champions Wigan and Leeds go head-to-head at the DW Stadium on Friday live on Sky Sports Arena from 7.30pm (kick-off 8pm).