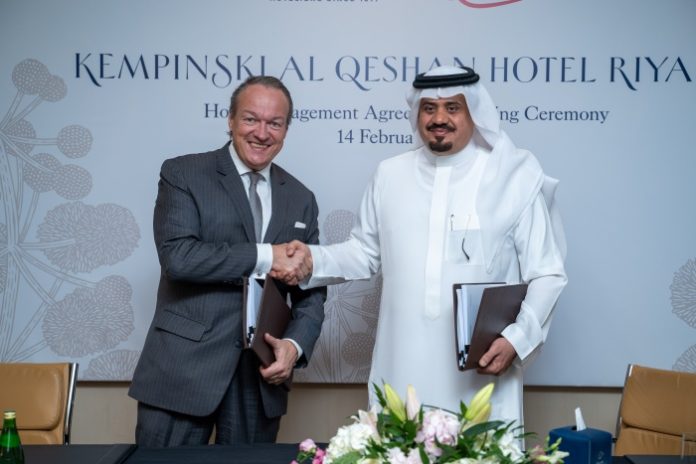 The Kempinski portfolio is steadily growing in the Middle East with plans for Al Qeshan Hotel unveiled.

With the signing of a management agreement for a prestigious luxury hotel in Riyadh, the capital of Saudi Arabia, another milestone in the expansion of the international hotel group has been set.

The upcoming five-star Kempinski Al Qeshan Hotel is being built in a prime location in the heart of the Al Olaya business district on the famous King Fahad Road.

The hotel, with 150 elegant rooms and suites as well as ten serviced apartments, is planned to be built and opened in approximately four years.

With this luxury hotel, the owner is not only focusing on technical and structural sustainability, but has also included a full green façade in the plans.

Bernold Schroeder, chief executive of Kempinski Group, said: “The property in the financial capital signifies an important step in our growth plans in the kingdom of Saudi Arabia.

“Following other projects in our development pipeline in Al Madinah, Makkah and Yanbu, as well as our already successfully operating Kempinski Hotel Al Othman in Al Khobar, we look forward to welcoming guests to the capital of Saudi Arabia in the future.”

Located on a desert plateau, the city of Riyadh is a place where old-world charm meets modernity and visions of the future, Schroeder added.

Oil tankers are getting stuck in the Black Sea. That could become a problem