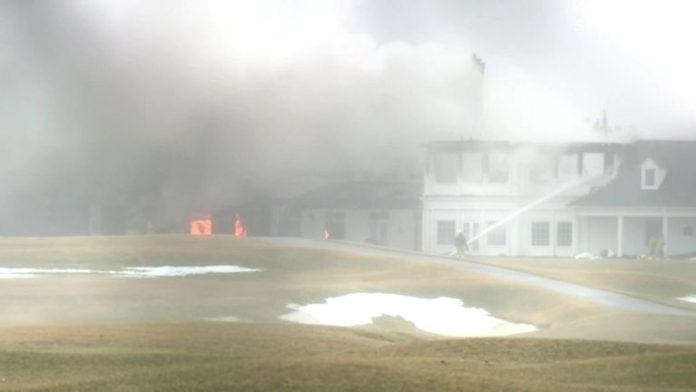 A devastating fire has torn through Oakland Hills Country Club, inflicting “extensive damage” to the clubhouse at the course famed for hosting the 2004 Ryder Cup.

Breath-taking eyewitness videos and images showed the wooden structure – based 15 miles outside Detroit, Michigan – ablaze and engulfed by plumes of black smoke as firefighters worked to douse the flames on Thursday.

Local reports say the blaze broke out at around 10am – and that every firefighter in the area was called to tackle the fire. The cause of the blaze at the sprawling, multi-story clubhouse in Bloomfield Township, is not yet known.

The clubhouse, built in 1922, was the venue where Padraig Harrington won the PGA Championship in 2008 – and where Europe won the Ryder Cup in 2004 – and was home to irreplaceable golf tournament memorabilia and art, all believed to have been lost or damaged to the blaze.

“At this point, the core of this building right in front of us, is almost a total loss,” local fire chief John LeRoy said. “What you see here is the entire centre of the building has sustained extensive damage.

The roof of the Oakland Hills clubhouse is understood to have collapsed shortly after fire chief LeRoy’s statement.

1/2 We thank the Bloomfield Township Fire Department and all the agencies who are assisting the ongoing situation at Oakland Hills Country Club. Thank you to the public for being understanding with all of the traffic issues necessary to get the trucks and equipment on scene.

‘A century of memorabilia lost’

Oakland Hills opened in 1916, has hosted more than a dozen major golf championships, including the Ryder Cup and the PGA Championship.

Brad Galli, Sports Director at Detroit-based TV station WXYZ, said a century of golfing memorabilia had been lost to the flames, as well as any aspirations to host major tournaments in the immediate future.

“Jack Nicklaus, Gary Player, Tom Watson, you name any golfer that has been relevant over the last century, they have played at Oakland Hills and more than likely had success there,” Galli told Sky Sports News.

“This course which has welcomed many of the biggest names in golf is suffering; the roof has almost completely caved in, there are still pockets of fire in the clubhouse, and the fire hydrants are having a tough time trying to get some of the fire contained.

“The course has just undergone $12million of renovation in a bid to land a U.S. Open, but this has put a big dampener on those plans.

“The good news is that everybody onsite is safe, the big disappointment is that a centuries-worth of memorabilia has been lost. Miniature Ryder Cup trophies, autographed photos, clubs that were used by some of the greats of the game, those are just some of the things that have been lost.”