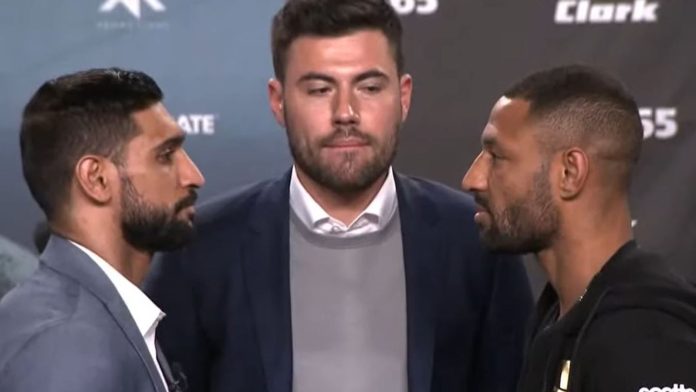 Amir Khan says Kell Brook’s use of the phrase “poppadom chin” was racist; Kell Brook: “I regret the language I used but I am not a racist”; Khan caused controversy by making innuendos about Brook’s sexuality; he believes what he said was not homophobic

Khan, who was born and raised in Bolton to Pakistani parents, brought up comments Brook has previously made about him having a “poppadom chin” and is convinced the comment carried racial connotations.

“Before the fight we don’t get on, we don’t respect each other, but come fight night that will be the time when we will see who the better fighter is but before anything like that when race gets involved it just messes things up and I’m quite upset he came out with that comment.”

In a separate interview with the PA news agency, Khan unequivocally accused Brook of being a racist, saying: “It’s so sad that, that he had to come out with a comment like that.

“I respected him as a fighter…that’s gone out the window now. I thought maybe after the fight we could be friends, I don’t want to be his friend.

“People look up to Kell Brook, he’s on the biggest stage of his career. The reason we have to talk about this and get it out there is so people realise giving racial [abuse] should not happen and we are totally against it.

“Everyone needs to be on that and say ‘it shouldn’t happen’. People shouldn’t be racist, especially in this day and age, come on. We’re in the 21st century and we shouldn’t hear anything racial now. But it is still out there.”

Brook has vehemently denied being a racist arguing his only intention was to comment on the brittleness of Khan’s chin. But he has said in hindsight he regrets his choice of words.

Brook said: “He’s obviously going down the line of me being racist. Most of my close friends are Asian. The original Amir Khan was going to be in my corner so he’s obviously wanting to get the people thinking I’m racist but I’m absolutely not. All I was saying was how fragile the poppadom is and his chin is brittle like that. Looking back now I regret it. There’s nothing behind it.”

Khan also caused controversy at the news conference when he appeared to mock Brook while making innuendos about his sexuality.

When asked by Sky Sports News whether he would like to retract or apologise for his comments, Khan’s response was that nobody in his camp considered he had done anything wrong. Khan’s position is that what he said was not homophobic. Khan has publicly questioned Brook’s sexuality in the past in at least one interview in 2018.

Promoter Ben Shalom condemned the language they used and has spoken to both fighters to remind them of their responsibilities.

Shalom earlier said: “There is absolutely no room for racism or homophobia anywhere, never mind in boxing which is the biggest equalising sport that we’ve ever seen.

“Once you get in the ring, it brings communities together and brings diversity into sport. We have reminded both guys that there is no room for it. I’m disappointed with them.”

Smith: Both fighters have let themselves down

Sky Sports head of boxing development describes the Amir Khan and Kell Brook press conference as uncomfortable and unsavoury and says both fighters let themselves down.

Sky Sports head of boxing development Adam Smith was on stage during the exchange and said: “It was uncomfortable being up there, it was unsavoury, very unprofessional and just wrong of both fighters today.

“We’ve had such a great build-up and it’s been fantastic to see the line not crossed, and now they’ve let themselves down badly today and there’s no in boxing for anything like that – racist, homophobic slurs – terrible.

“I’ve been speaking to Robert Smith, the general secretary of the British Board of Boxing Control, who likewise was horrified by it, and he said that he will go and speak to both camps straight away.

“We’ve got plans in place tomorrow (Friday) to make sure that the fighters are kept apart, aside from one face-to-face, and just calm everybody down, because there are high emotions, they’re making weight, it’s an itchy time for the fighters but they let themselves down.”