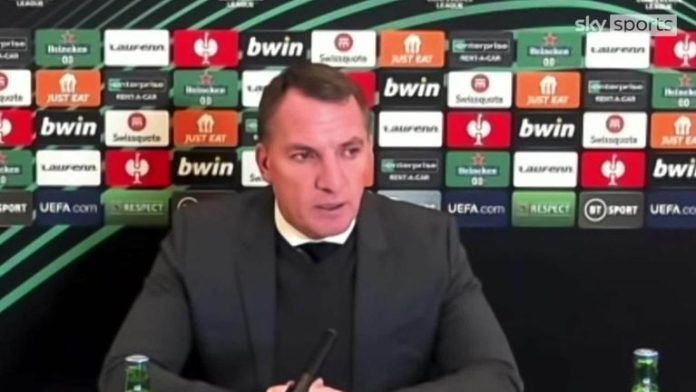 Leicester breezed into a commanding 4-1 advantage in the first leg of their Europa Conference League knockout play-off against Randers, but James Maddison was forced off during the second period after requiring medical attention.

The Foxes took the lead in the 23rd minute when Wilfred Ndidi exchanged passes with Ademola Lookman before side-footing the ball into the bottom corner.

Leicester regained the lead four minutes into the second half as after Lookman tried to get a strike away, the ball broke to Harvey Barnes and he turned and fired into the net.

Leicester City manager Brendan Rodgers says he is happy with the performance against Randers and feels his team dominated the game.

Six minutes later Brendan Rodgers’ men were 3-1 up, with Patson Daka diverting the loose ball in after Youri Tielemans’ shot was parried by Patrik Carlgren.

Kiernan Dewsbury-Hall made it 4-1 in the 74th minute, sweeping the ball in having been teed up by Lookman. Maddison fell unopposed not long after coming off the bench with the midfielder withdrawn as a precaution as a team of medics rushed to assist him but he was able to leave the field unattended.

“He [James Maddison] wasn’t feeling well so we took him off,” Rodgers confirmed afterwards. “He is in with the medics and he feels fine.”

Man of the match: Kiernan Dewsbury-Hall.

Speaking in his pre-match press conference, Rodgers acknowledged his side had been struggling to defend the dead ball but stressed they would been working hard on their “concentration, will and ruthlessness”.

It was a tie with special meaning for Leicester’s Danish duo Kasper Schmeichel and Jannik Vestergaard. Some 600 supporters travelled over to the Midlands from Denmark for their club’s first competitive outing in England.

Randers did not exist when Schmeichel began his career in the Manchester City youth set-up but they have established themselves in the Danish top flight and are seven points off the lead ahead of the resumption following their winter break.

Brendan Rodgers named a strong side as Leicester hosted Danish side Randers in the first leg of their Europa Conference League play-off.

The Foxes boss made just two changes from the side that drew with West Ham as Marc Albrighton and Jannik Vestergaard replaced James Justin and Ricardo Pereira for the clash at the King Power Stadium.

Justin was ruled out through injury and Pereira was rested as he is eased back into action following his recent return to action.

This was one of the biggest games in their 19-year existence but save for a shot from Tosin Kehinde, Randers were forced to do plenty of defending early on.

Their task was to ensure this tie was still alive ahead of next week’s return leg, but they fell behind on 23 minutes when Ndidi swept home Lookman’s pullback via the boot of Jakob Ankersen.

By then Dewsbury-Hall, Barnes and Daka had all wasted good openings, and Carlgren was forced into action once more when Tielemans brilliantly found Dewsbury-Hall only for his shot to be kept out by the outstretched right boot of the Randers goalkeeper.

Leicester were seeking their first clean sheet in Europe this season – and first in seven games in all competitions – but they were pegged back right on the stroke of half-time.

Daniel Amartey was unable to head home the rebound after Caglar Soyuncu’s shot was saved, and Randers took full advantage of the reprieve as Marc Albrighton’s slip allowed Tosin Kehinde to make progress down the right and his low cross was tucked in first time by Hammershoy-Mistrati.

Leicester had 13 shots in the opening period to Randers’ two, but within nine minutes of the second half the hosts had established a two-goal lead.

Barnes showed fine composure to slot home after Carlgren had denied Lookman and Randers were still gathering themselves when Leicester were celebrating a contentious third.

Daka looked like he was in an offside position as he tapped into an empty net following Tielemans’ parried shot.

By now it was damage limitation for Randers but their evening was compounded when Simon Piesinger was beaten too easily by Lookman down the right and his low ball was swept into the net by the impressive Dewsbury-Hall.

Rodgers added: “We are disappointed with the goal we conceded right on half-time but I think we continued right on from our game with West Ham. Our mantra, in terms of being positive with the ball and progressive.

“I thought we started well in the first half and created numbers of opportunities in the first and second half. Their keeper has made some fantastic saves. But I am delighted. It is obviously only the first game but to get the four goals and create so much was very encouraging.”

Maddison forced off after falling unopposed

This may have looked like a worthless fixture but it could well prove to be a very significant moment and a launchpad for Leicester heading into the rest of the season.

They had not won since beating Watford in the FA Cup in early January. Five games without a win with 12 goals conceded in the process was not good enough for Rodgers, even leading to speculation surrounding his future. The hope is that this competition will allow them to play themselves back into form.

The moment that will concern Leicester supporters came in the 80th minute. Maddison had been a 64th-minute substitute and his only involvement of significance was a free-kick after he was fouled by Lasse Johnsen.

There was nothing in the incident to suggest a hefty collision would lead to the concerning scenes as he was assisted back onto his feet by two members of Leicester’s medical team following routine checks on the field of play.

Soyuncu was also withdrawn in stoppage time after an awkward landing and will be assessed. Another injury is the last thing Rodgers needs, but this was a morale-boosting win.

The Leicester boss added: “Our goal for the remainder of the season is to finish as high as we can in the league, to keep developing, improving and to get players back. We want to finish as strong as we can and bring that into the following season. In this competition, everyone is in it to win it and we are no different.”

Having faded following strong starts in recent seasons, Rodgers will be hoping this sparks a reverse trend both domestically and in Europe this time around.

Man of the match: Kiernan Dewsbury-Hall

“I thought we were dominant throughout the game. We showed a professional performance tonight. We concede late at the weekend and we wanted to show more professionalism in this game and I thought we controlled the game and should have scored more goals.

“I had a couple of chances in the first half and to be fair to the keeper, he has made a couple of good saves. I thought it would be one of those nights. But I stuck at it and I’m thankful I got one in the end.

“I am loving it. I am a kid playing for his boyhood club. It is a dream come true. Every minute I spend on the pitch I will give the best I can because I am proud to play for this club. I know the results will come and it is exciting times ahead.

“We wanted to give the crowd something to be happy about. We got the win and they can go home happy. We know this is a great opportunity to secure European football again. We go into this tournament pushing ourselves as hard as we can to win it.”