Home Sport Fred on his critics, ‘fake news’ and new role under Rangnick 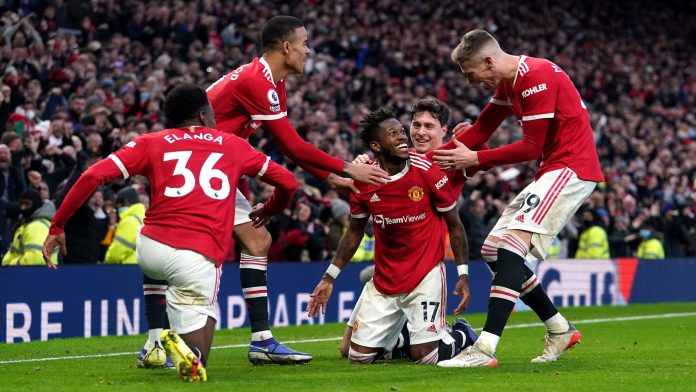 Fred holds two thumbs up to the camera and grins. We are not even past the introductions stage of our interview but already the Brazilian’s infectious personality is shining through.

Fred is a popular figure around Carrington, from where he is speaking to Sky Sports over Zoom. Popular with his team-mates, who mobbed him in jubilant celebration following his winning goal against Crystal Palace in December. Popular with his coaches too.

Jose Mourinho talked up his “positive influence” in the dressing room. Ole Gunnar Solskjaer lauded his “exceptional” character. Ralf Rangnick, meanwhile, saw the same qualities within days of his arrival. “I think everybody loves Fred,” he said. “He’s a sunshine.”

He has not always enjoyed the same popularity among fans. In fact, few players have taken more flak. But Fred can play a bit too and that’s never been clearer than in the last few months.

The 28-year-old, back in the Brazil fold – and indeed team – after a lengthy international hiatus, has been one of United’s best performers under Rangnick.

There were signs of rustiness on his return to the side against Brighton on Tuesday following a bout of Covid – “I wasn’t able to train and I felt it during the game,” he tells Sky Sports – but it said a lot that he was brought straight back in at Paul Pogba’s expense.

It says a lot, too, that Manchester United have a win rate of 59 per cent with him in the side this season compared to just 25 per cent without him. They are also unbeaten in his last 11 starts.

“I believe I’ve got a lot to add to the team,” he says, smiling, as ever. “We have a lot of quality players in midfield but also different types of players who can complement each other.

“Whoever is on the field always does their best and the most important thing is that we start winning games and winning trophies. We’re still in with a shout in the Champions League and we need to be in the best position possible in the Premier League.”

Fred is likely to play a significant role on both fronts, his importance to the side enhanced by a change of position since Solskjaer’s departure in November. A player previously found at the base of United’s midfield is now impressing further forward.

“I really like playing there,” he says. “With the Seleção, I play in a position which is closer to the opposition goal and the coach here has changed my positioning too and I really like it.”

Fred is now better able to influence proceedings in the final third, allowing him to contribute as many goals and assists in his last 10 Premier League appearances (four) as in his previous 85.

His stunning winner against Palace, struck with his weaker foot from the edge of the box, is the standout example of his previously untapped attacking capabilities but there have been others.

There was the superb diagonal cross to set up Scott McTominay’s goal against Aston Villa in the FA Cup; the cute reverse pass over the top to create Anthony Elanga’s opener against Brentford.

Fred is clearly enjoying the change but he is happy to do whatever the team requires and even now his defensive influence endures. No United player has made more tackles or recoveries this season. He also ranks top in terms of possession won in the middle third.

“I have no problem playing deeper and I enjoy that position too,” he says. “I just want to be able to help the team as much as possible – that’s my priority. I have a big desire to help the team.”

And the manager. Fred describes Rangnick as a “top coach who has arrived at the club to help us”, adding: “Ralf just wants me to do my best. He knows the energy I have but also the quality I have.

“Obviously, he has a different way of working from the previous manager, but we have to adapt to that. We have to start again. That’s not easy, but we need to give everything we have in training.

“We have had good results and not-so-good results in the last few games but we’re really happy with the win against Brighton and we now need to keep improving. We’ve got an intense month with a lot of important games, so we need to continue giving our best.”

Fred has done just that throughout his time at United but it has not been without its challenges. There was a difficult season of adaptation following his arrival from Shakhtar Donetsk in 2018 and his form fluctuated in the subsequent campaigns.

“It was very difficult but I learned from it,” he says. “It was a learning experience. Thanks to God I got through it. I’m really happy with my performances now but I think I’ve been playing well for quite a while.

FREE TO WATCH: Highlights from Manchester United’s win against Brighton

“I just put my head down and quietly worked really hard, but I also had the help of my team-mates and the help of my family. That’s what’s important and it helped me get through that period. I feel I’m doing really well here now. I’m happy and I’m at 100 per cent.”

Fred has had to show formidable resolve in the face of heavy criticism along the way. The key, he says, is to know when to unplug from social media – “anyone can open up an account to send you offensive messages and that’s really saddening,” he says – and to try to use criticism as a source of motivation.

“Absolutely,” he says. “There are people who can say things, people in the media, and people who talk about subjects they don’t really understand, so you have to prove them wrong.

“But motivation doesn’t just come from others. For me, it was more about doing it for myself. I already know when I can better, so I just needed to stay focused. I grew, I learned a lot and that’s what has got me where I am today, doing very well here. Now I can get with things calmly and do my work in a relaxed way.”

Still, though, he sees outsiders trying to undermine him and his team-mates. This week, Marcus Rashford spoke out against claims of a split in the dressing room. Last month, Fred felt compelled to deny a report he was seeking an exit from the club.

“As I said before, a lot of people say a lot of things and at times people believe fake news,” he says. “It wasn’t the first time that fake things had been said about me.

“We had been going through a difficult period at the club at the time and these rumours came out about me wanting to leave and being unhappy. They were untrue, so I felt it was time to speak up.

“I needed to tell the fans I was 100 per cent committed to the club and that I had no intention of leaving. It was the right time to speak, I think. I don’t like talking much on social media but on that occasion I felt I had to show the fans my desire to stay at the club.”

Fred is similarly emphatic on the claims of a split among the players addressed by Rashford.

“Our dressing room is really good,” he says. “There’s a lot of fake news and a lot of rumours surrounding it but it’s great. We work together and we all have the same goals and objectives.

“It’s not easy for the manager to keep everyone happy because everyone wants to play and we have so many good players. But we understand each other. We have developed harmony in the dressing room and I think that’s the most important thing we have.

“We have maximum respect for each other in the dressing room.”

How does he see his role within it?

“I think it’s important to bring some joy to the dressing room,” he says. “Some players can get frustrated or annoyed sometimes so I try to create a positive atmosphere and make things lively, whether that’s by putting on music or whatever else.

“I always try to bring happiness and good energy.”