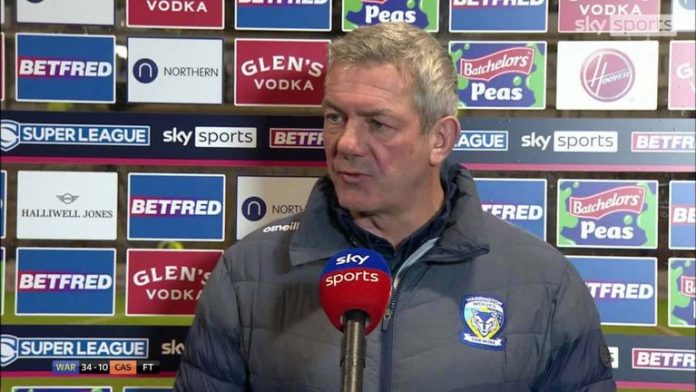 Daryl Powell’s first home match in charge of Warrington saw him celebrate a victory over former club Castleford; Tigers head coach Lee Radford was pleased with some aspects of his side’s display, but frustrated with the penalties they conceded

Daryl Powell hailed a “pivotal” win as he marked his first home game as Warrington Wolves head coach with an emphatic 34-10 victory over his old club Castleford Tigers.

But they were in rampant form against the Tigers on Thursday evening running in six tries, two of them from winger Josh Charnley on his 100th appearance for the club.

“I wouldn’t have wanted to lose that game,” said Powell, who spent over eight seasons with the Tigers. “Obviously I have a lot of regard for Castleford.

“I saw it as a pivotal game for us. We didn’t play that well last week and it was important we played well tonight. I thought we were much better. We started a bit slow defensively but grew into the game and played some smart rugby league.

“Rob Mulhern was fantastic with his line speed, but all the pack were great and the halves were really inventive and grew into the game.

“Our defence was really strong, we shut down their key threats. It was an outstanding performance tonight. The boys have done an awesome job.”

The result leaves Powell’s successor Lee Radford still looking for his first win as Tigers head coach following an opening-round home defeat by Salford Red Devils, but he felt his side’s performance was a significant improvement.

“I’ve not missed this feeling, a horrible, horrible feeling,” said Radford, who spent nearly two years out of the game following his sacking by Hull FC. “I would rather have played terrible and had two wins, but I thought today was a response to last week when we were flat.

“I was over the moon with how we started. I thought our intent and our line speed was fantastic and I was hoping from that arm wrestle we’d get our rewards at the back end of the game.

“Unfortunately, when you lose the penalty count 10-4 and have one reset to three, it comes back to bite you and we ran out of gas with the amount of defending we did.

“If we turn up with the same intent, hopefully we can get that for longer next week and, if we can shed a few of those penalties, we will give ourselves a good shout.”

Already without scrum-half Danny Richardson, who suffered a fracture to his neck against Salford, Castleford lost both second rowers Kenny Edwards and Alex Sutcliffe with calf and throat injuries respectively.

Powell added England prop Mike Cooper missed the game for Warrington through illness, while centre Connor Wrench is due to have scans after hurting his back in training.