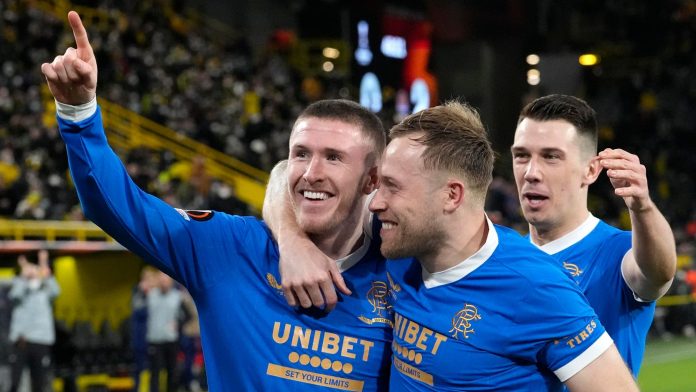 Watch out, Europe – Rangers are here

Rangers’ victory at Borussia Dortmund on Thursday will go down as one of the greatest in their history. But in the more immediate future, Giovanni van Bronckhorst’s side showed they are a team to be feared in the Europa League.

Dortmund were among the favourites to win the competition overall, but faced a rather unknown entity in Rangers – that is to say, the two sides had not played each other in European competition in 22 years.

But the German side – currently second in the Bundesliga – never really turned up in what was the 1,000th game at the Westfalendstadion, but Rangers were never overawed by the occasion, location or opponent.

They pressed Dortmund from the first minute and some poor defensive errors from the hosts allowed Rangers to surge into a lead. Dan-Axel Zagadou handled the ball for the opening penalty and turned the ball into his own net for Rangers’ fourth.

Rangers manager Giovanni van Bronckhorst says he is happy with his side’s 4-2 win against a quality Borussia Dortmund team but is aware the tie is not over.

Dortmund’s marking was practically non-existent on Alfredo Morelos as he easily turned home the second goal and John Lundstram produced a moment of quality for his strike just after the break.

Rangers thoroughly deserved the victory too. They were better drilled, hungrier for the victory and despite the plethora of stars littered throughout Dortmund’s squad, certainly had the better players on the night.

But a late goal from Raphael Guerreiro to make it 4-2 does set up an enthralling second leg at Ibrox next Thursday. With away goals abolished, Dortmund will need to score two to draw level and three to take the lead. They are expected to have talismanic striker Erling Haaland back in the squad too – an entirely different and threatening prospect for Rangers.

But the Ibrox crowd turn up as the 12th, 13th and even 14th man when their team needs them and with a sold-out arena, you would back Rangers to be able to see the tie through, knocking out a European giant in one of their greatest achievements in continental competitions.

It will be a result that will make other teams around Europe sit up and take notice at Rangers. They will not be scared of any potential future opponent and here’s hoping a dream run to the latter stages of the Europa League is on the cards.
Charlotte Marsh

This may have looked like a worthless fixture but it could well prove to be a very significant moment and a launchpad for Leicester heading into the rest of the season. Leicester hadn’t won since beating Watford in the FA Cup in early January. They will hope this competition will mean they can play themselves back into form.

Five games without a win with 12 goals conceded in the process was not good enough for Brendan Rodgers, even leading to speculation surrounding his future.

Leicester are back on track and while a clean sheet eluded them once again on Thursday night, they could well have notched up a cricket score were it not for the brilliance of Patrik Carlgren in the Randers goal.

Leicester City manager Brendan Rodgers says he is happy with the performance against Randers and feels his team dominated the game.

The hosts’ attempts to add to their lead included shots from Harvey Barnes, Kiernan Dewsbury-Hall and Caglar Soyuncu while Daniel Amartey produced a remarkable miss after the Soyuncu effort was parried, heading wide from close-range when looking certain to score.

With Wolves in the Premier League at Molineux on Sunday – live on Sky Sports – sandwiched in between this tie, it was vital that Leicester gave a rousing second-half response to conceding right on the stroke of half-time.

“Their goal was a reminder that is you make any mistakes, no matter how dominant you are, you can be punished,” Brendan Rodgers said. “Teams at this level can hurt you. It was about keeping calm and keeping our football flowing, creating and taking chances.

“We should have won against West Ham, I felt. And in some other games we have had draws when we should have won. This group will get back to its level, it is just time and players coming back. The fluency was good, We looked dynamic.

“Our goal for the remainder of the season is to finish as high as we can in the league, to keep developing, improving and to get players back. We want to finish as strong as we can and bring that into the following season. In this competition, everyone is in it to win it and we are no different.”

Having faded following strong starts in recent seasons, Rodgers will be hoping this sparks the reverse trend this time around.
Ben Grounds

Celtic brought back down to earth

Celtic headed into Thursday night’s Europa Conference knockout first-leg play-off tie in rude health, on top of the Scottish Premiership on the back of a magnificent 17-game unbeaten run that had their fans confident of getting past Bodo/Glimt.

For one thing, the Norwegians had not played since retaining their title on December 12, meaning surely they would be suffering from a bit of ring rust at what was a bouncing Parkhead ahead of kick-off.

Not only that, but Ange Postecoglou’s in-form side had also brushed aside champions Rangers at home at the start of February, but that is not how it played out in Glasgow as the hosts were given the run around by opponents who had, do not forget, humiliated Jose Mourinho’s Roma team 6-1 earlier in the competition.

You can see why on the basis of this classy display, with the visitors thoroughly deserving their 3-1 lead heading into the return leg a week on Thursday in what now looks like mission impossible for Celtic.
Richard Morgan