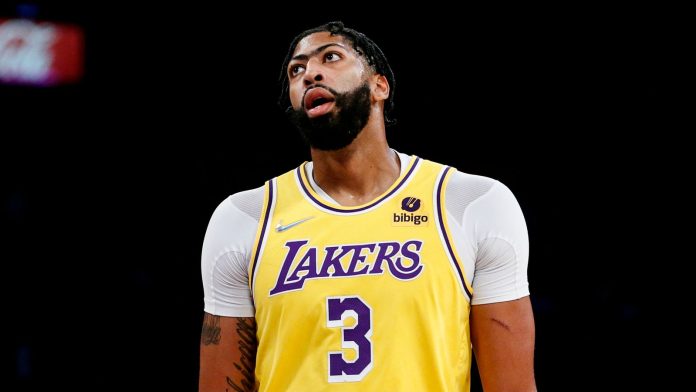 Anthony Davis’ injury woes continued Wednesday against the Jazz as the Lakers star suffered what appeared to be a significant ankle injury late in the second quarter of Wednesday night’s 106-101 win.

Initial X-rays were negative, and the Lakers announced on Thursday that Davis had suffered a mid-foot sprain and would be re-evaluated in four weeks. The ninth-place Lakers play 11 of their remaining 24 games in that span, including key meetings with other Play-In Tournament hopefuls such as the Clippers (twice), Pelicans and Spurs.

Davis went up to catch a lob pass and came down on Jazz center Rudy Gobert’s heel with three minutes remaining in the first half. Davis was unable to put any weight on his right foot and had to be helped off the court by teammates DeAndre Jordan and Dwight Howard into the locker room.

Davis, who scored 17 points in 17 minutes before he was injured, had only recently returned after missing 17 games with a sprained knee.

“He was shaking his head about everything. He was frustrated because it looks like he is going to miss some time,” said Vogel, who saw Davis in the locker room during halftime.

Even with Wednesday’s appearance, the eight-time All-Star has missed 57 of the Lakers’ 130 games over the past two seasons.

Wednesday also marked only the sixth time since December 15 that Davis and LeBron James had been in the starting lineup together.

“It was sickening to see AD go down in that fashion. It was an unfortunate play,” James said. “The good thing is he will be better a week from today when we all come back. He’ll be back as soon as he can. Nothing to rush.”

It is another bad break for the Lakers. Despite beating Utah to snap a three-game losing streak, Los Angeles (27-31) goes into the break in ninth place in the Western Conference. The Lakers are six games behind Denver for the sixth seed, which would help them avoid having to participate in the Play-In Tournament for the second straight season.

“We have to win as many games as we can and believe in who we have,” Vogel said. “We have a deep team. Certain guys may be in and out of the rotation but everyone is going to be needed.”