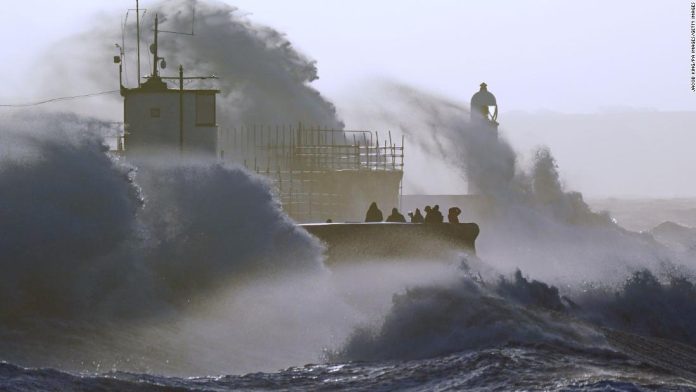 The UK Met Office expanded its rare “danger-to-life” weather alert on Friday morning to include most of the south of England and some of Wales, before Eunice picked up speed with winds as high as 122 miles per hours (mph), the fastest on record in England. High wind speeds is what make wind storms intense.
A CNN reporter witnessed a rooftop flying off a home in the southwestern London area of Surbiton. The roof crushed a car parked on the street.
Social media video showed a building housing lifeboats with part of its rooftop blown off at Sennen beach in the country of Cornwall, where strong winds were pushing waves above a seawall. Police in Cornwall and neighboring Devon said they had received high volumes of calls about flying debris, collapsed roofs and fallen trees.
Residents also posted images on social media of collapsed fences and trees in roads.
As dozens of flights were canceled across London’s major airports, more than 200,000 people tuned in to watch a live stream on YouTube of planes landing at London’s Heathrow. The aircraft were seen battling strong gusts as they came into land, some of them wobbling mid-air, others skidding from side to side once they hit the runway.
The video, on the Big Jet TV channel, was accompanied by comical commentary by presenter Jerry Dyer, who kept viewers entertained by offering words of encouragement to the pilots, at one point saying: “Come on mate, you can do it!”
British Airways said it was grounding a number of planes and expected “significant disruption,” but that most flights would go ahead as planned.
“Safety is our number one priority, and we’re canceling a number of flights,” British Airways said in a statement.
The airline said it was looking at deploying larger aircraft where possible to better withstand the weather.
Rail companies have urged customers to reconsider their plans, with blanket speed restrictions in place for most lines across the country.
In a statement Friday, Network Rail warned of high winds blowing trees and other debris onto railway lines, which then block trains and cause delays and cancelations.
Authorities are expecting gusts to cause travel delays, power cuts and possible mobile phone coverage outages throughout Friday.

A sting jet could hit

Meteorologists have also raised the possibility of a sting jet, the weather phenomenon which made the 1987 Great Storm so destructive and deadly. Eighteen people were killed in that storm and 15 million trees were blown down in winds that topped 100 mph.
A sting jet is a very narrow and concentrated blast of powerful, upper-level winds that can form inside powerful weather systems. It descends to the the Earth’s surface and can last a few hours, potentially causing damage to life and property, according to CNN meteorologist Derek Van Dam.
“The ‘sting’ refers to the cloud formation it creates, which resembles a scorpion’s stinger,” he said.
Eunice is the second storm in a week for the UK after Storm Dudley battered parts of Scotland, northern England and Northern Ireland Wednesday, leaving thousands of homes without power. Those homes have since been reconnected.
Hannah Cloke, professor of Hydrology at Britain’s University of Reading, urged people to stay home where possible.
She said people should not to take the red alert “lightly,” as the winds were likely to uproot trees and roof tiles.
“If you’re hit by one of those you will be seriously hurt or killed. Wind that strong will sweep people and vehicles off streets, and topple electricity lines,” she said.

There is little to suggest any link between human-made climate change and the frequency and intensity — or windspeeds — of storms in northern Europe at current levels of global warming.
But damage from windstorms are still getting worse because the rainfall associated with them is becoming more intense, a trend that many scientific studies do link to climate change. Sea level rise also plays a role.
“With more intense rainfall and higher sea levels as human-caused climate change continues to heat the planet, flooding from coastal storm surges and prolonged deluges will worse still further when these rare, explosive storms hit us in a warmer world,” Richard Allan, a climate scientists at the University of Reading, said in a statement.
The Intergovernmental Panel on Climate Change warns that if global temperatures rise by 2 degrees Celsius, compared with levels before industrialization, then northern Europe would start to see an increase in the frequency of severe windstorms.
Temperature rise is currently at around 1.1 degrees Celsius, according to conservative estimates. The world is on track for warming well above 2C, according to an analysis, which looked at governments’ plans to cut greenhouse gas emissions at the COP26 climate talks last year.