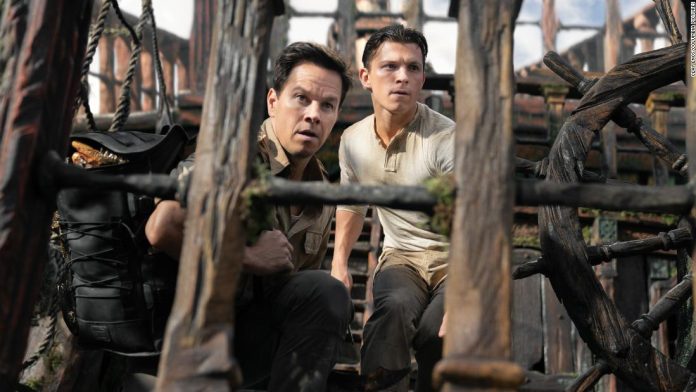 Clearly recognizing its best sequence, the film begins with Holland’s Nathan Drake hanging on for dear life tethered to the floating cargo of an airborne plane, providing an adrenaline rush before flashing back to explain how and why he got there.
The “why” is beyond basic, with Nathan enlisted by fortune hunter Victor “Sully” Sullivan (Mark Wahlberg) to assist him in pursuing billions in gold legendarily hidden by Ferdinand Magellan 500 years ago.
Describing the centuries-old bounty as “the biggest treasure that’s never been found,” Sully thinks the lad can help because he might possess knowledge provided by his long-lost brother, although Nathan proves himself both knowledgeable about the lore and handy in a pinch.
The frequent pinches come thanks to rival seekers of the gold, among them the wealthy heir Santiago Moncada (Antonio Banderas), his henchwoman Braddock (“You’s” Tati Gabrielle) and Sully’s grudging partner Chloe (“Grey’s Anatomy’s” Sophia Ali), who shares his every-person-for-themselves mentality.
Directed by Ruben Fleischer (“Venom” and “Zombieland”), “Uncharted” drops toward the wrong end of the chart every time Holland and Wahlberg engage in juvenile bickering, which alas is all too often. The one strange thing is that the funniest insult they exchange appears in the trailer but not the actual movie, and any good dialogue here is too rare to wind up on the cutting-room floor.
Those shortcomings merely underscore the video-game roots, leaving trifles like adding a third dimension to the characters as unnecessary distractions. While the action scenes proves kinetic and occasionally visceral, the cerebral aspects of deciphering where X marks the spot mostly amount to tedious time-killing between them.
That leaves behind what’s at best a B movie with A-level stunts, similar to the playfulness of Netflix’s recent heist caper “Red Notice,” without the same abundance of superhero star power in its quiver.
For all that, Holland remains innately likable, and after his dark, non-super forays in “Cherry” and “The Devil All the Time,” provides the primary anchor to an unpretentious film that seemingly harbors both champagne wishes and sequel dreams.
Stranger things have happened, but if “Uncharted” had truly wanted to chart a franchise course, its cartographers should have begun by mapping out a stronger game plan.
“Uncharted” premieres in US theaters on Feb. 18. It’s rated PG-13.