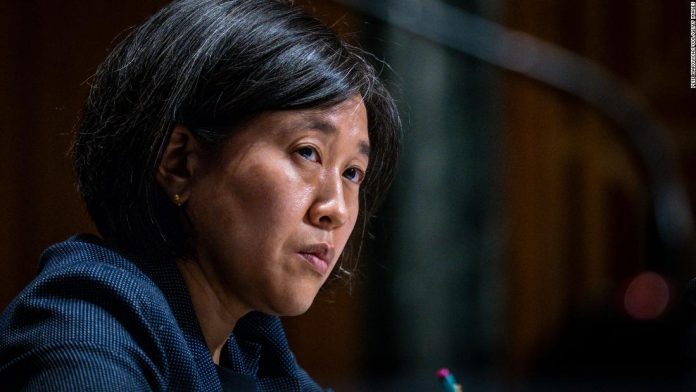 In an announcement on Thursday, the Office of the United States Trade Representative (USTR) said that it had designated for the first time AliExpress, an online marketplace run by Alibaba, and WeChat, Tencent’s ubiquitous mobile app, as “markets that reportedly facilitate substantial trademark counterfeiting.”
The annual list includes 77 entities that are alleged to be engaged in “counterfeiting or copyright piracy,” spanning over a dozen countries.
But in its statement, the USTR pointed specifically to Chinese firms, noting that several other popular platforms from China “continue to be listed,” such as Taobao, another well-known online shopping portal run by Alibaba (BABA), and Pinduoduo (PDD), the e-commerce upstart that allows people to save money when they enlist friends to buy the same item.
Baidu Wangpan, a cloud storage service owned by Chinese search giant Baidu (BIDU), is also accused of allowing copyright infringers to “widely share links to pirated movies, TV shows, and books,” according to the USTR’s report.
In a statement Friday, Tencent (TCEHY) said that “we strongly disagree with the decision made by the United States Trade Representative and are committed to working collaboratively to resolve this matter.”
The protection of intellectual property “is central to our business,” the company continued, adding that it takes measures to clamp down on violations across its platforms “including education, enforcement and close collaboration with rights holders, government agencies and law enforcement.”
Alibaba and Baidu did not immediately respond to a request for comment.
In its 56-page report, the USTR claimed that “China continues to be the number one source of counterfeit products in the world.”
“Counterfeit and pirated goods from China, together with [transferred] goods from China to Hong Kong, accounted for 83% of the value” of such items seized by US customs and border agents in 2020, according to the trade agency.
The Chinese Ministry of Commerce did not immediately respond to a request for comment.
But at a press briefing on Friday, the Chinese Foreign Ministry hit back at Washington.
“China has always attached great importance to [intellectual property] protection and its achievements in recent years are there for all to see,” said Wang Wenbin, a ministry spokesperson, adding that the country had been steadily increasing the number of patents it issued to US entities.
“The rapid growth of foreign patents in China shows that foreign enterprises have firm confidence in China’s patent protection and business environment,” he told reporters.
“We urge the US side to stop politicizing economic and trade issues.”
“The global trade in counterfeit and pirated goods undermines critical US innovation and creativity and harms American workers,” USTR Ambassador Katherine Tai said in a statement on Thursday.
“This illicit trade also increases the vulnerability of workers involved in the manufacturing of counterfeit goods to exploitative labor practices, and the counterfeit goods can pose significant risks to the health and safety of consumers and workers around the world.”
— CNN’s Beijing bureau contributed to this report.