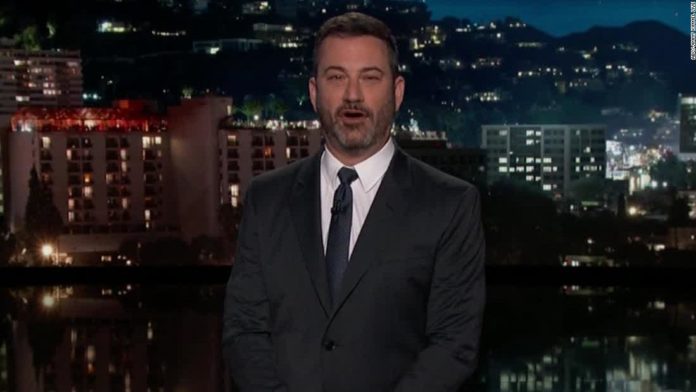 “It’s horrible,” Kimmel told reporters on Monday of the tragedies. “Nobody’s doing anything about it at all and we seem to forget about these tragedies nationally four days after they happen.”
In recent years, Kimmel has not shied away from tackling subjects like health care, immigration and gun safety legislation on his late-night show, “Jimmy Kimmel Live!”
“My hope, always, in situations like that, is…I know I don’t have any thoughts that are new or groundbreaking and usually by the time we get on the air there’s been 24 to 48 hours of news coverage, but to just remind people that 97% of Americans believe that we should have background checks for purchases at gun shows and our politicians don’t seem to care what we think anymore,” he said.
Kimmel credited David Letterman and “The Daily Show” host Jon Stewart for being leaders in how to tackle more difficult subjects.
“You watch the news all day, you see what’s going on, how do you walk on stage and ignore it? It just doesn’t work anymore,” Kimmel said. “I wish I could. It’s hard for me to talk about serious subjects. It takes a lot out of me. I do want to be funny. That’s fun. It’s not fun doing anything like that.”
Kimmel said he thinks late-night viewers form connections with hosts and, “maybe more than any other format” turn to them for commentary, the same way they would a friend.
“I think that they want to know what you think in the same way that when you interact with your friends they want to know what they think about things,” he said. “I wish we didn’t have to do it so frequently.”