Home Lifestyle The 15 Best Cookbooks of 2022 Will Have You Cheffing It Up... 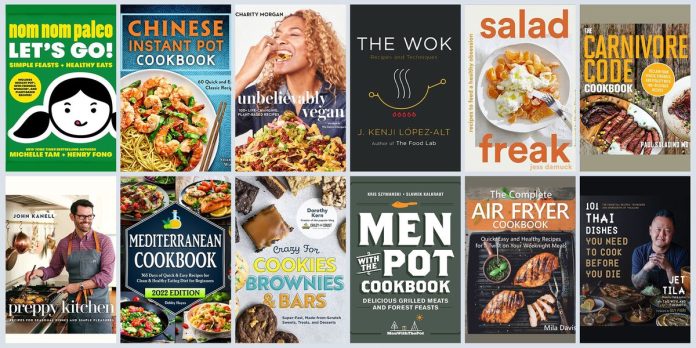 2022 is looking, optimistically, like a year of endlessly dining out—trying to visit the new slate of eateries we loved in 2021. But before you start fighting over reservations, you should also make space on your shelves or bookcase, because 2022 is also looking like a year of whipping up restaurant-level dishes at home from a completely new slate of cookbooks. You see: 2020 was your year of learning to chef it up from YouTube, and 2021 was your year of trial and error. Now is your time to officially serve. That makes much more sense than just eating out all the time.

And the best cookbooks this year will have you salivating—some just from the photography alone. They’ll take you on a voyage from Santorini to Chinatown to Bangkok to the soulful American South. They’ll sit you down at the kitchen tables of some big celebs or food bloggers. And we’re really seeing the uptick in health-oriented recipes—that embrace a variety of styles of eating—that are just as appetizing as comfort foods we know and love. And if you’re enthusiastic about trying out your new wok, pot, pressure cooker, or air fryer, the cookbooks this year will school you in the art of every method.

Anyways, you can’t wait to cook. And below are 15 of the best and most anticipated cookbooks of 2022 to start off strong. We suggest beginning with cooking for yourself on weeknight suppers, then moving on to your weekend family dinner, and then the many holiday feasts in the latter half of the year.

It’s hard to imagine abandoning the indulgence of meat, dairy, or eggs—at least for us, anyway—but the veggie-heavy style of eating is looking more convincing than ever thanks to private chef Charity Morgan who’s managed to ingrain comfort food flavors into plant-based recipes and make a meat-free lifestyle just as succulent. Her recipes will teach you how to substitute chicken with oyster mushrooms, spice walnuts to taste like chorizo for tacos, and smoke up a veggie jambalaya.

This cookbook is written around a visual banquet of step-by-step images, foolproof guides, engaging cartoons, and quirky comedy that’ll have you laughing and drooling at the same time. And you’ll cook up something good, too, like bacon cheeseburger casserole, balsamic beef stew, cream puffs, Cantonese Pipa duck, or chicken karaage. It has recipes inspired by delicacies from all over the world, for all occasions, and even diets like keto, Whole30, or paleo.

Ever since air fryers were delivered to us by the culinary deities, we’ve not missed a meal. Davis’s cookbook focuses on only easy recipes worth getting some hot air blowing. You’ll put your air fryer on repeat for protein platters like crispy honey wings and beef tikka, or everyday relishes like potato patties and cinnamon apples. Since there’s really no rookie vs. veteran in the art of air frying—it’s that convenient—this cookbook is meant for anyone who likes it low-fat and crispy.

The Keto Bible: More Than A Keto Cookbook

Those who go keto do it around the clock: breakfast, lunch, dinner, supper, snacks, etc. This cookbook has stuff for all of those moment. You’ll get a range of beef, lamb, pork, seafood, salads, soups, and recipes that you won’t even believe can be keto-ed, like cakes or ice creams. It’s a super guide to a four-week ketogenic lifestyle with a crash course written in a tell-it-like-it-is language to get you in shape.

101 Thai Dishes You Need to Cook Before You Die

Two culinary masterminds have teamed up to show you a whole new world: canned curry paste. Plus you’ll pour over gorgeous pictures of street-style basil pork, glass noodle stir-fry, hung lay northern pork curry, Thai BBQ chicken, fried tilapia, and more. The choices in their cookbook include both popular classics and unsung dishes in the rich culinary heritage of Thailand. So if you’re looking for a one-stop train to a Thai kitchen, this is your station.

Debby Hayes is a certified nutritionist, and her cookbook provides over 100 recipes to lower your cholesterol level, prevent heart disease, and/or lose weight—basically live longer than 100 years, like the folks in the Mediterranean region blue zones—all while treating your stomach right. It’s broken down into chapters of breakfasts, soups and stews, salads, vegetarian, poultry and seafood, beef, and desserts. Start with a bite of Greek-style chicken couscous or cinnamon glazed halibut fillets. Healthy and tasty.

The Savory Baker: 150 Creative Recipes, from Classic to Modern

Don’t you just want to sink your teeth into the cover? Better yet, don’t you want to make that pie and become a master baker? From everyday biscuits to gourmet bread, the cookbook has a show-stopping collection of savory baking recipes—we’re talking fragrant in spices and herbs, and made with cheeses and meats. Smoked salmon and leek tart, pão de quejo, kimchi pancake, this one has it all.

Do you want to be a cookie master? One who can show up at your in-laws’, partners’, or colleagues’ homes and events with a tray of novel cookies to knock their socks off? You probably do, now that the “Crazy for Crust” baking blogger Dorothy Kern has published a cookbook with a recipe for trail mix oatmeal cookies, cookie fruit tarts, and cookie truffle bites. After all the crunchy chews, it’ll also usher you into the patisserie of brownies, blondies, shortbreads, shortcakes, bars—each as decadent as the next.

On the other end of the spectrum from where this list began, we have animal-based diet. High protein. Nutrient-dense meat and organs from grass-fed animals. (Also, information on what plants or fruits to avoid to best embrace this diet.) The surprisingly healing and appealing attributes of eating like a true carnivore for a healthier body are what you’ll discover in Dr. Paul Saladino’s cookbook. Mains like honey-glazed brisket or Swedish roast beef are palate-pleasers, but twists like carnivore waffles and real meat lover’s pizza will really get you hooked.

In the end, Chinese food always wins. And Chinese dishes adapted for the effortlessness of the Instant Pot for those who fear cooking? Wicked awesome. So long as you have the nifty multicooker in your kitchen counter, you’ll be able to steam, braise, pressure cook, simmer, and stew the inventory in your pantry to soy-braised duck legs or sweet vinegar ribs, or make that ginger and scallion sauce that goes great with any meat.

The Wok: Recipes and Techniques

Chef Kenji changed the way entire swathes of people cook when his best-selling first cookbook The Food Lab dropped in 2015. From it, we learned to approach everyday cuisine with a scientific eye and become Einsteins in the kitchen. Now, he’ll school us the science of cooking in a wok. You’ll get down the basics—stir-fry, deep fry, steam, simmer, or braise—then pass the final exams of Kung Pao chicken, pad Thai, San Francisco-style garlic noodles, or beef chow fun. All in one single versatile pan. Oh, he’ll also teach you how to sharpen your knife skills and stock up your pantry for the best wok dishes. All part of the wok science.

Collard greens with turkey drums, old-fashioned skillet cornbread, chicken meatloaf, chicken-fried chicken with country gravy. These are the names tossed around at many American family functions and—because of their high cholesterol, fat, and salt contents—doctor’s offices. Shanna and Eric Jones, however, will have you digging into healthier versions of these southern classics. Their cookbook will convince you to make small adjustments to recipes of peach cobbler or bourbon apple crisp without compromising on the Cajun charm.

You might not have the luxury of hiring Martha Stewart’s personal salad chef, Jess Damuck, to run your kitchen but you can still eat like the lifestyle icon. In her cookbook, Damuck shows us how to play with plant-forward ingredients: mix that tea-smoked chicken in your breakfast bitter greens; match that crouton and endive with roasted grapes; or fire up your oven for that caesar salad pizza. Once you learn how to enjoy stacking fresh produce, cheese, and something with a kick in a bowl, you’ll never get bored from eating salad again.

If you’ve been on TikTok, you’ve definitely seen a Harrison Ford-lookalike and his buddy roasting the juiciest chicken breast or paella in a forest, with a pot, a sharp knife, and some fire. Now the duo is releasing their first collection of recipes in print to help you turn their viral cooking videos into your kitchen reality, where grilling for meat like tomahawk steak or rustic bakes like cast-iron skillet pizza will join your many backpacking trips and weekend BBQs.

If you’re looking for recipes hearty enough for all-year meals but versatile enough to be paired with a larger menu, social media sensation John Kanell has a cookbook in the bag that’ll ring you in a habit of shopping for ingredients at peak freshness for each season. There, you’ll find fan-favorites like blackberry-balsamic pork chops, as well as staples like tostadas that can be crafted in a shorter time given his insider tricks.

Get Unlimited Access to Esquire’s Food & Drinks Stories, Every Day

Maverick Li Maverick Li is the Assistant eCommerce Editor at Esquire, where he covers tech, home, and all things related to lifestyle.