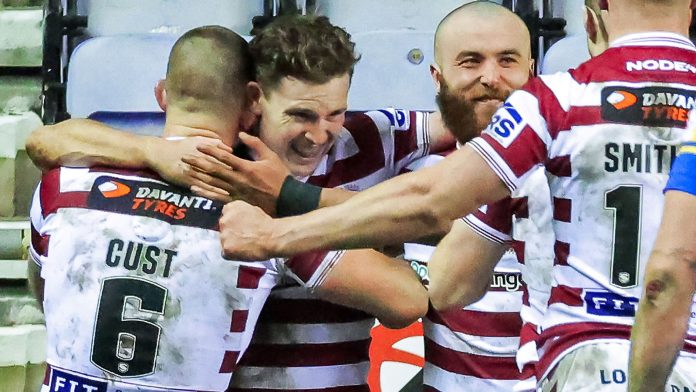 Wigan made it two wins from two in the 2022 Betfred Super League season after seeing off Leeds 34-12 in their first home game of the campaign, but head coach Matt Peet is not getting carried away by early successes

Matt Peet is adamant he will remain grounded after watching Wigan Warriors run in six tries in the 34-12 win over Leeds Rhinos.

Jai Field grabbed a hat-trick of tries, while Sam Powell scored a double with Liam Farrell adding a late one as the Warriors hit back after going behind.

The victory sees Wigan continue their unbeaten start to the 2022 Betfred Super League season, but head coach Peet believes there is still plenty of room for improvement.

“It was pleasing to get the win against a strong Leeds side,” Peet said. “I thought the performance was a positive one. We showed improvements from last week. We had to do it tough defensively at times.

“There is still loads of improvement in us. I think we would have taken a one-point win at the start of the evening. It was nice to post some points.

“I am not getting carried away. I know there are tough times ahead. I am well aware that it’s not going to be plain sailing. I or the group will not be getting ahead of ourselves.

“We will just continue to work hard during the pleasant evenings like tonight and the tough ones. It’s important we stay consistent.”

Leeds coach Richard Agar, on the other hand, admitted his side were poor and deserved everything they got.

The Rhinos trailed 12-6 at half-time, but their performance in the second period was not good enough according to the Leeds chief as they conceded four tries after the break.

“I thought after 20 to 25 minutes, we were going to have a real contest,” Agar said. “We started pretty well. We looked quite threatening with the ball, we weren’t too bad.

“Then when Matt Prior and Zane Tetevano ended their first spell, we lost the tightness in the middle. I felt when we came out of the changing room at half time, I didn’t really feel much reaction from them at half time to say it was a 12-6 ball game.