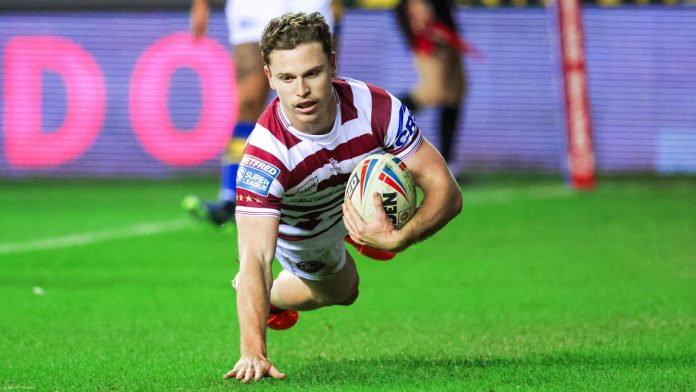 Full-back Jai Field grabbed three tries, including a spectacular length-of-the-field effort, to help Wigan to victory over Leeds in their first home game of the season; Sam Powell (2) and Liam Farrell also crossed for the Warriors

The first hat-trick of Jai Field’s professional rugby league career helped Wigan Warriors make it two wins from two in the Betfred Super League as they saw off Leeds Rhinos 34-12 in Friday’s match.

Debutant Blake Austin’s converted try had the Rhinos ahead after 11 minutes, but full-back Field scored and converted two of his own to turn the tables as the sides returned to the changing rooms with the Warriors leading 12-6 at half-time at the DW Stadium.

Field completed his treble with a stunning solo try six minutes after the restart, which was sandwiched by two from Sam Powell, with Liam Farrell chipping in with one as well to ensure Matt Peet’s unbeaten start to life as Wigan head coach continued.

🤩 A classy performance from the Warriors to make it two from two in @SuperLeague!#WWRL #SLWIGLEE pic.twitter.com/Ob8GX6aTo9

Meanwhile, a miserable night for the Rhinos – who managed a second-half consolation try through Matt Prior – was compounded by Ash Handley and Cameron Smith being forced off due to injuries, and Liam Tindall being sent to the sin-bin late on.

An error from Kai Pearce-Paul put the Warriors under pressure deep in their own half early on. Alex Mellor went close before Liam Marshall put a monster hit on Tindall, but he was penalised for offside to keep the Yorkshire side camped on their line.

They took full advantage of their possession as Austin collected a pass from half-back partner Aiden Sezer to step his way past some poor defending to grab a try on debut, with Sezer converting too.

The Rhinos looked like they were going to extend their lead as Tindall made a break from his own 20 and seemed to be racing away to score, but Field showed his defensive qualities too by keeping his composure and putting in a fine tackle that sent the winger into touch.

Zak Hardaker started on the wing for Wigan, with Jake Bibby moving to centre in the absence of the injured Iain Thornley. Oliver Partington also came into the team on the interchange bench.

Blake Austin made his debut in the halves for Leeds, while Liam Tindall, Alex Mellor and Morgan Gannon all came into the starting XIII as well. James Bentley and Brad Dwyer were both suspended.

That lifted the home support and they finally had something to cheer about – albeit in controversial circumstances. Cade Cust tried to find Jake Bibby with a short ball and it looked the centre had knocked on before Field picked up the loose ball to score, with video referee Ben Thaler adjudicating the ball had come off Bibby’s foot.

Wigan ended the half the stronger with Zak Hardaker going close down the right before the Warriors then sent a dagger through the hearts of the Rhinos fans with a try out of nothing as John Bateman managed to slip the ball out and Field danced his way through without a finger laid on him for his second try.

The first try after the break would be crucial and it went to the Warriors as they kept the ball alive on the last tackle, with Pearce-Paul eventually sliding through a perfectly-weighted grubber for hooker Powell to chase down and score from – again though, only after confirmation from the video referee.

The hosts then put the game to bed straight from the restart as a rampaging Patrick Mago got the ball away in the tackle and Field was on hand to race 80 metres and leave the Leeds cover defence for dead to complete his hat-trick. Hardaker’s conversion made it 24-6 and the Warriors were in full control.

Wigan then made it three tries in 10 second-half minutes in a very bizarre incident. It looked like Jack Walker had grounded the ball in goal to concede a goal-line drop-out, but referee Liam Moore felt he had dropped the ball and sent the decision upstairs. TV replays subsequently showed that Walker dropped the ball and Powell grounded it for his second of the night.

Leeds managed to pull one back through Prior, but Wigan had the final say as Farrell touched down from a yard out following great work from Cust.

“I thought Leeds challenged us early on, which we expected. I didn’t like the way we started the game, but once we settled into it, I thought we showed signs of what we were capable of. We’ve got lots to learn, but overall, we’ve got to be pleased.

“If we keep improving then I expect us to be challenging for the big games – I think that’s the plan at clubs like this. We know we’ve got a lot to do yet before we’re at that level, but we didn’t face the best of Leeds this evening with the players they had missing. We won’t be getting carried away, we can only deal with what’s in front of us.”

“I thought for the first 20 to 25 minutes we were going to have a real contest on our hands. I was quite happy with the way we were going.

“We sensed a little bit at half-time that we weren’t getting much response and I thought we’d duly oblige in the opening 20 minutes of the second half. But defensively we were so far off the mark, lacking in line-speed, lacking in contacts and hits, and it was a really poor, flat defensive performance.”

Wigan are back at home next Friday as they aim to make it three wins from three when they host Huddersfield Giants (8pm kick-off).

Leeds will be on Sky Sports again on the same night when they welcome last year’s Grand Final runners-up Catalans Dragons to Headingley (8pm).