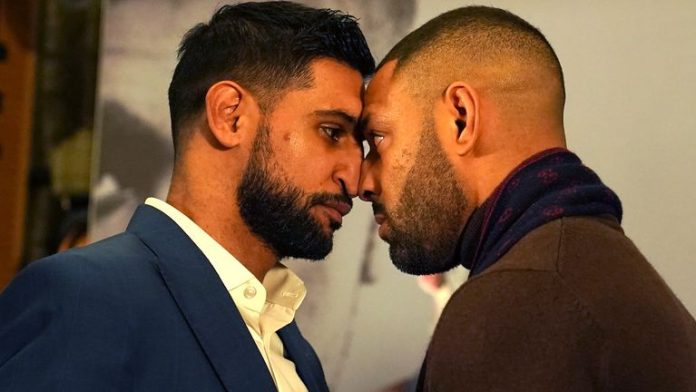 Ahead of Amir Khan and Kell Brook’s long-awaited meeting on Saturday night, a panel of boxing experts have given Sky Sports News their predictions for the main event.

Khan and Brook will finally settle their feud inside the ring in Manchester at the AO Arena on Saturday, live on Sky Sports Box Office.

The pair both impressed at Wednesday’s open workout, before making weight on Friday, with tempers flaring as the fighters came face to face for the final time before they meet in the ring.

Reflexes and sharpness will not be what they once were, that’s a fact. But I think that’s going to make for a better fight, because people are more vulnerable, they are not quite as sharp and it’s easier to have a fight. I think this could end up being a bit of a ding-dong and there will be shots landed.

In a fight like that, generally the guy who has got the better chin and the bigger punches. I think Kell ticks both those boxes. So I would probably lean to Brook.

I’m just leaning towards Amir, but I thought Kell looked fantastic at the weigh-in. I could get it badly wrong, (my prediction) is with no confidence whatsoever.

I do not believe this fight is going the distance. I am sitting on the fence if I say Kell before six, Amir after, but that is what I think.

I am going for Khan, he’s in my stable now, he’s a team-mate, he’s a good friend of mine and I believe he will win.

Years ago you would have had to slow it down to watch it. Now they will take one or two more shots in sparring. They will hit each other now than they would have two years ago.

I am going for Brook – the Sheffield in me wants Brook even though I am a massive fan of Khan. Brook has the timing and the strength. People say his mindset does not look right? When it’s against someone that you don’t like, he will do anything to win.

I see more ways of Amir winning than I do Kell, but in boxing it only takes one shot and Kell definitely has got that shot.

I have always said 7-10 Brook, so I am going to stick with that.

I’m Team Khan. It’s more me just being more a supporter of Khan than Brook. It’s not even any technical thing or skill or anything like that, I am just more a fan of Khan, that’s all it is.

It’s a 50-50 fight, the best man will win. I reckon Khan wins on points, may take a few shots here and there, may get wobbled, but makes it through and wins on points.

I can genuinely see anything happening in this fight. Khan’s supposed to be chinny, Kell’s supposed to be the puncher, so you would say that Kell’s the one that’s going to the knockout if anyone.

But, with the lay-off and the stages of their careers they are at, it would not surprise me if Khan came out and in a flurry does Kell. But I am going to stick my neck out and say Brook stoppage, and I think it’s going to be between rounds three and five.

I think if Amir Khan can get through the first four or five rounds, I think he wins the fight. I keep changing my mind all the time, but if Kell Brook lands, then Kell Brook will take him out, but I just think Brook’s timing has been off, he has not shown himself in a while.

Khan has always had that air of vulnerability but he is always busy, even against Canelo and people like that he was winning rounds because he’s so busy, so if Kell cannot find the shot he will get out-pointed.

Both believe they can win the fight. It’s exciting. It has that feel to it that we have not seen since David Haye vs Tony Bellew, where you cannot miss this. You have got to go home and watch this.

I think it’s a matter of, should it go the distance, who’s going to be more fit when we get into the later rounds.

They are both known for being in great shape, Khan is a master-boxer, Kell – an excellent boxer with better power. So it’s just something we have got to wait and see and that’s why we have high expectations for it.