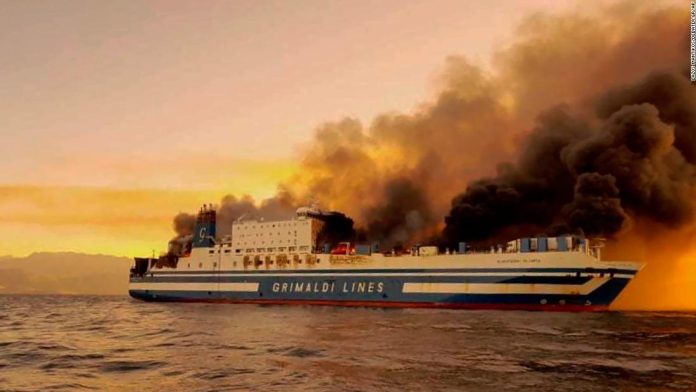 Plumes of smoke were still pouring out of the Italian-flagged Euroferry Olympia, footage on Greek state TV showed.
A total of 241 passengers and 51 crew were on board the when the blaze broke out on Friday, and rescue vessels have already moved most of them to the island of Corfu.
The Greek coastguard said that 280 people were rescued but twelve people were still missing from the 183-meter (600-foot) ferry which caught fire near the Corfu island en route from Igoumenitsa, a port in Western Greece, to the Italian port of Brindisi, a nine-hour journey.
The missing passengers were from Bulgaria, Greece, Turkey and Lithuania, the Greek coastguard said.
“The fire is still burning and firefighting vessels have been trying to put it out,” Shipping Minister Giannis Plakiotakis told Skai television on Saturday.
Aerial footage released by the Greek coastguard on Friday showed rows of burnt trucks on the blackened deck after flames swept through the ship, owned by Grimaldi Lines.
Late on Friday, Greek crews rescued two people, a Bulgarian and an Afghan citizen, who was not on the official list of missing people. They were taken to the hospital of Corfu, the company said in a statement.
Bulgaria’s foreign ministry said 127 of its citizens were on board.
Most of those rescued are now being accommodated in hotels on Corfu.
“I have been coming and going for so many years, I have never experienced such a situation before,” 50-year-old Greek truck driver, Giorgos Parlatzas, who was evacuated from the ship, said from a Corfu hotel.
The ferry was carrying 153 vehicles, Grimaldi Lines said.
The cause of the blaze is being investigated and authorities will have more evidence once the ship is tugged to a safe place, Plakiotakis said.