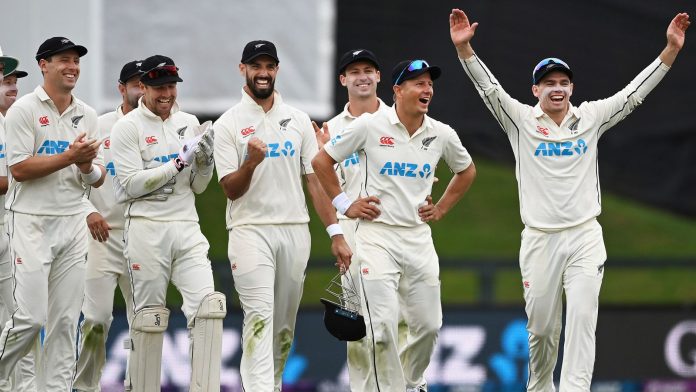 New Zealand clinched victory over South Africa by an innings and 276 runs in the first Test in Christchurch; the Black Caps wrapped up the win before lunch on day three as Tim Southee took 5-35 to skittle the Proteas for 111 in their second innings; second Test starts Friday at Hagley Oval

New Zealand completed a one-sided demolition of a pitiful South Africa, winning the first Test by an innings and 276 runs before lunch on day three day on Saturday.

Tim Southee took five wickets as New Zealand bowled out South Africa for 111 in their second innings, a paltry total that was actually better than their first-innings haul.

The result ended a 16-match winless streak by New Zealand in Tests between the two nations.

The Black Caps have never won a series against South Africa but will break their duck barring a major turnaround in the second Test of the two-match series.

“It’s a special victory,” Southee said. “It’s obviously a side we haven’t had a lot of success against. As history suggests, they are tough opposition and we know they’ll bounce back.

“It was a clinical three days from everyone. Different guys stepped up at different times. It’s the way we want to play and have played for NZ for a long time now.”

Resuming at 34-3 in their second innings at the Hagley Oval in Christchurch, South Africa lost their remaining seven wickets in only two-and-a-half hours, their batters having no answer to New Zealand’s relentless pace attack.

Southee bowled with his usual precision, taking 5-35, while Player of the Match Matt Henry picked up 2-32 to add to the seven wickets he collected in the first innings.

Not a single South Africa batter made a half-century in the match, with Temba Bavuma’s knock of 41 in the second innings the best of the bunch.

The second Test, also in Christchurch, starts on Friday, leaving South Africa with nearly a week to regroup from their shocking performance.

There were mitigating circumstances, as they had to endure a 10-day lockdown on arrival, and also crucially lost the toss on a wicket that offered New Zealand’s always dangerous pace attack plenty of assistance on the first morning.

Still, the dominance of the reigning world Test champions suggests the visitors face an uphill task to claw back and draw the series.