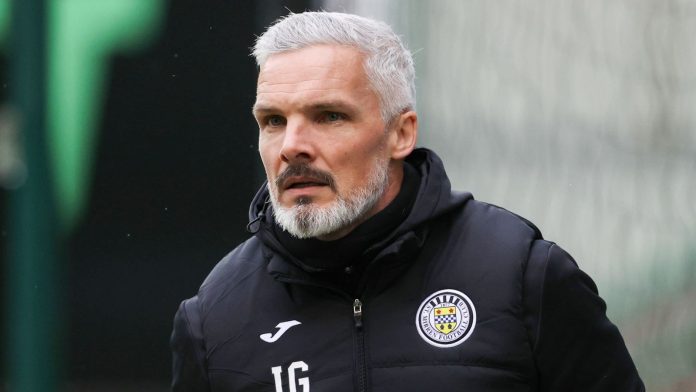 Aberdeen have appointed Jim Goodwin as their new manager on a two-and-a-half-year deal.

The former Republic of Ireland international, 40, left his role as St Mirren boss to replace Stephen Glass, who was sacked on Monday following the club’s Scottish Cup exit.

Goodwin will be joined by assistant Lee Sharp at Pittodrie and will be at Saturday’s match against Motherwell.

Ex-Hibernian manager Jack Ross had also been linked with the job while ex-Celtic midfielder Paul Lambert stated an interest in the role.

Aberdeen are eighth in the Scottish Premiership, two points behind St Mirren who are now searching for a new manager.

Goodwin said: “I am hugely honoured to have been offered the role of manager at this great football Club.

“I would like to thank the board for putting their trust in me and I will do all I can going forward to repay the faith they have shown in me.

“The opportunity to work at one of the biggest club’s in the country is a dream come true, and I can’t wait to get started.

“Not only does Aberdeen FC have a great history and fan base, but it also has a clear ambition to be successful both on and off the pitch, an ambition which matches my own. You only need to see the level of investment made at Cormack Park to realise that.

“I can guarantee everyone connected to Aberdeen FC that I will give my all on a daily basis to ensure the club has the success it so richly craves and deserves.”

Aberdeen FC chairman, Dave Cormack added: “Jim is a young, successful manager who is ambitious and relishing the opportunity to bring success to the Club.

“He fully embraces our vision and strategy and on behalf of everyone associated with Aberdeen Football Club we welcome Jim as our new manager.”

As a player, the midfielder made 181 appearances for St Mirren and captained the team to League Cup success in 2013.

St Mirren coach Jamie Langfield, who faced the media on Friday while Goodwin held talks with Aberdeen, admits he can understand why the 40-year-old has joined his former club.

Langfield spent 10 years at Aberdeen as a player, lifting the Scottish League Cup in season 2013-14.

“It is a big club in the Scottish game and I can understand why he’s attracted to it,” Langfield said.

“Like any manager or professional football player you want to develop and go and test yourself against the best.

“That’s no disrespect to St Mirren because what we’re got here is incredible and I’m very lucky to be part of it.

“He’ll get a shock at how big the club is when he gets up there.”