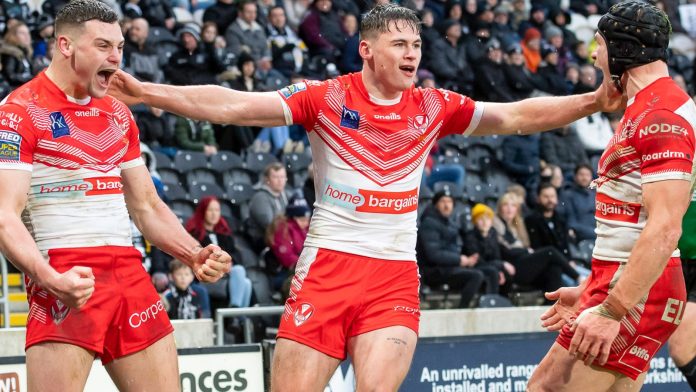 Champions St Helens overcame a snowstorm and 12-man Hull FC to continue their imperious start to the Betfred Super League season with a 38-6 victory at the MKM Stadium.

England centre Mark Percival scored his 100th try for Saints as they took advantage of the 30th-minute dismissal of Hull captain Luke Gale on his home debut to romp to a second consecutive comprehensive win, a 12th in a row over the Black and Whites.

The game was a tribute to Hull’s all-time great Johnny Whiteley MBE, the former Ashes-winning Great Britain coach who died this week at the age of 91.

The Black and Whites, fresh from an opening-round win at Wakefield, were already trailing 14-0 when Gale was sent off for catching Jonny Lomax on the knee with his studs after the Saints stand-off had kicked the ball.

It was the fourth red card nine matches into the new season, while referee Chris Kendall also issued a yellow to Hull centre Connor Wynne for a dangerous tackle on Jack Welsby.

With a numerical advantage for an hour, it was simply a stroll in the park for Kristian Woolf’s men.

Winger Josh Simm, deputising for the injured Will Hopoate, was the chief beneficiary as he crossed unopposed for two of his side’s six tries before half-time and had another disallowed for a forward pass.

Hull, without Jake Connor and Andre Savelio through suspension, created the first scoring opportunity when Gale kicked into space for Adam Swift but the ball just eluded the former Saints winger and it proved to be a rare incursion into the visitors’ 20-metre area.

Full-back Welsby got Percival ghosting through the Hull defensive line for the opening try on eight minutes and Tommy Makinson kicked the first of his seven goals from as many attempts, easing the concerns over the team’s goalkicking worries from the opening game.

Makinson added a penalty and converted Simm’s first try on 25 minutes which was scored straight from a scrum.

That try came while Wynne was in the sin bin and Gale had been given his marching orders when Simm collected Welsby’s cut-out pass to score his second try a minute before half-time.

Welsby, who was never far from the action, scored the visitors’ fourth try on 51 minutes, winning the race to his own grubber kick to the line at almost the same spot he grabbed the match-winning try in the 2020 Grand Final.

But Saints second rower Sione Mata’utia slid over for another score and scrum-half Lewis Dodd kept his feet on the treacherous surface to register his side’s sixth try to round off another impressive show from the champions.