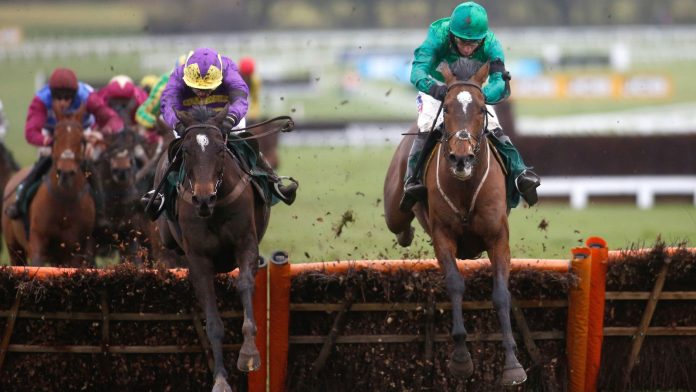 Wholestone made a successful return from almost a year and a half on the sidelines with a determined display in the William Hill Rendlesham Hurdle at Haydock.

Although a high-class performer over hurdles and fences on his day, the Nigel Twiston-Davies-trained veteran looked to have plenty on his plate on his first competitive appearance in 455 days.

But despite his lengthy absence, Wholestone proved he retains both the talent and the enthusiasm for the job at the age of 11 to claim Grade Two honours on Merseyside under the trainer’s son, Sam.

Grand National hope Top Ville Ben and 2-1 favourite Molly Ollys Wishes took the field along for much of the extended three-mile journey, with Top Ville Ben striding into a clear lead before the home turn.

Wholestone looked booked for for the runner-up spot at that stage, but the demanding conditions took their toll on Top Ville Ben late on and Wholestone dug deep on the run-in to score by 13 lengths.

Nigel Twiston-Davies, whose phone was exploding with well-wishers, said: “He’s a very popular winner, he’s a very special horse and he’s done an awful lot in his time – but he’s not in the Stayers’ Hurdle!

“He might be supplemented, you never know, but I wouldn’t have thought so. I’d say the Aintree race (Liverpool Hurdle) is the one for him.

“He’s always had a lot of class and you have to remember he’s very good over fences, so the world is his oyster now.

“That was some performance. He’s a class horse, so why shouldn’t he run well? But he was written off in the press. I wasn’t really expecting it, though.

“He’d been off for so long because he hurt his foot badly when he fell here (November 2020), but it’s all right now, he even lost a shoe today.”

Top Ville Ben’s trainer Phil Kirby was pleased with the performance of the gallant runner-up.

He said: “He’s run a blinder and done nothing wrong, he’s just been beaten by a better horse on the day.

“I know he looked very tired at the end, but there’s not a bother on him and he wasn’t distressed or anything.

“The National is the plan now as long as there is cut in the ground – I just hope it’s not as deep as today!

“He took to the fences really well in the Becher Chase. I know he fell but he’d jumped them grand before that.”