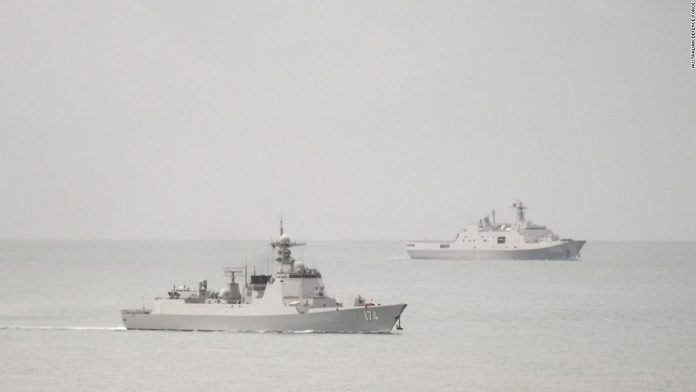 “Acts like this have the potential to endanger lives,” the statement from the Australian Defence Force said, adding it strongly condemns the “unprofessional and unsafe military conduct.”
Pilots targeted by laser attacks in the past have reported disorienting flashes, pain, spasms and spots in their vision and even temporary blindness.
“During critical phases of flight when the pilot does not have adequate time to recover, the consequences of laser exposure could be tragic,” a US Federal Aviation Administration document says.
The incident occurred on Tuesday, the statement said, when an Australian P-8A aircraft, a reconnaissance and anti-submarine warfare plane, was flying over the Arafura Sea, the body of water between Australia’s Northern Territory and the island of New Guinea to the north.
The Chinese People’s Liberation Army Navy (PLAN) ship that pointed the laser at the Australian jet was one of two PLAN warships sailing east across the Arafura Sea at the time, the Australian military said.
It released photos of two Chinese ships with the statement, which, according to their hull numbers, are the guided-missile destroyer Hefei and the amphibious transport dock Jinggang Shan.
Australia did not say which of the two ships pointed the laser at the Australian aircraft.
After the incident, the Chinese ships passed through the Torres Strait into the Coral Sea, the statement said.
China had no immediate comment on the Australian allegations.
The incident is not the first report of Chinese vessels pointing lasers at Australian aircraft.
In May 2019, Australian pilots said they were targeted multiple times by commercial lasers during missions over the South China Sea.
And in a report in June 2018, US military officials told CNN that there were at least 20 suspected Chinese laser incidents in the eastern Pacific from September 2017 to June 2018.
Military tensions between China and Australia have been on the rise, and spiked in November when Canberra said it was entering a pact with the United States and United Kingdom to acquire nuclear-powered submarines.
The day the sub deal was announced, Chinese Foreign Ministry spokesperson Zhao Lijan said Australia should “seriously consider whether to view China as a partner or a threat.”

Exclusive: China operating over 100 police stations across the world with the help of some host nations, report claims