Home World No Relief in Sight from Southwest’s Megadrought, the Worst in 1,200 Years 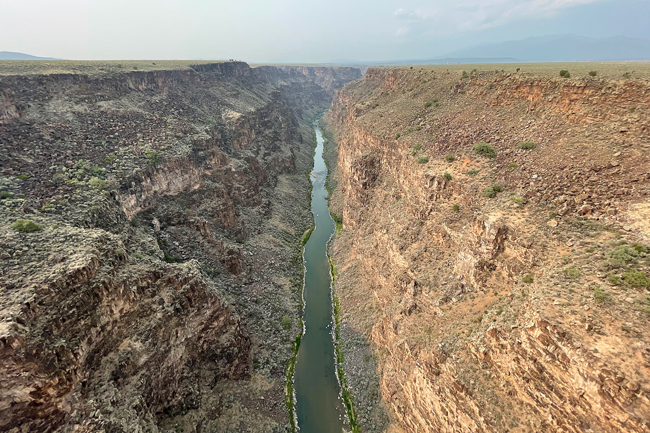 That was the essence of December’s weather story in California. (With apologies to H. Allen Smith, whose 1930 weather forecast began with, “Snow, followed by small boys on sleds.”)

The month began grimly, with 80 percent of California suffering from extreme drought or worse. On December 1, the statewide snowpack — a source of drinking water for 23 million people — stood at just 18 percent of normal. But then atmospheric rivers drove a fleet of Pacific storms ashore. Laden with moisture, they unloaded so much precipitation that the snowpack swelled to 160 percent of normal by Dec. 30.

As the snow piled up, so did hopes for easing of an epochal megadrought gripping southwestern North America, including California — the worst in 1,200 years, according to a new study.

That was then. This is now:

An animation of images acquired by NASA’s Terra and Aqua satellites shows the snowpack in California’s Sierra Nevada range shriveling dramatically. On January 1, the snowpack stood at more than 150 percent of normal for the date. By January 23, it has shrunk dramatically, and then even more by February 12, when it came in at just 77 percent of normal. (Credit: Images via NASA Worldview, animation by Tom Yulsman)

As the animation above dramatizes, the snowpack in California’s Sierra Nevada mountains has shrunk significantly since the end of December. (To help you get your geographic bearings, the large lake toward the top-middle of the frame is Lake Tahoe.)

So far in February — typically the wettest month of the year in California — a huge portion of the state has received no precipitation whatsoever. The rest of the month is expected to bring no relief. If that outlook holds up, the first two months of 2022 could wind up in the record books as the driest January and February in California history.

“There’s no precipitation forecast through the remainder of February. And there’s very little precipitation in the long-range forecast for March,” said Erik Ekdahl, a deputy director with California’s Water Resources Control Board, speaking at a recent board meeting. “All this is pointing to, again, some pretty dire conditions statewide for drought.”

Just when the mountains of the western United States should be building up a healthy snowpack to supply towns, farms and industry with water, precipitation has been sparse so far in February across much of the region. (Credit: Copyright ©2022, PRISM Climate Group, Oregon State University, https://prism.oregonstate.edu. Map created Feb. 18, 2022.)

The dryness has extended well beyond the Golden State. As the map above shows, for much of the western United States, the precipitation has just stopped coming in February.

Thankfully, a wet October and December helped fortify the snowpack in some parts of the West. The Pacific Northwest is currently in the best shape, with the region’s snowpack at about 90 percent of average as of February 18th. But southwestern North America, the region enduring a megadrought, is mostly falling behind.

At the heart of this region is the Colorado River Basin, source of water to 40 million people and the lifeblood of a $1.4 trillion economy. On January 10th, the snowpack in the upper portion of the basin — which supplies most of the runoff — was looking quite healthy, coming in at 124 percent of average for the date. Since then, some parts of the region have continued to do well. But for the Upper Colorado River Basin as a whole, snow has accumulated sluggishly. As a result, by Feb. 18, snowpack had withered to 85 percent of average.

This map shows snowpack conditions on Feb. 18, 2022 in the U.S. West, as a percent of the 1991-2020 average. Darker oranges indicative of thinner snowpack tend to predominate within the yellow box, which delineates the portion of North America that’s enduring the most severe megadrought in 1,200 years. (Credit: Natural Resources Conservation Service. Annotation: Tom Yulsman)

More snow than that will be needed to ease drought and forestall continuing drops in the levels of the two largest reservoirs in the United States, Lake Mead (the largest) and Lake Powell. Thanks to the megadrought, the Colorado River flows that feed those reservoirs have diminished by nearly 20 percent since 2000 — even as use of the water has increased.

As a result, levels of both reservoirs dropped so low last August that the U.S. Bureau of Reclamation declared the first ever shortage on the river, triggering substantial cuts to water deliveries this year. Arizona will bear the brunt of the pain, losing about a fifth of its Colorado River supply. (Farmers, not city dwellers, will mostly be affected.)

Unfortunately, the Bureau of Reclamation is projecting that the natural flow of Colorado River water into Lake Powell (which is upstream of Mead) will be just 78 percent of average between April and August of this year. And over the longer run, more cuts in water deliveries are likely.

The recent megadrought study, published in the journal Nature on February 14, provides even more cause for concern.

Some of the same researchers had previously found that 2000 through 2018 was the driest such period since the year 800. Since then, thanks in particular to severe conditions in 2021, things have only gotten worse.

The researchers used tree rings to reconstruct soil moisture and snow conditions dating back to the year 800. They also employed climate modeling to estimate the degree to which human-caused warming was contributing to observed drought.

They found that after the “exceptional drought severity of 2021,” the years from 2000 through 2021 were the driest 22-year period in the 12 centuries since 800. Climate modeling showed that 42 percent of this megadrought could be attributed to the impact of human-caused warming on soils and snowpack. Without this anthropogenic influence, “2000-2021 would not even be classified as a single extended drought event,” the scientists noted.

The scientists also found that the current megadrought is highly likely to continue through a 23rd year. And in 75 percent of the climate simulations they conducted, it continued through a 30th year.

If that does come to pass, it would be a particularly dire outcome.

We’ve known for awhile now that climate change might increasingly enhance the risks of widespread and severe megadroughts taking hold for decades. And now, as the researchers conclude, “this worst-case scenario already appears to be coming to pass.”