Home Sport Carra: PL title race back on | Conte can turn Spurs into... 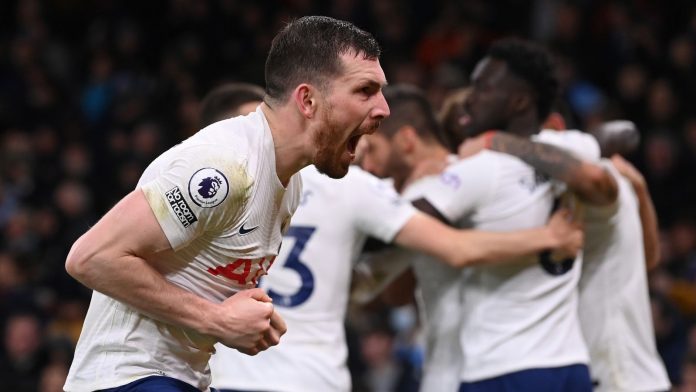 Jamie Carragher says he would still favour Manchester City to defend their Premier League crown, but believes Tottenham’s 3-2 win at the Etihad Stadium has sparked life into the title race.

Harry Kane’s double gave Spurs a shock 3-2 win away at leaders City after Liverpool came from a goal down to beat Norwich City 3-1 on what could prove to be a pivotal day in the Premier League title race on Saturday.

City seemed to have salvaged a point when Riyad Mahrez fired home a penalty in stoppage time at the Etihad, but Kane capped a superb display to head home a dramatic winner three minutes later.

Chasers Liverpool had earlier been given a fright when they trailed struggling Norwich midway through the second half at Anfield. But goals by Sadio Mane, Mohamed Salah and Luis Diaz allowed Jurgen Klopp’s side to close the gap to six points at the top, and they also have a game in hand over City.

FREE TO WATCH: Highlights from Tottenham’s win at Manchester City

With 14 wins from their last 15 games and facing a Tottenham side on a three-match losing streak, City were expected to regain their nine-point advantage. But Antonio Conte’s side had other ideas and claimed a league double over the champions.

Carragher believes the title race is back on following City’s first defeat since losing 2-0 at home to Crystal Palace on October 30.

The Leeds game at Anfield is more important than the Carabao Cup final on the Sunday against Chelsea.

“I’d still favour Man City with Liverpool still to come to the Etihad and I think Liverpool’s fixtures may be tougher. I certainly think for the next four or five days, the Leeds game at Anfield is more important than the cup final on the Sunday against Chelsea.

“There was a little bit of hope that Liverpool could do something, a glimmer of hope, when Man City dropped points at Southampton.

“It was the first time in such a long time that they hadn’t won and you very rarely see a Pep Guardiola team get pegged back so I’d still say they are very much in the hotseat.

“Even a team of Liverpool’s quality coming here to win will not be easy but the great thing not just for Liverpool supporters but for the country is that it looks like we could have a title race on.

“Four to six weeks ago we thought that wasn’t going to be the case so long may it continue.”

Guardiola: We need to win many games

Manchester City manager Pep Guardiola praised Harry Kane’s ability to bring his teammates in to the game after the England captain put in a man-of-the-match performance in Spurs’ 3-2 win in the Premier League.

It was only City’s third league defeat of the season but their second to Tottenham who won the reverse fixture on the opening day of the season when Kane played no part. The champions now have only a six-point lead over Liverpool, who have a game in hand. Jurgen Klopp’s men visit the Etihad in April.

City had 72 per cent possession against Tottenham and Guardiola praised his side’s display, but they could not contain Kane and Heung-Min Son who combined superbly throughout the contest.

“Well, it was a good game. We tried through many sides, especially down the left. It is very difficult, they defend so narrow,” Guardiola said.

“Tottenham have a lot of quality, they give the ball to Harry Kane. They are really good up front. In the first half, they have the goal and no more.

“In the second half they have one attack with Harry Kane at the start and they score. They are clinical. They have Kane and Son and (Dejan) Kulusevski. Their crosses we could not defend.”

On another day City may have won by a handsome margin, but once again Tottenham proved a tricky obstacle for City – reviving memories of their Champions League quarter-final aggregate win in 2019.

Guardiola has steadfastly refused to get drawn into talk of City having the title race in the bag even when they opened up a 12-point lead at the top over Liverpool.

After Tottenham beat Manchester City, Micah Richards and Graeme Souness looked at what implications this will have for the Premier League title race this season.

And he was not panicking on Saturday as his side suffered their first defeat in the league since October when they were stunned by Crystal Palace at the Etihad, after which they picked up 43 points from a possible 45.

“I said a few weeks ago we need to win many games,” Guardiola said. “Every game will be a big, big battle. We knew it, and it will be good to understand how difficult it is. Since October we didn’t lose one game in the Premier League. We knew after three defeats (Tottenham) would be back.

“There was practically no space in the area. After that, they could keep the ball and with Kane, it gave time to Son who could run. In general we were there all the time. We were there but we couldn’t win.”

Conte: It was the perfect performance

Tottenham manager Antonio Conte claims the 3-2 win over Manchester City in the Premier League is an important reaction to the three straight defeats that preceded the victory.

Having won 14 of their previous 15 Premier League matches, this was a setback for City and Conte acknowledged his players had overcome the “best team in the world”.

The Italian said afterwards: “It was a great win for us against a fantastic team like Manchester City. It’s a great compliment to City as tonight they showed to be the best team in the world for their organisation and the players they have. To win a game like this, it means that we had a perfect performance.

“We were very good defensively and had a plan. For sure against City, you know the ball possession is going to be 70 per cent for them but I always say to my players that in the moments we were defending, our mind needed to be on taking the ball and attacking.

“We moved the ball very well and the first goal was outstanding. We prepared for this type of situation. This type of win has to give us confidence in the work we’re doing.

“But we know very well that there are many gams in front of us and we have to fight a lot to stay very close to the top positions.”

‘Conte must understand Spurs remit to be a success’

Jamie Carragher said that Harry Kane’s performance was ‘pure class’ as he inspired Tottenham to a 3-2 win over Man City.

Carragher added: “There was great spirit shown at times the way they hung on and the way they defended. It wasn’t a fantastic performance in terms of dominating the game. Man City do that to almost every opponent.

“The combination of Son and Kane has been so fruitful for so many years but the back three were outstanding, especially Cristian Romero and Eric Dier. That’s what you need. For however much possession and territory City had, they didn’t create too many chances with that domination.

“Conte must take credit and I feel he took a lot of credit earlier on in his time at Tottenham, coming in with nine games unbeaten but of late it hasn’t been of the standard required. Some of the players have let themselves down as well.

“We know they’re not at the same level to compete week in, week out with the top teams due to their inconsistency and that’s where the frustration comes from the manager but I feel for Spurs a little bit as a club when you hear their manager come out and speak like he’s not quite on board.

“I was surprised he took the Spurs job only because they’re not ready to win right now. So if Conte is to stay at Spurs and make it successful it’s going to have to be a longer job than he’s had elsewhere.

“It’s a different remit so if he gets behind the longer-term project and gets the funds he can take Tottenham back to being a major force or certainly where they were under Mauricio Pochettino.”

Up next for Manchester City is another Saturday Night Football clash with Everton at Goodison Park, live on Sky Sports; kick-off 5.30pm.

Tottenham travel to Burnley in the Premier League on Wednesday; kick-off 7.30pm.