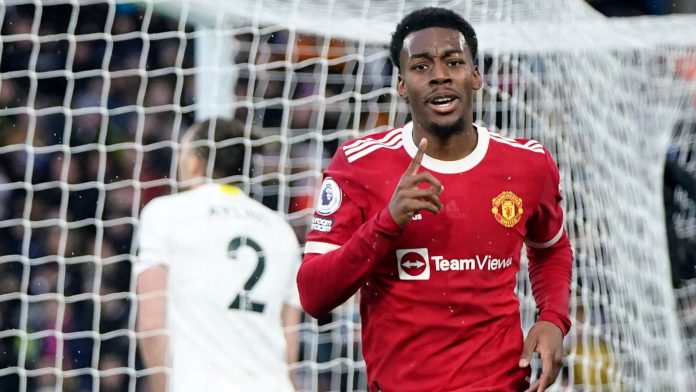 Manchester United held off a spirited Leeds fightback as Ralf Rangnick’s side secured a thrilling 4-2 victory at Elland Road on Super Sunday.

Leeds scored twice in 24 seconds of play at the start of the second-half but late goals by substitutes Fred and Anthony Elanga claimed a deserved win.

After wins for Tottenham and Arsenal on Saturday, Man Utd knew they could not afford to drop points in the race to finish in the Premier League’s top four, and after withstanding plenty of early Leeds pressure, the ferocious Elland Road atmosphere and the sodden conditions, the visitors grew into the game.

And they should have been ahead in the 26th minute when Cristiano Ronaldo wasted a glorious chance to open the scoring. Paul Pogba beat Adam Forshaw and fired in a low cross to set up what looked like a Ronaldo tap in, but Illan Meslier showed brilliant reactions to keep the scores level.

However, Man Utd soon silenced the home fans as they finally scored from a corner at the 140th time of asking. Harry Maguire got the better of Diego Llorente with the under-pressure United skipper powering home a header and wheeling off to celebrate in front of the Leeds fans.

The visitors would be celebrating again deep into six minutes of stoppage time as Jadon Sancho’s superb cross teed up Bruno Fernandes to head home to make it 2-0 at half-time.

Leeds, who had already replaced Robin Koch with Junior Firpo after the defender had picked up a head injury, made a double change as Raphinha and Joe Gelhardt replaced Jack Harrison and Llorente as they looked to get back into the game, and it burst into life for the home side.

Man of the match: Jadon Sancho.

United had not even caught their breath when the hosts stormed forwards once again, with Daniel James driving a low cross to the far post for Raphinha to turn home just 24 seconds later. The video assistant referee checked for a Forshaw foul on Fernandes in the build-up, but the goal stood to send Elland Road wild.

The visitors then made a double change of their own and it had the desired impact for Rangnick, who turned to Fred and Elanga to replace the impressive Pogba and Jesse Lingard. The move paid dividends as the Fred rifled past Meslier to restore United’s advantage in the 70th minute.

And United then made the game safe in the 89th minute as Elanga, who was struck by a missile in the celebrations of Fred’s goal, put his finger to his lips in celebration after slotting past Meslier to round off a big win for Manchester United.

Manchester United made hard work of it, but they were by far the better team.

What does it mean for the Premier league table?

The win means Manchester United move onto 46 points and they have a four-point cushion to the chasing pack, which is lead by West Ham in fifth. Arsenal are also four points behind United, while Spurs are seven back, but both of the north London sides have three games in hand on Rangnick’s side.

United are now just four points behind third-placed Chelsea having played a game more than Thomas Tuchel’s side.

Meanwhile, Leeds have dropped below one point per game for this season as the gap between them and the relegation zone stays at five points.

‘We knew we could hurt Leeds’

“We needed to start the second half better, for sure. They came out right on top of us; their first goal is obviously really lucky, and it got them right back in it and then they scored a good goal.

“We had to fight back and stick together; we knew it was a tough place to come but we knew we had qualities and could hurt them. We said at half-time we needed to score more in the second half and we managed to do that.”

And on Man Utd finally scoring from a corner, he added: “I’m embarrassed by the stat [nearly 140 corners without a goal]. I’m a big part of that set-play routine but as a team, we’ve been nowhere near good enough. If we scored more from set-pieces, we’d be higher up the table.”

‘It is impossible not to be worried’

Defeat and a weekend of positive results from the teams below them leaves Leeds looking perilously over their shoulder at the relegation zone, and Marcelo Bielsa admitted he is increasingly worried about his side’s position.

Speaking to Sky Sports about Leeds’ league position, Bielsa told Sky Sports: “It is impossible not to be worried. We have conceded 50 goals.

“Do you think I cannot be worried? How can I not feel responsible?”

On the game, he added: “In the first half we started well and ended well but didn’t manage to score. In the moments we lost dominance they scored.

“After we got back level, we had the chance to go 3-2 up and straight way they went up and scored again. We played better trying to get back into the game than when we were trying to keep a result, but something has repeated that is difficult to resolve.

“We have to defend better. We are missing Kalvin Phillips and Robin Koch was substituted and we could not count on Pascal [Struijk] in midfield because he went back into defence. Not being able to come with the three defensive midfielders we have, there is a weakness in the recovery of the ball.”

Manchester United’s nine league goals against Leeds this season is the most they’ve ever scored in a single league campaign against the Whites.

Manchester United have scored 10 Premier League goals via substitutes this season, at least four more than any other side.

This was the fourth time Leeds have conceded 4+ goals in a Premier League game this season – no side has done so more often so far this term (also Newcastle and Norwich City).

Leeds have conceded 12 goals from set-piece situations in the Premier League this season (excluding penalties), with only Leicester (14) conceding more such goals so far this term.

Man of the match – Jadon Sancho

Sky Sports’ Gary Neville: “I have to give Sancho man of the match for his two assists.

“He is definitely getting better, and he looks much more comfortable in this Manchester United shirt.

“It’s been Manchester United’s quality, in the end, that has won this game. His delicate chipped cross in the first half for Bruno Fernandes’ goal and the reverse pass to Fred for the third played a crucial part in the win.”

Jadon Sancho has been involved in four goals in his last five games for Manchester United in all competitions (two goals, two assists), twice as many as he was in his first 23 appearances for the Red Devils (two goals).

Leeds travel to Anfield to face Liverpool in the Premier League on Wednesday; kick-off 7.30pm.