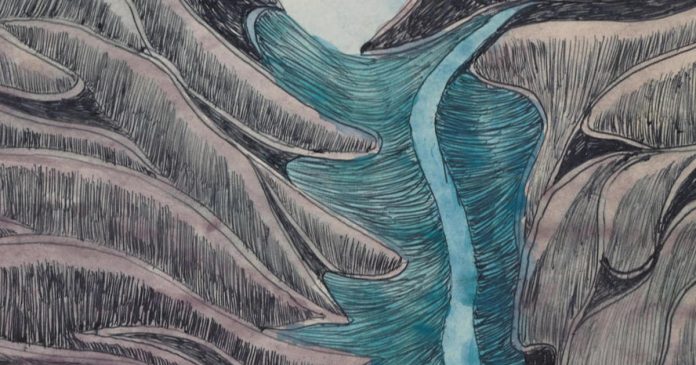 Joseph Yoakum’s drawings in ballpoint pen and colored pencil or pastels are intricate and imaginative. And though they bear handwritten titles of places (from “The Baltic Sea Near Stockholm,” to “Leverest” – thought to mean Mount Everest in the Himalayas), there is little resemblance to those locations.

“Some of these works don’t even look like Earth as we know it,” said curator Esther Adler. “It’s almost like a fantasy landscape that’s occurring in his mind.”

Adler is a curator of an exhibit of Yoakum’s work, now on view at New York’s Museum of Modern Art, and set to travel to the Menil Collection in Houston.

Correspondent Rita Braver said, “He certainly had an inventive imagination, and not just on paper, right?’

“Absolutely,” said Adler. “Very much a real storyteller in every regard.”

For example, it is known that Yoakum was born in 1891 in Ashgrove, Missouri. His mother was African American, born into slavery. His father might have had some Cherokee ancestry, but Yoakum frequently maintained that he was an American Indian born on a reservation.

Braver asked, “Why do you think that he often claimed that he was Native American?”

“He was worried that if people thought of him as a Black artist, it would negatively affect the way they saw the work,” Adler replied. “And so, he would identify himself as a Navajo – or ‘Nava-Joe,’ a joke on his first name – as a way of distinguishing himself, I think, to what was mainly a white audience at the moment that he began to attract attention.”

Yoakum professed to have visited most of the places he drew, saying he traveled with circuses after he ran away from home as a child.  It has been documented that he served in Europe in World War I. Afterwards, he worked odd jobs, bouncing around several states before settling in Chicago.

But he never studied art, and didn’t start making it until he was in his 70s, after he said he had a dream in which God told him to draw.

Here’s how Yoakum saw the entry into Pearl Harbor in Hawaii:

Adler said, “To me, the most fascinating thing about this work is what appears to be a giant head that’s moving towards the shore, but it’s of course a head made out of these curving mountain forms.”

Yoakum got his first show in a coffee house in a church basement, after a passerby, who happened to be an anthropology professor, saw Yoakum’s work hanging in the windows of his apartment. Other shows followed, and soon a group of young artists and their professor at the School of the Art Institute of Chicago started spreading the word about Yoakum’s work.

New York-based artist Cynthia Carlson was visiting Chicago in the late ’60s when an art-world pal took her on her first of several visits to Yoakum’s home studio. She told Braver, “There is a touch – OK, I’ll use the word ‘magical’ – there is a touch to the way he touched the paper, which is quite moving, I think.”

Braver asked, “What do you remember about Yoakum?”

“You know, in one’s lifetime, you probably have an experience of knowing several people, maybe more, and you feel enriched for having known them?” she replied. “He was one of those people to me.”

And when a curator from MoMA was visiting Carlson’s apartment to see her work, he spotted one of Yoakum’s drawings on her wall, and asked, “Whose is that?”

“So, I told him about Yoakum, and he arranged the show,” Carlson said.

Yoakum’s work was featured in a group show at MoMA back in 1971. During his lifetime he sold his drawings for just a few dollars. Today, they go for up to $20,000.

Joseph Yoakum died of prostate cancer at age 81 in 1972, just a decade after beginning his career as an artist.

Carlson said, “Fifty years later, he’s a huge hero to many artists. I don’t know anybody that hasn’t been totally thrilled by the show, and some of them didn’t know who he was. So, this is a completely new revelation.”