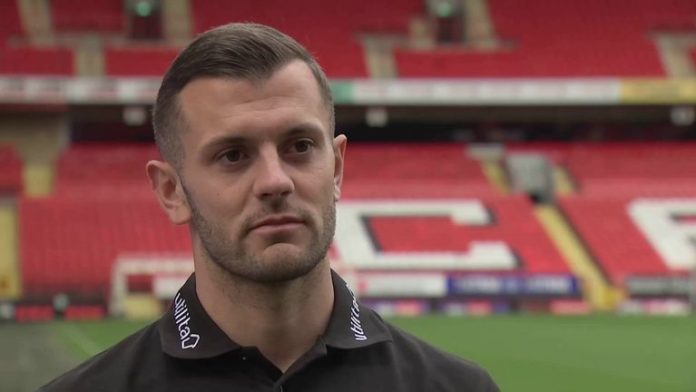 Jack Wilshere has signed for Danish side Aarhus Gymnastikforening on a deal until the end of the season.

Wilshere has the option of extending the deal by a further year and will join his new team-mates for training on Monday. He has been given the No 10 shirt.

The former Arsenal and West Ham midfielder has been without a club since he was released by Bournemouth last summer upon the expiry of his deal.

The 30-year-old had been training with Arsenal and Italian side Como to maintain his fitness as he looked for a new club.

Wilshere said: “Since I started training with Arsenal, I have never hidden the fact that it was to be ready for 2022 and for a new club. Now the right club is here, and it will be an exciting new challenge for me.

Speaking in October, Jack Wilshere said he was not ready to call time on his playing career

“I am in a place in my career where I need to get started again after a difficult period and that opportunity AGF has offered me. For that I am very grateful, and I will do everything I can to live up to the expectations.”

He said: “Jack needs no further presentation and he has shown his worth on both club and national level over the past 10 years. So when the opportunity arose to get him here to Aarhus, we had no doubt that we would like to pursue it. Jack can contribute with his excellent technique and his eye for the game and he will give us some extra offensive tools.

“He is in good physical shape, but obviously lacks some game fitness. But that will soon come, and we look forward to seeing him in the white jersey, when he has settled in.”

Aarhus are seventh in the Danish Superliga and play Vejle Boldklub on Friday.