Home Sport Eubank Jr: I’ll fight Brook – we don’t like each other 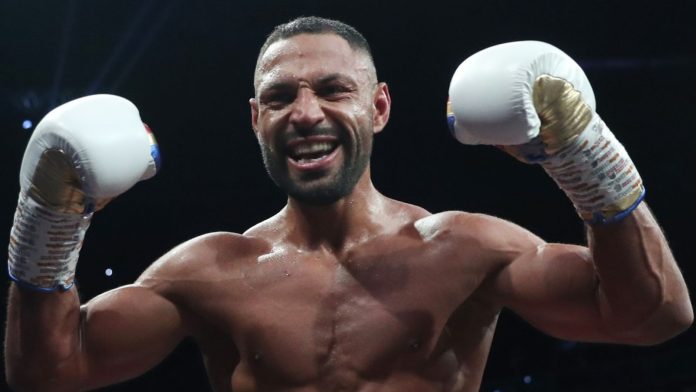 Kell Brook has been challenged to return to the ring to settle an old score by Chris Eubank Jr.

Eubank Jr was ringside in Manchester on Saturday to see Brook put in a brilliant display of power and poise to stop his longstanding rival Amir Khan in six rounds.

Khan has strongly hinted he may retire but Brook, also 35, said “I’ve got my mojo back” and could now enter another all-British grudge match.

“Me and Kell have beef,” Eubank Jr said. “We have history.

“He has said a lot of things about me.

“From a business perspective, I want to fight Brook after this.

“If he [lost, then our fight] would be dead in the water.”

The unlikely rivalry between Eubank Jr and Brook stems back to 2016.

Eubank Jr was in talks to fight Gennadiy Golovkin for the world middleweight title, but instead Golovkin came to the UK to take on Brook.

Brook bravely moved up two weight divisions to challenge the feared Golovkin and suffered the first of his two broken eye sockets in defeat.

But Eubank Jr has never forgotten how his opportunity was taken away by Brook.

They currently operate two weight divisions apart but Eubank Jr has suggested how they could agree a fight: “I don’t see why I should come down, he fought Golovkin at 160lbs. Maybe 158lbs, maybe.”

Eubank Jr said about the popularity of a fight with Brook: “Everybody knows the names, they’re only going to tune into those fights, regardless of those belts.

“You’ll get the hardcore fans interested and those outside. It’s not a random callout.

“We don’t like each other. If we have a chance to settle this, let’s see.

Eubank Jr tweeted at Brook after he beat Khan: “Nice win but let’s see if you can fight like that against me.”

Benn had previously hoped to fight Khan, but instead they posted a picture backstage together and Benn vowed: “We agreed I’d take care of business for him!”

‘Brook should go out on a high’

Sky Sports’ Johnny Nelson insisted Brook should retire after his glorious win: “He has reached his mountain top. That was the fight to take himself away from his family for.

“That was the only fight that could bring him to that point.

“Khan has quenched his thirst.

“There isn’t enough dislike, depth or hatred with Eubank Jr.

“I want to see him go out on a high. This is what people will remember him for.”

Carl Froch agreed: “He hasn’t got another training camp in him [as good as his preparation to fight Khan].

“He was fuelled and motivated by their relationship.

“That dragged him to this performance. It was the pinnacle. He is on the crest of a wave now.”

Iraq: ICRC inaugurates its offices in Nasiriyah in South Iraq

‘We will cry later’: The volunteers feeding thousands left desperate by...