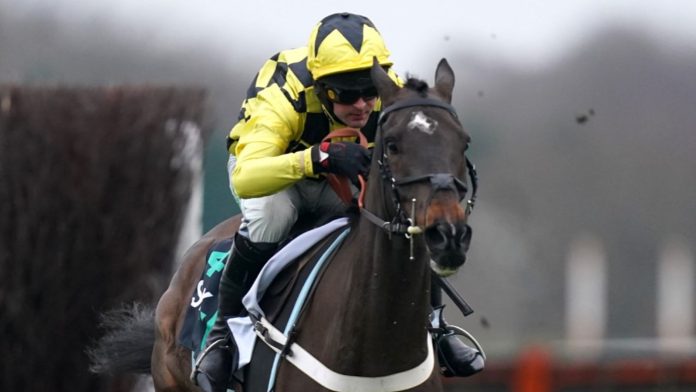 Former jockey and Sky Sports Racing presenter Mick Fitzgerald has cast his expert eye over four of the key contenders for the Champion Chase at the Cheltenham Festival.

This year’s race, run as the feature on day two of the meeting in March, will be one of the most eagerly anticipated contests of the week as Nicky Henderson’s Shishkin and the Willie Mullins-trained Energumene prepare to do battle once more after their mouth-watering clash in the Clarence House at Ascot last month.

Two-time Festival winner Shishkin came out on top on that occassion and is well-fancied to do the same again, although Mullins is set to also send Chacun Pour Soi into battle at Cheltenham, despite disappointing when favourite for the race last year…

He has never been beaten in seven races over fences and he served us up a real treat in the Clarence House at Ascot last month by beating Energumene. It was a fantastic race and like all great rivalries it sets up the rematch.

Shishkin’s record at the Cheltenham Festival reads two from two after winning both the Supreme and the Arkle, beating Eldorado Allen by an easy 12 lengths in the latter contest last year.

His liking for the course definitely gives him an edge over Energumene as Cheltenham form is worth its weight in gold and he has that string to his bow.

In the Supreme everything went wrong for him and he still won and the thing about real good horses, is that they have the knack of still winning when variables go against them.

You can’t get away from his Festival form and if you have two horses in a race that are closely matched and one has won at the Festival and one hasn’t, then there can only be one choice – I would always go for the one with that experience.

For that reason, I can’t see past Shishkin and he will no doubt be produced to perfection on the day.

Strengths – He appears to be able to deal with any adversity.

Weak spot – The flat spot that he can hit hasn’t been a problem so far, but it could be one day.

There are people that think Cheltenham will suit Energumene better than Ascot but I wouldn’t agree, as I definitely think he is a better horse going right-handed, and he has not run at Cheltenham.

He could be inch perfect around there but we just don’t know how he is going to react to the up and downs of the course.

His bold attacking style is a joy to watch and if he doesn’t jump right, he is going to set up a fantastic race. He is a very exciting horse to watch and you need horses like him in these races as they set up the race. He is almost an Edredon Bleu type, and he will go hard from the start.

Around that track, where jumping counts for everything, Shishkin might make a mistake and if this fellow can capitalise, he will push Shishkin to the limit again.

I just feel the tendency to go right-handed around Cheltenham won’t quite add up.

Strengths – He is a very strong traveller, a good jumper and a classy individual.

Weak spot – His tendency to jump right might not be ideal on the Old Course at Cheltenham.

Again, we are talking about horses that are proven at Cheltenham and we have one that is proven in Shishkin and another who is unproven in Chacun Pour Soi.

You get the impression from the Mullins camp that if you had to choose between Energumene and Chacun Pour Soi racing in Ireland, then there is no choice and it would be Chacun Pour Soi every time.

However, it is hard to get away from the fact that the three times he has been to the UK, once he missed the Champion Chase to a small, last-minute setback, and the other twice he has been below par both times.

But, if he can bring his Punchestown form to Cheltenham, and that form he showed when winning at the Dublin Racing Festival the last two years, then the 10/1 offered for the Champion Chase is remarkable each-way value.

He was 8/13 favourite in the race last year and had no excuse when finishing third to Put The Kettle On. It wasn’t as if he was making mistakes or found the track awkward, he was just very disappointing. It’s hard to get away from that and until he proves otherwise the doubts will always be there.

On the performances we have seen, there is nothing between him and Shishkin and his ability to produce his “A” game on the course is the great unanswered question.

Strengths – Some of his career performances have been mind-blowing.

Nube Negra finished a very good second in the Champion Chase last year and was only fourth in the Tingle Creek but I never thought Sandown as a track would suit him. I have always thought that Cheltenham was much better for him and he will be ridden cold, to try and be placed.

He is such a strong traveller and I can see him sneaking into a place if the others get into a war.

I think he has to be respected and he looked a really good horse when winning the Shloer Chase at Cheltenham in November.

In a Champion Chase with Energumene in it, they are going to go a pace that will suit him as he is a good jumper and could be the each-way value.

Strengths – He is a very good jumper and strong traveller.

Weak spot – Clearly a very talented individual but is he good enough on this stage?