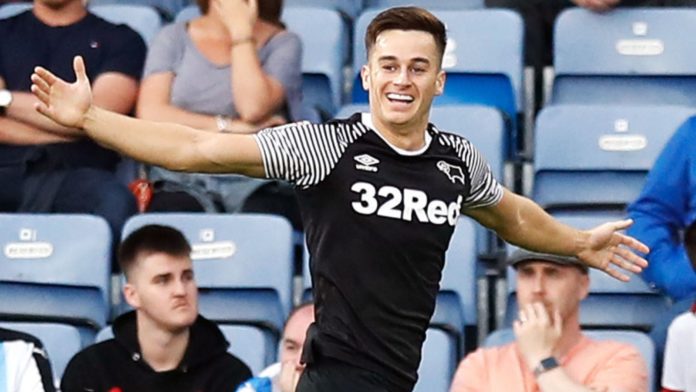 Phillip Cocu off to a winning start as Derby boss as Tom Lawrence scores twice at the John Smith’s Stadium.

Tom Lawrence scored a superb first-half double to get Phillip Cocu’s era at Derby off to a winning start, as they beat Huddersfield 2-1.

Lawrence struck twice in three minutes, both goals coming from outside the box, to set the Rams on their way at the John Smith’s Stadium on Monday night, although Karlan Grant’s penalty soon halved the deficit.

It was the perfect start for Cocu, and an excellent response from Derby to their play-off final defeat in May. Huddersfield, meanwhile, retained a lot of the toothlessness in attack that saw them relegated from the Premier League.

Each side handed debuts to two players. Goalkeeper Jamil Grabara and defender Tommy Elphick started for Huddersfield, while Kieran Dowell and Matt Clarke started for Derby.

There may have been concerns about the creativity of Derby’s attack without Mason Mount and Harry Wilson, but Lawrence seemed determined to prove their wouldn’t be a void in the first half.

His first goal was extremely well taken after 22 minutes. Tommy Elphick’s abysmal attempt at getting the ball back to his goalkeeper with his shoulder put his side under tremendous pressure.

Jamil Grabara, also making his debut for Huddersfield alongside Elphick, was forced to race to the edge of his area and clear with his head, allowing Lawrence the opportunity to lift the ball over two defenders and into an empty net from 20 yards.

Man of the match: Tom Lawrence

His second goal three minutes later was even better. Picking the ball up on the edge of the box from Jayden Bogle, he turned and dug out a brilliant curling effort right into the corner of the net.

Derby were on top but Huddersfield were back in the game on 30 minutes. Juninho Bacuna did well to turn Kieran Dowell in the box and win a penalty, which Grant stepped up to put into the bottom corner.

Huddersfield massively improved in the second half, but failed to create any real clear-cut chances. Elias Kachunga, their top scorer last time they were in the Championship, was arguably presented with the best of them, but he could only blaze over from close range after being introduced as a substitute.

Man of the match – Tom Lawrence

Given more of a free role under Cocu, Lawrence caused all kinds of problems in the first half to Huddersfield as he drifted inside, and his first goal was as cool as his second was classy.

Both sides are back in Sky Bet Championship action at 3pm on Saturday. Derby host Swansea and Huddersfield head to QPR.