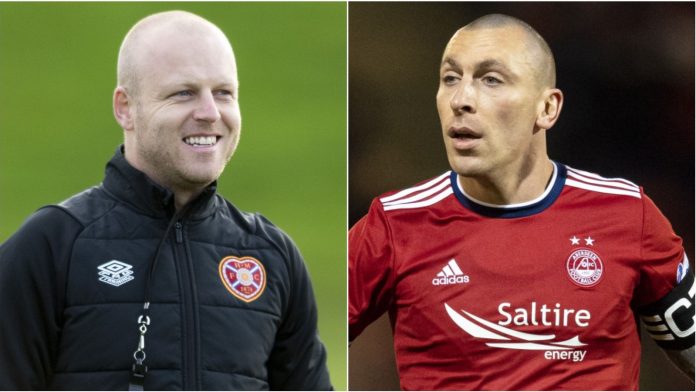 St Mirren have been given permission to hold talks with Steven Naismith over the vacant managerial role at the club.

Former Scotland international Naismith, who retired last summer, is a coach at Hearts and part of the Scotland coaching set-up.

The Paisley club are without a manager after Jim Goodwin joined Aberdeen on Saturday and are considering several candidates, with Dons player-coach Scott Brown also linked with the role.

“If the opportunity comes along for Scott or Steven to go to St. Mirren, they’re going to have to take it,” said Sky Sports’ Kris Boyd.

“If your intention is to become a coach or a manager, you want to manage at the highest possible level that you can.

“You’ve got to earn the right to manage at big clubs, but there are other clubs that have had success by giving younger managers an opportunity.”

Former Scotland assistant James McFadden added: “Steven has been coaching at Hearts, he’s obviously involved with the national team and he’s building a good reputation as a coach.

“Sometimes, I see young coaches that try and map out what they’re going to do and say ‘I’ll build this experience and I’ll move onto the next thing’. But sometimes, the best thing to do is just jump in and just go for it.

“I think if an opportunity comes up, you just need to go for it and see how you go.”

“I think it’s something that Scott will be looking at,” he told Sky Sports News.

“He’s a young coach coming to an end in his playing career. When a job comes up in the Premiership – and St Mirren is a good job, a stable club – I think he’s got to look at it.

“When an opportunity like this comes up and his name’s in the ring, I think he will look at that in a serious way because like I say, St Mirren is a good club, in a good position and with a good squad. It’d be a good first job for him.

“I think Scott’s still got a lot to offer as a player. I think when you look at his performances this year for Aberdeen, he’s been one of the better players. So if he goes there (St Mirren), I think he’d still be tempted to play.

“However, it’s a completely different role – there’s so much on your plate when you’re the manager and if you’re on the pitch at the same time, that’s incredibly difficult.

“You’d need a strong number two beside you, so that one will be interesting if he gets it, but I do think it’ll be something he looks at seriously.”

“Scott has done his apprenticeship in the first half of the season at Aberdeen and the influence he had at Celtic Park behind the scenes was huge as well, he knows how to run dressing rooms.

“Management is a bit different, but he has that about him. So, it’s a big call for St Mirren but I think it’ll be one that will be popular with the fans.

“They know how influential Scott Brown has been in Scottish football over the past 10 to 15 years.”