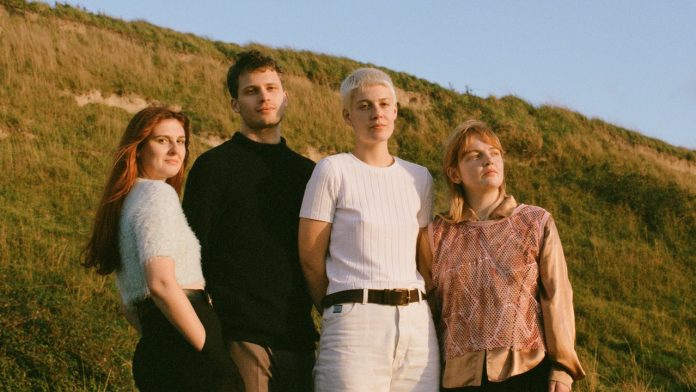 Porridge Radio have announced their third studio album: Waterslide, Diving Board, Ladder to the Sky arrives May 20 via Secretly Canadian. Today, the UK quartet has shared lead single “Back to the Radio,” along with a music video. Check it out below and scroll down for the LP art and tracklist.

“‘Back to the Radio’ feels like a huge introductory hello or a big ceremonial goodbye,” frontperson Dana Margolin said of the single in a press release. “I wrote it at the end of 2019 when we were gearing up for the release of Every Bad and I felt like a lot of things were coming that I wasn’t sure I knew how to handle. The song grew out of a feeling of intense loneliness and being unprepared for what everybody was promising me was about to happen—and a strong desire to escape without knowing what I wanted to escape to. To me there’s a huge feeling of catharsis in this song, of letting go and letting it sweep you away.”

The visual for “Back to the Radio” was shot by Margolin’s sister Ella, and it stars Margolin and her Porridge Radio bandmates, drummer Sam Yardley, keyboardist Georgie Stott, and bassist Maddie Ryall.

Waterslide, Diving Board, Ladder to the Sky follows Porridge Radio’s breakout 2020 album Every Bad. The new album was co-produced by Tom Carmichael, Margolin, and Yardley. “I kept saying that I wanted everything to be ‘stadium-epic’—like Coldplay,” Margolin remarked.

Revisit Pitchfork’s Rising interview “Porridge Radio Make Indie Rock for the Angsty Antisocial in All of Us.”

Waterslide, Diving Board, Ladder to the Sky: