Home Sport Djokovic wins on return | ‘At the moment I can’t enter United... 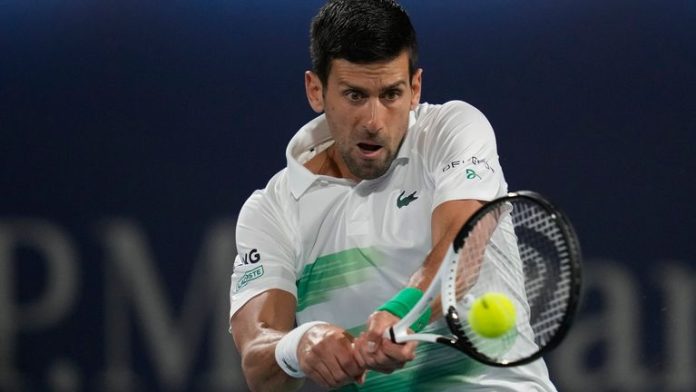 Novak Djokovic played his first match of the year after being deported from Australia last month; the 6-3 6-3 victory took him just 75 minutes; the 34-year-old will now face either Alex de Minaur or Karen Khachanov in the round of 16

The contest marked his competitive return to the Tour and his first match of the year, after being deported from Australia last month.

Djokovic received an extremely positive reception from the fans in the stands, with Serbian flags flying throughout and his name being chanted by the fans.

“I couldn’t have asked for a better reception,” Djokovic said on court after his 75-minute win.

“It’s been a while since I played my last match, I couldn’t have picked a better place to kick-start the season and [have] the best possible experience. Thank you very much for your support and welcoming me the way that you did.”

Djokovic showed few signs of rustiness during his time on court and won 77 per cent of points behind his first serve and saved all seven of the break points Musetti created against him.

The world No 1 struck the ball cleanly from the back of the court and purposefully came into the net to finish off quick points behind his serve too.

Over the course of the two sets, Djokovic made just seven unforced errors in comparison to Musetti’s 13 and the 34-year-old worked well behind his second serve too.

“All in all, it’s a straight-sets win so I have to be satisfied with my tennis, especially after not playing for two-and-a-half, almost three months,” the world No 1 said.

“It’s normal to expect that during the first match after a while [out]. I’m glad that I managed to finish the job in straight sets against a very talented player.”

Djokovic will now face either Alex de Minaur or Karen Khachanov in the round of 16.

Djokovic: As of today I can’t enter the United States

At his press conference after victory, Djokovic admitted that, as things stand, he will be unable to enter next month’s prestigious Indian Wells Masters.

“As of today I’m not able to play. But let’s see what happens. I mean, maybe things change in the next few weeks.”

Former world number one Andy Murray was asked about Djokovic’s situation in his press conference following his win over Christopher O’Connell.

Murray said: “Like I said at the time, I don’t agree with his decision. I think it would be a lot easier for him, obviously, if he was to get vaccinated.

“There is consequences to the decisions he’s made just now. He obviously has to accept that. But I don’t think it’s great for tennis if our best player is not competing in the major events.”