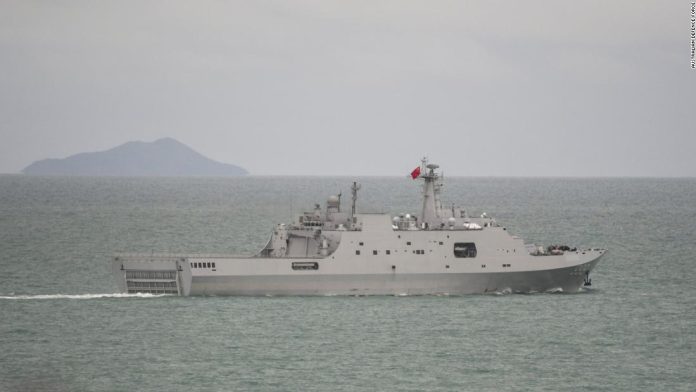 Prime Minister Scott Morrison said Monday he’d called on the Chinese government to explain the “dangerous” and “reckless” act allegedly carried out by a People’s Liberation Army Navy (PLAN) warship last week.
“This was dangerous, it was unprofessional and it was reckless for a professional navy, and we want some answers as to why they did this,” Morrison said. “At worst, it was intimidating and bullying.”
“They’re the ones who need to explain, not just to Australia, but to think of all the countries in our region,” he added. “It could occur to anyone else who is just simply doing the normal surveillance of their own Exclusive Economic Zone.”
Morrison said Monday Chinese authorities had not yet responded to his call for answers.
At a regular briefing in Beijing, China’s Foreign Ministry spokesman Wang Wenbin told reporters the ship was abiding by international law.
“After checking with relevant Chinese authorities, the information released by the Australian side is not true. The normal navigation of the Chinese ship on the high seas conforms to relevant international law and practice and is completely legitimate and lawful,” Wang said.
“We urge the Australian side to respect the legitimate rights of Chinese vessels in relevant waters in accordance with international law and stop maliciously spreading false information about China.”
Earlier, state-run tabloid the Global Times accused Canberra of trying to damage Beijing’s reputation in the South Pacific.
“The Australian military knowingly hyped this with the aim of throwing mud at China,” the article said, citing an anonymous analyst.
The paper accused Canberra of trying to draw attention away from the Chinese military’s aid efforts in the South Pacific, citing the recent delivery of aid to Tonga in the wake of a large volcanic eruption and tsunami and the shipping of Covid medical supplies to the Solomon Islands.
“Australia does not like China providing concrete benefits to other countries near Australia, so it is finding all ways to discredit China,” the story said, citing unnamed analysts.

A defensive act or provocative move?

The incident in question allegedly occurred last week when an Australian P-8A aircraft, a reconnaissance and anti-submarine warfare plane, was flying over the Arafura Sea, the body of water between Australia’s Northern Territory and the island of New Guinea to the north.
The Australian Defense Force said in a statement Saturday the People’s Liberation Army Navy (PLAN) vessel used a laser to “illuminate” the Australian plane.
In the Global Times story, China did not explicitly deny a laser was used on the Australian aircraft, but said it would be normal for a warship to use a laser range finder if an aircraft got to close to a vessel.
“Australia failed to tell the public how close its aircraft flew near the Chinese vessels, so people could not tell if the Chinese vessels were forced to take defensive countermeasures,” the Global Times said, attributing the statement to Song Zhongping, a Chinese military expert and TV commentator.
In the past, pilots targeted by laser attacks have reported disorienting flashes, pain, spasms and spots in their vision and even temporary blindness.
“During critical phases of flight when the pilot does not have adequate time to recover, the consequences of laser exposure could be tragic,” according to a US Federal Aviation Administration document.
Using a laser rangefinder on an aircraft could be considered a provocation as it shows the warship is trying to determine a fire control solution on the aircraft without using the ship’s fire control radar, said Carl Schuster, a former US Navy captain.
He said it’s possible inexperienced operators on the Chinese ship tried to aim the laser at parts of the plane other than its cockpit and failed.
But Peter Layton, a former Australian Air Force officer and analyst at the Griffith Asia Institute, discounted the possibility of the incident being inadvertent.
“The PLA Navy is a highly disciplined navy and there will be several Communist Party political officers on board to advise the captain and make sure he acts in accordance with Party guidance. This means this is not an accident but is a purposeful act, authorized at the highest levels,” Layton said.
The ship that allegedly pointed the laser at the Australian jet was one of two PLAN warships sailing east across the Arafura Sea at the time, the Australian military said.
It released photos of two Chinese ships with the statement, which, according to their hull numbers, were the guided-missile destroyer Hefei and the amphibious transport dock Jinggang Shan.
Australia did not say which of the two ships pointed the laser at the Australian aircraft.
The incident is not the first report of Chinese vessels pointing lasers at Australian aircraft.
In May 2019, Australian pilots said they were targeted multiple times by commercial lasers during missions over the South China Sea.
And in a report in June 2018, US military officials told CNN that there were at least 20 suspected Chinese laser incidents in the eastern Pacific from September 2017 to June 2018.
Military tensions between China and Australia have been on the rise, and spiked in November when Canberra said it was entering a pact with the United States and United Kingdom to acquire nuclear-powered submarines.
The day the sub deal was announced, Chinese Foreign Ministry spokesperson Zhao Lijan said Australia should “seriously consider whether to view China as a partner or a threat.”