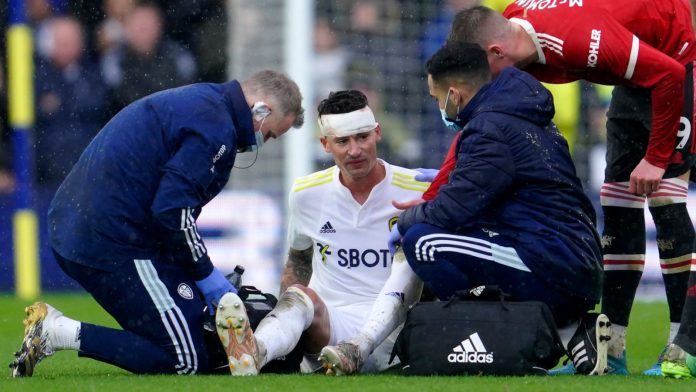 Marcelo Bielsa has made an impassioned defence of how Leeds’ staff responded to Robin Koch’s head injury during Sunday’s defeat to Manchester United.

Koch returned to the action after sustaining a cut forehead in a first-half collision with Scott McTominay and was later taken off due to showing the symptoms of concussion.

Following the incident, brain injury charity Headway and the Professional Footballers’ Association have both criticised the current protocols, claiming they do not prioritise player safety.

Bielsa said: “If there’s something that the medical staff at Leeds have done, and I as an extension of their decisions, it’s to abide strictly by the rules whether by Covid or any knocks to the head or any other case.

“If any club has acted impeccably with the rules regards to health, it’s Leeds.”

Bielsa said neither he nor his medical staff had any reason to believe Koch was suffering from anything other than bleeding from the cut when he was allowed back on to the field.

“We did nothing different to the protocol,” he said. “We did everything according to the protocol. I was convinced it was just the bleeding from the cut. That was the first conclusion after the evaluation the player had.

“When he manifested different symptoms, he was substituted. The control the player receives when they get this type of knock, the protocol that is applied is what generates whether he should be substituted or not.”

Bielsa said he did not want to abuse the concussion substitution rules.

He added: “I stayed with the initial position with the absurd idea of not wanting to abuse the rules.

“The prevention of the knocks on the heads of the players is very serious, very important. That can generate real dramas. But it’s also true that you should not dramatise situations that don’t deserve to be interpreted in the way this situation has been interpreted.”

Bielsa also stressed referee Paul Tierney made the correct decision by not penalising McTominay for his challenge on Koch.

He said: “I value McTominay did not receive a sending off. It was right it was that way because he had no intention to hit Koch.”

Luke Griggs, the deputy chief executive of the brain injury charity Headway says further changes are still needed when it comes to dealing with on-pitch concussion.

Headway said “enough is enough” and demanded answers from Premier League bosses after Koch was allowed to play on at Elland Road after the collision with McTominay.

The concussion protocols in the Premier League have been devised by IFAB and were approved by football’s lawmakers towards the end of 2020.

“Medics have a tough time when trying to make on-pitch concussion assessments. The game simply has to help them by implementing temporary concussion substitutes.

FREE TO WATCH: Highlights from Manchester United’s win against Leeds United in the Premier League

“It is hard to believe that if they had 10 minutes to assess the player in the quiet confines of the dressing room that they would have come to the conclusion that he was fit to continue.

“We need urgent answers from the Premier League as their reputation is on the line here.

“Concussion protocols in all sports clearly state ‘if in doubt, sit it out’. The Premier League needs to come out and explain to everyone – particularly impressionable youngsters and grassroots players – what the word ‘doubt’ actually means because I think we have a different definition.”

Griggs added: “The days of Terry Butcher soldiering on with a bloody bandage are gone. We cannot continue with a ‘patch them up, get them back out there’ approach to head injuries. Players must be protected.

“There needs to be greater transparency with these incidents. Silence from the Premier League is not helping. Instead, it is just confusing matters and undermining all efforts to lead an evolution of attitude towards head injuries at the grassroots level. Enough is enough.”

Koch was left covered in blood after clashing with McTominay in the 12th minute but returned to the pitch with his head bandaged before going down again and eventually being withdrawn in the 31st minute.

Football Association guidelines state that any player who sustains a suspected concussion should immediately be removed from the pitch, and extra permanent substitutions are allowed in such cases.

The PFA said in a statement on Twitter: “The injury to Leeds United’s Robin Koch demonstrates again that the current concussion protocols within football are failing to prioritise player safety.

“We see frequent incidents of players returning to play with a potential brain injury, only to be removed shortly afterwards once symptoms visibly worsen.”

The PFA added: “Put simply, the current rules set by IFAB (the International Football Association Board) are not working, and players are being put at risk.”

The injury to Leeds United’s Robin Koch demonstrates again that the current concussion protocols within football are failing to prioritise player safety.#thread 👇 pic.twitter.com/RgDVZqXmtX

Leeds said in a statement that Koch had passed all of the on-field concussion screening tests that are currently part of the Premier League’s protocols.

They added: “The player was told if he developed any symptoms he should sit down on the field of play and would be substituted immediately, which is what Robin did in the 29th minute of the game.

“The medical staff at Leeds United have always been in favour of temporary substitutions for head injuries, as it would allow the staff more time to assess an injury and allow a period for symptoms to potentially develop.

“Robin will follow the concussion protocols before returning to play.”

Thank you for your many messages. I wanted to support the team for longer yesterday, but unfortunately I couldn’t do it. Thanks to our medical staff for the good care. I feel much better today and will be back soon. @LUFC pic.twitter.com/L6DXflFzAP

German international Koch, who will miss Wednesday’s game at Anfield against Liverpool, thanked Leeds’ medical staff “for the good care” in a message posted on Twitter.

Koch said: “Thank you for your many messages. I wanted to support the team for longer yesterday, but unfortunately I couldn’t do it. Thanks to our medical staff for the good care. I feel much better today and will be back soon.”

Warnock: Take decision out of the players’ hands

“Take the decision out of the player’s hands, that’s the big thing for me because all players don’t want to come off the pitch.

“They don’t want to come off in a game against Manchester United at a bouncing Elland Road in a game they know they’ve got to get something out of.

“The player is never going to say he wants to leave the pitch. It’s not going to happen and that’s when the physios and doctors have to say, ‘I’m sorry, but you’re coming off’.

“You could visibly see [he wasn’t right]. He could barely walk coming off the pitch and you think, ‘How have we got ourselves into that situation?’

“So we need to take it out of the player’s hands. I think that’s something we can all agree on because it’s the safety of the player.”

“The referee has to trust the doctor and the people who are assessing the player. It’s all down to them, they’re the experts.

“The referee is there to be informed and he was informed the player was alright to continue, so he can’t really go against that.”

Watch free highlights of the four midweek Premier League games – including Liverpool vs Leeds and Burnley vs Spurs on Wednesday – on SkySports.com and the Sky Sports App shortly after full-time.