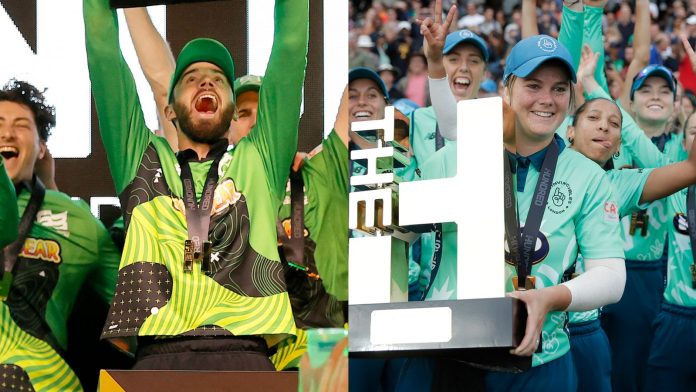 Over 150 men’s and women’s players from 2021 have been retained by their team; 28 centrally contracted England players and 19 international names confirmed so far; Heather Knight, Jos Buttler, Sophia Dunkley, Joe Root, Kate Cross and Moeen Ali among the England stars confirmed

The players being retained for this summer’s second edition of The Hundred, live on Sky Sports, have been announced.

Current men’s champions Southern Brave retain 10 players with Chris Jordan, Tymal Mills and James Vince all returning for year two along with Jofra Archer, who was signed last year but unable to play because of injury. The women’s squad have retained England trio Anya Shrubsole, Danni Wyatt and Sophia Dunkley as well as Smriti Mandhana.

Birmingham Phoenix welcome back the likes of England star Moeen Ali, Tom Abell and the biggest hitter of last year’s competition in Liam Livingstone, to their men’s squad. As they have nine players retained they will be looking to fill five spots in The Draft.

The women’s side have announced 12 retained players including a few of those who couldn’t make it last year due to Covid-19 restrictions. Australian all-rounder Ellyse Perry and New Zealand captain Sophie Devine will join Phoenix playing alongside Amy Jones, Kirstie Gordon and Issy Wong.

London Spirit have kept on England Women’s captain Heather Knight as well as breakout star Charlie Dean and England teammate Freya Davies. The women’s side will be looking to sign seven more players to complete their team whereas the men’s have six spots to fill in The Draft. Eoin Morgan will again lead the Lord’s home-side with a star-studded dressing room including Ravi Bopara and Aussie batter Glenn Maxwell.

The world’s top ranked women’s IT20 bowler, Sophie Ecclestone, will remain with the Manchester Originals along with recently England-capped Emma Lamb and South African batter Lizelle Lee. The men’s team have a wealth of homegrown talent staying with them in Phil Salt and Matt Parkinson as well as England keeper Jos Buttler.

Adil Rashid, Ben Stokes, Faf du Plessis and Harry Brook are just a few names that have signed with Northern Superchargers for 2022. The women’s side welcomes back the top individual run scorer of the women’s competition, Jemimah Rodrigues, who stole the show with a stunning 92 not out against Welsh Fire at Headingley last year.

Welsh Fire have re-secured England stars Jonny Bairstow, Jake Ball and Ollie Pope and the women’s squad will see the return of West Indian all-rounder Hayley Matthews, Katie George and Claire Nicholas, who returns in 2022 after opting out of the 2021 competition following the birth of her second child.

Each team has a minimum of one England Test-contracted player and up to three overseas stars, while anyone who is not retained goes into The Hundred Men’s Draft on March 30.

The men’s teams could retain up to 10 members of their 2021 squad and assign them across seven wage bands, while women’s teams were able to retain as many players as they wished.

Sky Sports will show every game of The Hundred live this summer, starting with the opening match on Wednesday August 3 between defending men’s champions Southern Brave and Welsh Fire at The Ageas Bowl.

The women’s competition begins a week later on Thursday August 11 following the conclusion of the 2022 Commonwealth Games in Birmingham, as Oval Invincibles take on Northern Superchargers.

Teams will now turn their attention to planning which new players they want to snap up to strengthen their line-ups this year.

The men’s squads will fill their remaining slots at The Hundred Draft on 30 March, where they will take turns to pick from the hundreds of domestic and international cricketers expected to sign up in search of earning a place in the competition. London Spirit will have the first pick followed by Welsh Fire and Manchester Originals. Welsh Fire will be the busiest side during The Draft, with seven slots to fill, including three overseas spots.

New signings, both domestic and overseas, will be announced by the women’s side on the same day, including any England women’s stars who have signed for a new team in 2022.

For the first time, both men’s and women’s sides will be able to select an additional fourth overseas player for their squad in an overseas Wildcard Draft in June. Teams will still only be able to field three overseas players in their playing XI.

The women’s teams will be finalised through the open market signing process, which concludes at the end of June, giving domestic players plenty of motivation to catch the eye during the Charlotte Edwards Cup. The men’s squads will be finalised in early July with the domestic Wildcard Draft pick.

Fans will be able to get their hands on tickets in two priority windows, firstly from today County members can get exclusive first access to tickets for themselves, friends and family. From tomorrow (23 February) previous ticket buyers can buy tickets and then previous attendees will be able to buy 48 hours later on 24 February.

A second window will begin on 31 March for anyone who has signed up via thehundred.com. Tickets will then go on general sale on 20 April.

Tickets start at £5 for under 16s and free for children aged five and under with activities around the ground to entertain families.