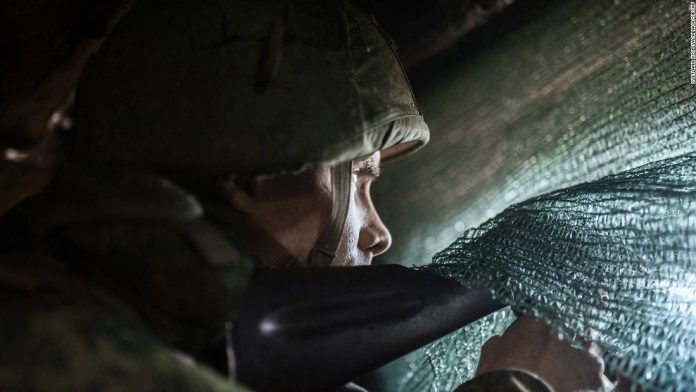 The Kremlin’s decree recognizing the so-called Donetsk and Luhansk People’s Republics, in Ukraine’s eastern Donbas region, is a sharp escalation in a long-running conflict.
For almost eight years the breakaway enclaves have been the site of a low-intensity war between Russian-backed separatists and Ukrainian forces which has left more than 14,000 people dead.
But Putin’s decision to send forces into the area has raised fears of a broader war in Ukraine. Here’s a look at how the conflict started:

What’s the recent history in Donbas?

War broke out in 2014 after Russian-backed rebels seized government buildings in towns and cities across eastern Ukraine. Intense fighting left portions of Luhansk and Donetsk, in the Donbas region, in the hands of Russian-backed separatists. Russia also annexed Crimea from Ukraine in 2014 in a move that sparked global condemnation.
The separatist-controlled areas in Donbas became known as the Luhansk and the Donetsk People’s Republics. The Ukrainian government in Kyiv asserts the two regions are, in effect, Russian-occupied. The self-declared republics are not recognized by any governments, other than Russia and its close ally Syria. The Ukrainian government refuses to talk directly with either separatist republic.
The Minsk II agreement of 2015 led to a shaky ceasefire agreement, and the conflict settled into static warfare along the Line of Contact that separates the Ukrainian government and separatist-controlled areas. The Minsk Agreements (named after the capital of Belarus where they were concluded) ban heavy weapons near the Line of Contact.
Language around the conflict is heavily politicized. The Ukrainian government calls separatist forces “invaders” and “occupiers.” Russian media calls separatist forces “militias” and maintains that they are locals defending themselves against the Kyiv government.
More than 14,000 people have died in the conflict in Donbas since 2014. Ukraine says 1.5 million people have been forced to flee their homes, with most staying in the areas of Donbas that remain under Ukrainian control and about 200,000 resettling in the wider Kyiv region.

How has Putin stoked the conflict?

The separatists in Donbas have had substantial backing from Moscow. Russia has long maintained that it has no soldiers on the ground there, but US, NATO and Ukrainian officials say the Russian government supplies the separatists, provides them with advisory support and intelligence, and embeds its own officers in their ranks.
Moscow has also distributed hundreds of thousands of Russian passports to people in Donbas in recent years. Western officials and observers have accused Russian President Vladimir Putin of attempting to establish facts on the ground by naturalizing Ukrainians as Russian citizens, a de facto way of recognizing the breakaway states. It also gives him a reason to intervene in Ukraine.
Last week, the Russian parliament recommended that the Kremlin formally recognize parts of the LPR and DPR as an independent states, another escalation in rhetoric that US officials said at the time demonstrated that Putin has no intention of abiding by the Minsk agreement.
Ukraine’s Foreign Minister Dmytro Kuleba said Ukraine would “not stop until we free our territories in Donbas, Crimea, until Russia pays for all the damage it caused in Ukraine.”
Putin has long accused Ukraine of violating the rights of ethnic Russians and Russian speakers in Ukraine, and has said it was within Russia’s rights to militarily intervene to protect them.
In recent weeks, Putin has alleged that “genocide” was being committed in Donbas. His allegations aren’t new, but the timing is of concern to Western policy-makers, who fear a repeat of a 2008 conflict in Georgia.
By invoking genocide, Putin was echoing Russia’s false claim that Georgia committed genocide against civilians in the breakaway republic of South Ossetia in August 2008. During that brief conflict, Russia launched a massive military incursion that pushed deep into Georgian territory.
As it was in 2014, the Donbas region is now the crucible of the conflict between east and west, between Putin’s drive to reassert control — weakening the Ukrainian state — and the growing aspiration of Ukrainians to join the fold of European democracies.