Home Sport Flores: Race a factor in my firing from Dolphins 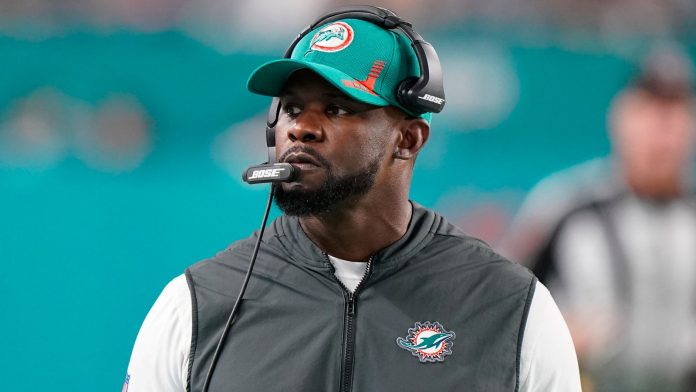 Flores has alleged he was given tasks he does not think would have been required of white head coach during his three-year spell with Miami Dolphins; the 40-year-old was let go by the franchise in January and is now on Pittsburgh Steelers’ staff; Flores has filed lawsuit against NFL

Former Miami Dolphins head coach Brian Flores believes race was a factor in the NFL team’s decision to fire him in January.

Speaking on the I Am Athlete podcast, Flores alleged he was given tasks he does not think would have been required of a white head coach.

Flores – recently hired as a senior defensive assistant for the Pittsburgh Steelers – filed a class-action lawsuit against the NFL alleging racist hiring practices and has no plans to abandon the lawsuit despite his return to coaching in the league.

Flores – who led Dolphins to a 24-25 record over three years – said on the podcast: “I think race played a role in my firing. What I mean by that is, there were things I was asked to do. There were conversations that were had.

“I was made out to be a difficult person to work with. I think my white counterparts wouldn’t have been asked to do the things I was asked to do.”

Flores did not offer specifics on what the Dolphins asked of him that he considered racially-based.

The 40-year-old is now on a staff led by Mike Tomlin, one of three Black head coaches in the NFL alongside Houston’s Lovie Smith and Miami’s Mike McDaniels, who identifies as biracial.

Flores interviewed for the Houston job that ultimately went to Smith and has maintained he was not hired because of his pending litigation against the league.

Pittsburgh general manager Kevin Colbert insisted earlier this week that Flores’ hiring was based on his success, with the Brooklyn-born coach wining four Super Bowl rings during his time on the New England Patriots staff and making the defensive calls during a 13-3 win over the Los Angeles Rams in 2019 that gave the franchise its sixth title overall.

Colbert said: “I think (the hiring) says that we hired a very good quality defensive coach that can maybe help us win games and really beyond that, there’s nothing else to say.”

What is the Rooney Rule?

The Rooney Rule was introduced in 2003 as a means of ensuring minority coaches would be interviewed for high-level coaching roles around the NFL in the wake of the contentious firings of Tampa Bay Buccaneers head coach Tony Dungy and Minnesota Vikings head coach Dennis Green.

The rule is named after former Pittsburgh Steelers owner Dan Rooney, who was the former chairman of the league’s diversity committee.

Dungy had recorded just one losing season in his six years in Tampa, where he made the playoffs each year, while Green was coming off his first losing campaign in 10 years with the team.

In 2020, the NFL amended the Rooney Rule to stipulate teams must interview at least two minority candidates not associated with their own team for a head coaching vacancy. Also, one minority candidate has to be interviewed for coordinator positions as well as high-ranking positions in the front office, including the general-manager role.

“The Rooney Rule is intended to give minorities an opportunity to sit down in front of ownership, but I think what it’s turned into is an instance where guys are just checking the box,” Flores said.

“That’s been the case. I’ve been on some interviews in the past where I’ve had that feeling.”

Reinbold: The system is broken

Speaking earlier this month, shortly after Flores filed his lawsuit against the NFL, Sky Sports NFL’s Jeff Reinbold said: “The system is broken. You know the numbers: we have got one minority head coach in the NFL, one minority owner.

“The NFL has put forward programs trying to aid minority hiring and the bottom line is, it is just not working.

“Mr [Roger] Goodell is going to take the heat for this but, who is the National Football League? In this case it’s the 32 owners – they’re the ones that do the hiring and the firing.

“What Flores has brought forth is something that I think has been understood for a long time. For him to go and make these allegations public, and to sue the NFL, this has far-reaching ramifications.”