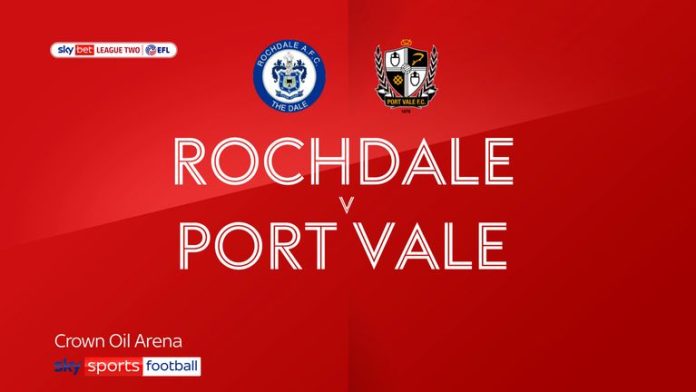 Rochdale snatched an unlikely point as James Ball scored a 93rd-minute equaliser in a 1-1 draw with Port Vale.

It was the home side’s first shot on target at the end of a game low on quality and goalmouth action.

The visiting fans went into the break singing as Vale got the breakthrough in the final minute of the first period. Chris Hussey’s corner into the six-yard area was met by an unmarked Ben Garrity who nodded comfortably beyond Jay Lynch.

To the dismay of their supporters, Rochdale struggled to test Tomas Holy in the Vale goal while the visitors almost doubled their lead midway through the second half, Joel Cooper’s effort saved by Lynch.

David Worrall was on target from the edge of the box but Lynch saved comfortably and in time added on James Wilson pulled one wide.

Dale had rarely been in Vale’s box all game but when the ball broke to Ball on 93 minutes he drove home wide of Holy.