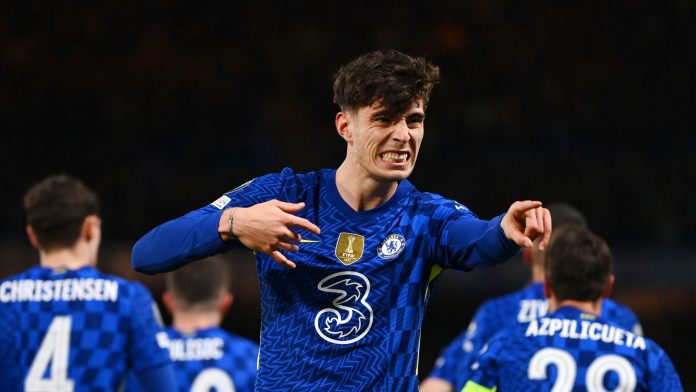 Seven touches on Saturday, none on Tuesday. The decision to bench Romelu Lukaku for Chelsea’s Champions League win over Lille only adds to the scrutiny on his Stamford Bridge struggles.

“If you have to force it then it probably doesn’t fit.” That was the social media message posted by Lukaku recently, leading many to wonder if it was a comment on his predicament. Under the lights with a trophy to defend, Thomas Tuchel stopped trying to force it.

“I am really pleased for Kai,” said Thomas Tuchel. His effort, work rate and the volume and areas of the pitch that he covers for us is immense and very good. He is never shy of defending.”

Tuchel may have highlighted Havertz’s defensive work but it is time to start calling him a striker. This is no false nine. He comes short and he vacates the space, but he also runs in behind and he scores goals that any forward – Lukaku included – would love to score.

There was a run across the near post, gambling on the ball coming in. There was a header directly from a corner, just the sort of chance a genuine No 9 seizes upon.

The first was missed and the second was scored against Lille. Both came inside the first 10 minutes. Midway through the first half, Havertz had enjoyed 15 touches of the ball – more than twice as many as Lukaku had managed at Crystal Palace at the weekend.

Why did Tuchel prefer Havertz to Lukaku? “We focused on intensity, high speed and hard work off the ball,” he explained. “Romelu struggled in the last games to deliver that.”

While Tuchel is understandably frustrated “almost every question is about Romelu” his own explanation for his selection decision damns the man Chelsea paid £97.5m to bring to the club.

Let us be clear about his credentials because it is too easy to suggest that Lukaku is simply overrated. This is the Serie A player of the year, a man with more than 100 caps for his country who is averaging 23 goals a season over almost a decade.

No foreign player currently playing in the Premier League has scored more goals in the competition – not Cristiano Ronaldo and not Mohamed Salah. Yet, at the age of 28, when he should be in his prime, the man who should have nothing to prove has it all to do.

Perhaps Tuchel’s comments when Lukaku first signed should have been a cause for concern. “I think, with the exit of Olivier Giroud, we could use a player used to playing with their back to goal, whose strength is to keep possession from long balls.”

That perception that Lukaku is a hold-up man, a target around which Chelsea could build their attacks, hinted at this role change from the outset. What Lukaku and his admirers would point out is he has never quite been the player that his physique suggests.

He is capable of that. The robust display against Arsenal in August, when Pablo Mari was effectively bullied out of the football club, was eye-catching but it was also atypical.

Lukaku has long been more comfortable when facing goal, running towards it, using his speed and strength to go past people. That counter-attacking game with Lautaro Martinez for company saw him rejuvenated at Inter after his struggles at Manchester United.

When former Inter forward Karl-Heinz Rummenigge noted Lukaku was showing “technical skills that were not seen so much in Manchester” this was what he meant.

Not only did Lukaku score goals, he created the most chances and completed the most dribbles. This was the player they were buying for a club-record fee and it was a player worth buying. The one they are deploying at Chelsea, not so much.

The contrast between the heatmaps from last season and this highlights the problem. At Inter, there was licence to roam into that half space, Lukaku’s favoured zone off the right wing where he could cut inside and thread passes or fire off shots of his own.

Now he has become a more peripheral figure precisely because he does not venture to the periphery of the pitch. Staying central, perversely, has meant staying out of the way.

Lukaku has gone from having three shots per game for Inter to having two shots per game at Chelsea. It is not a finishing problem, he just isn’t as involved. Playing in the width of penalty box and waiting is not his game – and it is not Chelsea’s game.

His confidence seems to have taken a hit. “Kai is in good shape and full of confidence,” Tuchel said of his alternative. The challenge Lukaku is facing now is that when the big games come and Tuchel wants intensity and movement he is likely to look elsewhere.

There was a telling line from the coach about his change of defensive shape before kick-off. “When in doubt it is always a reason to go with something that the team is used to.” It could just as easily apply to Lukaku. When in doubt, he could well turn to Havertz instead.

That is because Lukaku has not joined a club, as Diego Costa did in 2014, that was, in the words of Jose Mourinho, waiting for him. He has joined a club that had just climbed the mountain without him, signed to solve a problem not everyone will have felt existed.

To succeed at Chelsea, he will be expected to adapt to them not them to him.

Lukaku could yet earn a recall for the cup final, presenting him with the chance to win a first domestic trophy in English football. “Every game is different,” says Tuchel. “This was the decision for today. We have four days to recover and decide the team for Sunday.”

But it is Havertz, not Lukaku, who seems to have established himself as Chelsea’s go-to man up front.