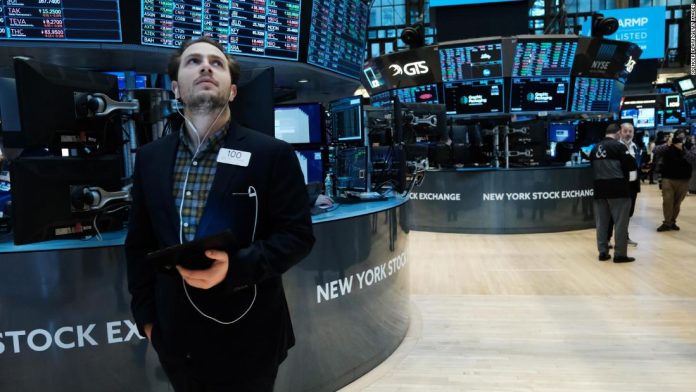 A version of this story first appeared in CNN Business’ Before the Bell newsletter. Not a subscriber? You can sign up right here. You can listen to an audio version of the newsletter by clicking the same link.
What’s happening: Global stocks swung on Tuesday after Russian President Vladimir Putin ordered Russian troops into two separatist pro-Moscow regions in eastern Ukraine. Countries including the United States are preparing to impose sanctions. Oil prices shot up, with Brent crude futures, the global benchmark, at one point topping $99 per barrel.
The unfolding crisis could set up another volatile trading day in the United States. The S&P 500 finished Friday down more than 9% from its January peak. If it reaches the 10% threshold when trading closes on Tuesday, it would enter a correction, which signals an unusually high degree of selling pressure.
While markets often look past geopolitical conflict, finding it difficult to price, this time is different. There are two key reasons.
1. Sentiment has turned: The mood among investors turned dour over the past month as soaring inflation boosted expectations on Wall Street that the Federal Reserve and other central banks would need to intervene more aggressively. If they sharply hike interest rates and start to reduce the number of bonds on their balance sheets, that would take away the main source of market euphoria since the pandemic hit.
An uneven earnings season, which triggered dramatic pullbacks in the stocks of household names like Facebook (FB) and Netflix (NFLX), hasn’t helped.
“Stock markets were already coming off the boil this year,” David Madden, a market analyst at Equiti Capital, told me. The prospect of a “tit-for-tat” sanctions fight only deepens the loss of confidence, he added.
2. It could hurt the economy: Russia is a major exporter of oil and gas. If the flow of energy is disrupted because of the conflict with Ukraine, that could weigh on the global recovery.
Germany, the biggest economy in Europe, is particularly exposed. On Tuesday, the country announced that it had halted the certification of the controversial Nord Stream 2 gas pipeline following Moscow’s actions in eastern Ukraine.
Fears about reduced supplies of oil and gas, which are already pushing up global prices, could also fan inflation.
“The worst-case scenario would be oil surging to $110 or $120, as the jump in energy prices could trigger chatter of a global recession,” Madden said. “Economies are gearing down from the [post-pandemic] boom, and the last thing they need is an energy shock.”
The Street’s view: Strategists at JPMorgan said in a note to clients Tuesday that while Russia-Ukraine tensions are unlikely to hurt profits for US companies, a jump in energy prices “amidst an aggressive central bank pivot focused on inflation could further dampen investor sentiment and growth outlook.”

Russian stocks plunged and the ruble slid closer to a record low on Tuesday as investors reacted to Putin’s decision to order troops into eastern Ukraine.
Moscow’s MOEX stock index dropped 4% on Tuesday after shedding more than 10% on Monday, bringing losses so far this year to over 20%, my CNN Business colleague Charles Riley reports. In total, more than $40 billion has been wiped off the value of Russian stocks this week alone.
The ruble fell toward 81 versus the US dollar, its weakest level in more than a year and close to its all-time low.
The moves prompted Russia’s central bank to announce measures to support banks, including a provision that will allow them to use last Friday’s prices for stocks and bonds when reporting their financial positions.
More pain could be on the way.
“We expect further declines near-term in the Russian stock market,” analysts at JPMorgan Chase wrote in a note to clients on Tuesday. The bank downgraded Russian equities to “neutral” from “overweight.”
Damage to Russia’s markets and economy would be limited if its troops do not advance beyond the parts of eastern Ukraine that Putin recognized as independent on Monday, according to analysts. But Russia would pay a higher price if a further escalation causes the West to respond with punishing sanctions that could cut the country’s banks off from the global financial system and make it difficult to export oil and natural gas.
“The impact on Russia’s economy will depend in large part on the response of Western governments,” analysts at Capital Economics wrote on Tuesday.
The most commonly discussed sanctions could knock 1% off Russia’s gross domestic product, they estimated, but more aggressive measures, such as blocking Russia from the SWIFT global payments system, could reduce economic output by 5%.

Carl Icahn is worried about pigs

Legendary investor Carl Icahn is known for his aggressive campaigns to shake up Corporate America. Now, he’s leveraging his reputation to tackle an issue close to his heart: the welfare of pigs.
McDonald’s (MCD) said over the weekend that Icahn had nominated two new directors to its board. The move “relates to a narrow issue regarding the company’s pork commitment,” the fast food chain said in a statement.
“I really do feel emotional about these animals and the unnecessary suffering you put them through,” Icahn said in an interview with Bloomberg last week. “A pig has a good brain and it’s a feeling animal.”
Why it’s notable: Icahn, who served as one source of inspiration for the larger-than-life character Gordon Gekko in the film “Wall Street,” has previously targeted companies such as Yahoo, Dell and Netflix. The goal in those cases was to make more money.
His latest campaign involves pushing McDonald’s to require all of its US-based pork suppliers to abandon the practice of keeping pigs confined in crates so small they can’t turn around.
Icahn has stated that he holds only 200 shares in the company, according to McDonald’s. The stake would be worth just over $50,000 based on Friday’s closing price.
Step back: McDonald’s first promised in 2012 to phase out the use of the crates, also known as gestation stalls, for pregnant sows. On Sunday, it said that by the end of 2022, 85% to 90% of its US pork will come from sows that aren’t housed in gestation crates. It expects to meet a target of 100% by the end of 2024.
But Icahn told Bloomberg that he got involved again because McDonald’s “never delivered” on its commitment one decade ago.
“We’re not going to fool around with them anymore,” he said.
Home Depot (HD), Krispy Kreme and Macy’s (M) report results before US markets open. Teladoc (TDOC), Toll Brothers (TOL) and Virgin Galactic (SPCE) follow after the close.
Also today:
Coming tomorrow: Earnings from Lowe’s (LOW), Molson Coors (TAP), TJX (TJX), Bath & Body Works and Hertz (HTZ).

Frontier Airlines no longer has a customer service phone line

The search for a missing mother surfaces claims of her lover’s...

Great Barrier Reef should be placed on the ‘in danger’ list,...

Frontier Airlines no longer has a customer service phone line

Ireland ‘at the mercy’ of UK for gas supply this winter