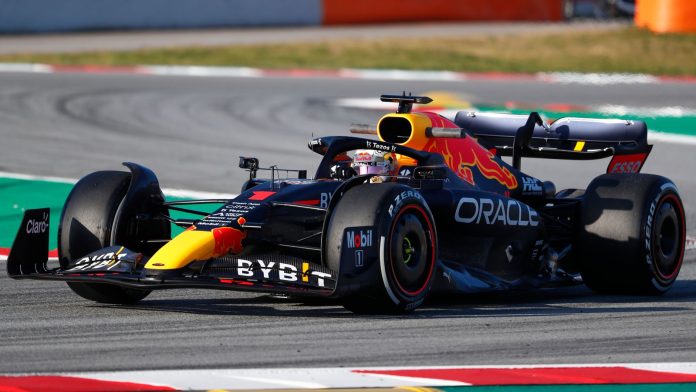 Red Bull, Alpine, Alfa Romeo and Haas revealed their 2022 cars on the opening morning of pre-season testing in Barcelona; world champion Max Verstappen one of the first drivers on track, with Lewis Hamilton to try out the new Mercedes in Wednesday’s afternoon session

The full fleet of 10 Formula 1 cars for the 2022 season were finally revealed as pre-season testing got under way in Barcelona on Wednesday morning.

The Red Bull of reigning world champion Max Verstappen was one of four cars that had not been unveiled ahead of the three-day stint in Catalunya.

Also revealing their cars for the first time under the heavily altered regulations for the 2022 season were Alpine, Alfa Romeo and Haas.

2021 world champion Verstappen was first out on track in the Red Bull, with the Dutchman having opted to take up the No 1 following his maiden triumph last season.

Sky Sports F1’s Ted Kravitz was immediately impressed by the new car, calling it the “big story of the morning” and adding: “The Red Bull has all the bells and whistles on it. It is something very, very different.”

All the usual caveats for F1 testing… The laptimes don’t matter, the cars won’t look the same when we go to Bahrain, don’t know engine modes or fuel weights…

However, the two car designs that have made everyone immediately go WOW are the Merc and Red Bull! #F1Testing #F12022

Meanwhile, Lewis Hamilton, who will be driving the new Mercedes in the afternoon session, was also keen to take a look at the car of his main rival from last season.

Two-time world champion Fernando Alonso is giving the Alpine its first outing of the year, and like Verstappen, the Spaniard is expected to drive both the morning and afternoon sessions on Wednesday.

In what might be the most eye-catching livery we’ll see in Barcelona, the camouflage Alfa Romeo has taken to the track. Lewis Hamilton’s former team-mate Valtteri Bottas will drive his new car for the first time this afternoon, but this morning its Robert Kubica at the wheel.

It is just a Barcelona testing livery, with the team set to reveal their season colours on Sunday.

After a torrid 2021 campaign, Haas will be hoping for a new dawn under the altered regulations. They were the first team to reveal images of their 2022 livery in early February, although Wednesday marked their official launch.

What about the rest of the cars?

F1’s biggest-ever rules overhaul has seen the cars transformed for this year – as the sport bids to improve wheel-to-wheel racing and overtaking.

Running from Wednesday morning until Friday evening, all 10 teams and all 20 drivers will take to the track, eager to see how their new cars perform and where they stand on the timesheets.

With so much change and so little time before the new campaign – there is one more three-day test in Bahrain before the first race on March 20 – this opening week of pre-season testing is more crucial than ever.

How to follow the first test on Sky Sports F1

While the first test is not televised, Sky Sports F1 will still have you covered.

On all three evenings, there will be a testing wrap featuring the highlights and best bits from the day on Sky Sports F1 at 8pm, while Ted Kravitz is back with Ted’s Notebook at 8.30pm.

A dawn-to-dusk live blog will also be available on the Sky Sports digital products for every day of testing, along with features, insight and reviews.

Regular updates from Barcelona will be published on our social accounts, while Craig Slater will be delivering reports from the Circuit de Catalunya for Sky Sports News.