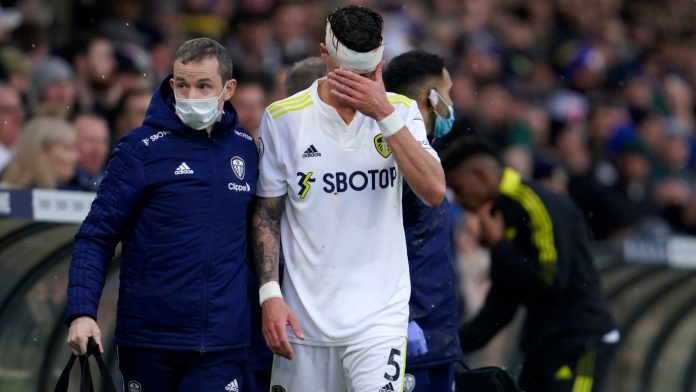 Football’s lawmakers have been accused of showing a “reluctance to change” as brain injury association Headway calls for the introduction of temporary concussion substitutes.

A spokesperson for IFAB said on Tuesday that the matter would be discussed at its annual general meeting on March 3 but that “at this stage, changes to the protocols are not foreseen”.

Leeds defender Robin Koch was left covered in blood after clashing with Scott McTominay in the 12th minute of the Premier League game with Manchester United on Sunday, but returned to the pitch with his head bandaged before going down again and eventually being withdrawn in the 31st minute.

Football Association guidelines state any player who sustains a suspected concussion should immediately be removed from the pitch but both Headway and the Professional Footballers’ Association have already criticised the current protocols.

IFAB: ‘Changes to the protocol are not foreseen’

“The concussion trials will indeed be part of the discussions at our upcoming AGM,” IFAB told the Press Association. “However, at this stage, changes to the protocols are not foreseen.

“While all relevant football and medical-related feedback and data from the trial are being collected, the amount of information gathered so far is limited and insufficient to form any clear conclusions.

“At this stage, however, it is our understanding that additional permanent substitutes are the more appropriate way forward.”

‘Football, once again, shows its reluctance to change’

Luke Griggs, the deputy chief executive of the brain injury charity Headway says further changes are still needed when it comes to dealing with on-pitch concussion.

Now Headway has called on the IFAB to take the opportunity to make alterations to the current process and introduce temporary substitutes so any head injury can be thoroughly examined.

“IFAB has an opportunity at its AGM to review its protocol, yet even before the meeting it appears it has already decided nothing will change.

“What more needs to happen for football to accept that the current plan isn’t working?”

“Recent incidents involving Sadio Mane while playing in the Africa Cup of Nations, Leeds United’s Robin Koch in last weekend’s game against Manchester United, or even Benjamin Pavard while playing for France in Euro 2020, show that players displaying concussive symptoms are being allowed to play on.

“The argument against temporary substitutes appears to be the risk that concussed players may be allowed to return after a ten-minute assessment due to the potential for symptoms to be delayed in their presentation.

However, the current system is not preventing concussed players from returning to play. Instead, we’re seeing players return to the pitch because hard-pressed medics have just a few short minutes, in the intense cauldron and atmosphere of a packed stadium, to make their assessment.

What more needs to happen for football to accept that the current plan isn’t working?

‘IFAB has a chance to improve the way it treats concussion’

The charity also claims that, if IFAB does not consider the move, its commitment to tackling head injuries in football would be called into question.

Griggs continued: “Temporary substitutions would allow for assessments to be conducted in the quiet confines of a treatment or dressing room, without the team being disadvantaged.

“If the player fails the assessment, that substitution can then be made permanent. If they pass, and are allowed to return to the pitch, they should then be monitored closely – as they are under the current system.

“It’s another level of protection that would reduce the number of images we see of players forced to go down on their haunches unable to carry on due to the effects of concussion.

“IFAB has a chance here to improve the way it treats concussion. Failure to do so would call into question its commitment to the concussion principle of ‘if in doubt, sit it out!'”

“I don’t remember that, which I think says it all. At the time I had a complete blackout. I was on the floor and then as I came round, realised people were around me. Crazily, I played on in that game. I remember not seeing anything, I was just seeing shadows of players so very much before the major head injuries over the past few years.

Earlier this week, Headway claimed concussion protocols were not followed when Koch sustained a blow to the head in Leeds’ defeat to Manchester United on Sunday.

Headway said “enough is enough” and demanded answers from Premier League bosses after Koch was allowed to play on at Elland Road after suffering a head injury in a collision with Scott McTominay.

Leeds insist they followed the league’s protocol, which was devised by IFAB and were approved by football’s lawmakers towards the end of 2020, and that they have always supported temporary substitutions if injured players are at risk.

The concussion protocols in the Premier League have been

Football Association guidelines state that any player who sustains a suspected concussion should immediately be removed from the pitch, and extra permanent substitutions are allowed in such cases.

Robson-Kanu: Proactive action must be taken on concussion

Former West Brom forward Hal Robson-Kanu suffered a concussion during his playing days and told The Football Show what needs to be done to protect players.

Former West Brom forward Hal Robson-Kanu suffered a concussion during his playing days and told The Football Show what needs to be done to protect players.

“In terms of protocols around it, you have to protect the players because that subsequently led me to go for a scan in London the following week. I actually collapsed in the changing room after the game and went for a scan the week after and was ruled out for nearly eight weeks because of the severity of the concussion.

“The protocols around it – we need clear guidelines so if there is a concussion or there is a blackout or a clash of heads, there has to be time for that assessment to take place and so whether it’s a temporary substitution or concussion sub, ultimately the protection of the players is paramount.

“Do I look at the Premier League there? Do I look at the club? The physio? Everyone was trying their best and I think it’s just having the protocols in place. Everyone needs guidelines, everyone needs structure and to be on the same page of what to follow when there is a specific outcome or event. That ultimately wasn’t in place at that moment in time.

Warnock: Take decision out of the players’ hands

“Take the decision out of the player’s hands, that’s the big thing for me because all players don’t want to come off the pitch.

“They don’t want to come off in a game against Manchester United at a bouncing Elland Road in a game they know they’ve got to get something out of.

“The player is never going to say he wants to leave the pitch. It’s not going to happen and that’s when the physios and doctors have to say, ‘I’m sorry, but you’re coming off’.

“You could visibly see [he wasn’t right]. He could barely walk coming off the pitch and you think, ‘How have we got ourselves into that situation?’

“So we need to take it out of the player’s hands. I think that’s something we can all agree on because it’s the safety of the player.”

“The referee has to trust the doctor and the people who are assessing the player. It’s all down to them, they’re the experts.

“The referee is there to be informed and he was informed the player was alright to continue, so he can’t really go against that.”