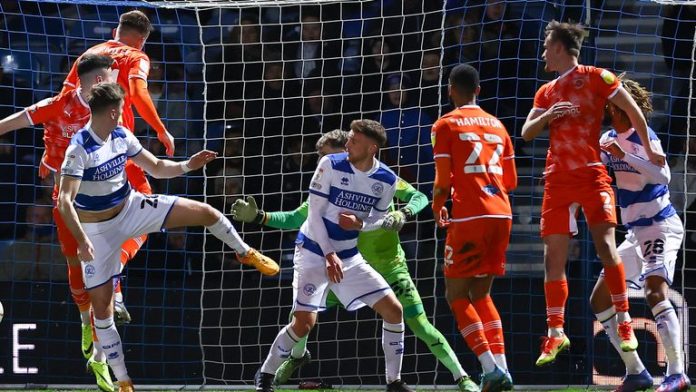 But Amos clinched Rangers’ first win in five matches, taking them up to third in the Sky Bet Championship table, just two points behind second-placed Bournemouth – although the Cherries have three games in hand.

Dunne headed in Stefan Johansen’s 31st-minute corner to put the hosts in front and seemingly in control of the game.

But Dion Sanderson was sent off following a clash with Reece James nine minutes later.

Sanderson dispossessed James with a superb challenge, prompting the left-back to sprint after him and scythe him down.

The on-loan Wolves defender reacted angrily, aiming – or at least motioning to aim – a headbutt at James, which was enough for referee Gavin Ward to brandish the red card.

It resulted in a tough second half for Rangers, although Yoann Barbet missed a great chance to double their lead just before the interval when he headed Johansen’s left-wing free-kick wide of the target.

Goalkeeper Seny Dieng produced a brilliant save to maintain their lead, clawing away Callum Connolly’s header from CJ Hamilton’s cross.

Dieng was unable to rescue Rangers when Dunne failed to clear Jordan Thorniley’s punt into the box and Connolly nodded the ball back to Bowler, who volleyed home.

But QPR hit back, with George Thomas running onto Moses Odubajo’s ball over the top and crossing from the left for fellow substitute Amos to score at the near post.

With his team having struggled of late and with Scotland forward Lyndon Dykes out injured, Rangers boss Mark Warburton decided to start without a recognised striker, leaving Charlie Austin and Andre Gray on the bench and deploying Chris Willock as the main attacker.

Rangers again struggled to create clear-cut chances in the first half, and Sanderson’s dismissal led to Willock being replaced at the interval by a defensive player in Dominic Ball as Warburton’s side looked to protect their slender lead.

They defended nervously but soundly until Bowler netted, and showed excellent resilience to recover from that blow to take three points which took them above Blackburn – who they visit this weekend – and increased the pressure on Bournemouth.