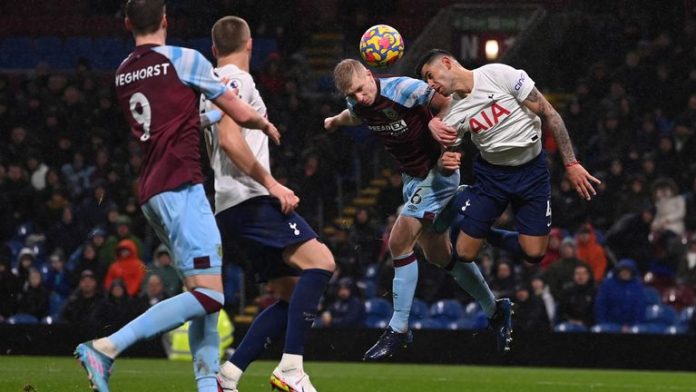 Burnley boosted their survival hopes as they made it back-to-back Premier League wins with a 1-0 home victory over Tottenham that severely dents the visitors’ top-four ambitions.

Ben Mee’s towering header (71) made it consecutive league wins for the first time since January 2021 after they had won 3-0 at Brighton on Saturday.

Burnley’s captain scored the winner at a very wet and windy Turf Moor as he climbed above Cristian Romero to nod home Josh Brownhill’s free-kick.

Harry Kane came closest to scoring for Spurs as he headed Heung-Min Son’s free-kick against the bar two minutes into the second-half.

But Burnley comfortably held on after Mee’s goal to move up to 18th and within two points of safety. Sean Dyche’s side also have a game in hand over 17th-place Newcastle.

Meanwhile, Spurs remain seven points off the top four after a frustrating defeat for Antonio Conte’s side, who failed to follow up on Saturday’s stunning 3-2 win at Manchester City.

Both teams had come into the match full of confidence from their impressive results at the weekend.

Spurs came close to taking the lead within seconds of kick-off as Kane’s cross-come-shot, that left Burnley goalkeeper Nick Pope completely wrong-footed, deflected off the returning James Tarkowski and hit the side-netting.

But that was as troubled as Pope would be in the first 45 minutes as Tottenham rarely threatened.

The home side were the team on the front foot as they pressed and harried Spurs, but despite their pressure Burnley could only test Spurs goalkeeper Hugo Lloris through Brownhill’s speculative volley from outside the box.

Just two minutes into the second half, Kane rattled the bar with a header as Spurs upped their intensity.

But it was Burnley who took the lead in the 71st minute thanks to Mee’s powerful header that gave Lloris no chance.

The home side then should have doubled their lead 12 minutes later, but Jay Rodriguez, who was in the starting line-up for the injured Maxwel Cornet, fired over from close-range after being set up by goalscorer Mee.

Tottenham’s last three league wins had come courtesy of 90th-minute winning goals, but there was no such late show here for Conte’s side, as they failed to create any real chances after Mee’s header.

Rock: Beau will bring a lot of trouble at Worlds I The players talk ‘Beau ‘n’ Arrow’