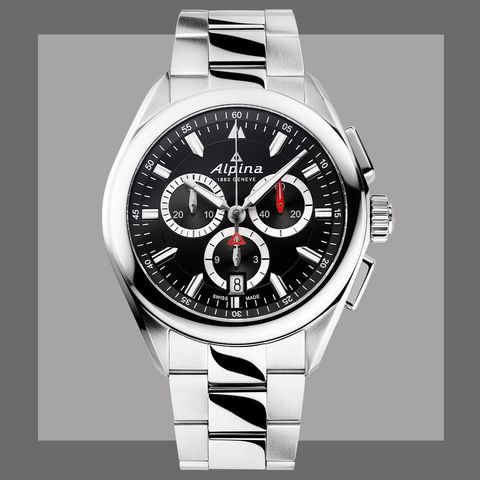 Sport is a fairly obvious arena for watch brands to be active in, playing on the need for toughness and functionality. So it’s surprising perhaps that alpine disciplines like skiing and snowboarding get relatively few watches to call their own. Fortunately, the appropriately named, Geneva-based Swiss brand Alpina has just the answer in its Freeride World Tour Quartz Chronograph, a limited edition of 100 pieces just released for 2022.

As a brand, Alpina, which dates back to 1883, has long been a bit of an insider’s go-to for its robustly designed sports watches at reassuringly accessible prices. It’s a brand we take a frequent liking to for its no-nonsense design and clean aesthetic.

The Freeride World Tour, now in its fifteenth year, pits skiers and snowboarders against extremes of terrain in a rolling competition that this year culminates in the final Xtreme Verbier at Bec des Rosses above the Swiss ski resort of Verbier. Alpina has sponsored the Freeride World Tour for four years, each year marked with a special edition. This time, for the first time, Alpina introduced a chronograph function to that special edition. The watch draws from a long line of tough sport watches that began as early as 1938, when the brand released its first Alpiner 4, a watch that combined four key qualities of a sports watch: it was anti-magnetic, shock-resistant, waterproof, and made from stainless steel.

The new 42mm Freeride Chronograph features three sub-dials at three, six, and nine, outlined in steel rings on a black dial. The Freeride World Tour logo sits at twelve o’clock. The watch is delivered on a stainless-steel bracelet with alternately brushed and polished links, giving it an elevated but unfussy feel. Inside, a quartz movement delivers superior shock resistance to a mechanical movement and remains fully functional for a four-and-a-half-year span without needing a change of battery. Its solid case back bears an engraving of the Bec des Rosses mountain course, the World Tour logo, and the all-important X/100 serial number. Because much like downhill competitors, truly devoted watch collectors want to know where they stand on the leaderboard.